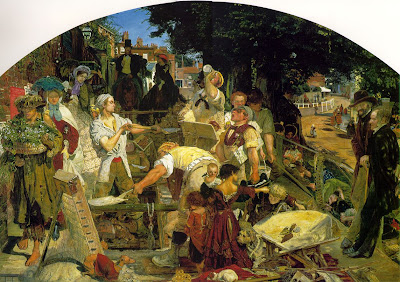 I'm now in the third week of my new job and although it's exhausting, I'm enjoying every minute. I can't believe that someone is actually paying me to sift through boxes of secondhand books.

The books arrive in plastic totes (when did the word tote appear on the scene? What's wrong with box or crate?) and each one usually has at least one book that is worth selling. In the last ten days I have found first editions of novels by Dickens, Maria Edgeworth, Hemingway and Roald Dahl, plus some really strange textbooks that have turned out to be worth hundreds of pounds. I now have to find the most effective way of selling them.

Discovering what is valuable and what isn't has been a fascinating experience. Why is a first edition of Nevil Shute's On the Beach or TS Eliot's Murder in the Cathedral worthless, whilst a sixth edition of a textbook on radar can fetch £60? I know that the answer is supply and demand and that technical books have small print runs, but surely there is more demand for Eliot?

Perhaps the least popular genre is poetry. I would have expected an 1868 collection of poems by Tennyson to be worth a few quid, but you can buy books like this for a fiver. Even more modern poets don't fare that well, with a first edition of Lawrence Durrell's collected poems selling for around £4.

The Victorians seem to have lovd their poetry, but there was one thing they liked even more: The Pilgrim's Progress. I have never seen so many copies in my life, all of them worthless. They will be recycled into something more useful, as will the numerous book club editions that literally aren't worth the paper they're printed on.

I had been afraid that after a year of leisure I would have trouble reacclimatising myself to the world of work. However, the simple fact is that if a job's interesting and you respect your employer, work can be a pleasure as well as a necessity.

I realise that at some point it may all change, but for the moment I'm enjoying the ride.
Posted by Steerforth at 9:03 pm

What a fascinating job! Lucky you!

I'd be happy to pay for that copy of 'On The Beach' - my mother had a hardback copy and it's the first 'proper' book I read in my early teens - I loved it, and the film version - which I think is sadly neglected.

Yes, I always wondered about the very odd discrepancies between book values that seemed unrelated to age, condition and presumed (on my part) desirability during my 8 year stint as an Oxfam Bookshop volunteer. I did make it my job to ensure all the quirky titles such as 'Insects From Shakespeare' went straight in the window though and was gratified to find the bulk of my choices were sold by the end of the day! Extraordinary jackets were also popular in Oxford, for which you also seem to have an excellent eye!

I can see that your employer has hired the perfect man for the job, so it is definitely in his interests to keep you happy! Does he know of your blog? Or is that the basis on which he realised you were the ideal man for the job?

Richard, if I'd known that I would have kept if for you. If I find another copy, I'll let you know.

Laura, my employer doesn't know about the blog and although I have nothing but good things to say about the job, I always prefer to draw a line between work and play.

Sounds like you've got the ideal job, you lucky sod you.

If you come across any decent copies of works by Marx, Engels, Lenin, Trotsky or other famous lefties, please drop me a email as I'd be very interested in buying them. Not sure that you'll get much for them.