'In the United Kingdom, Garden leave (or gardening leave) describes the practice whereby an employee who is leaving a job (having resigned or otherwise been terminated) is instructed to stay away from work during their notice period, while still remaining on the payroll.' - Wikipedia

What Wikipedia didn't mention was that Garden leave is usually only taken by senior management. Anyone lower down in the pecking order isn't considered worthy of such treatment and the terms of their departure are far less favourable.

I officially left my last job on May 17th 2008, but actually hadn't done a day's work since December 15th 2007. I had decided to award myself Garden leave.

Two years ago my garden looked as if it belonged to someone in an advanced state of psychosis. I remember seeing a documentary about a man who slowly lost his mind and started hording things to the point where he was unable to find a way out of his house. At some point his plumbing broke and he started to defecate in his own garden. I was appalled, but little did I know that my garden would start to look quite similar: 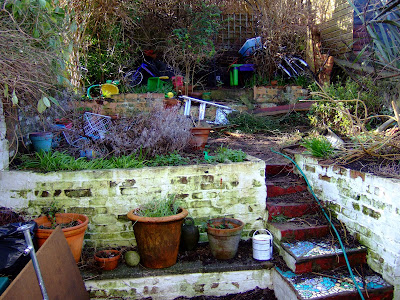 This isn't the garden at its worst. At this point the rats hadn't appeared, but it's pretty awful. I had just had some major building work take place and the garden had been used as a temporary dump. Left unattended for months, the garden quickly deteriorated into a post-apocalyptic landscape, rather like that town next to Chernobyl. It got so bad that I didn't see how I could ever have the time or energy to change things.

Fortunately, my former employer did me a huge favour. They presented me with a wonderful opportunity to take Garden leave; literally. The moment I stopped work, I started digging and began with a Soviet-style scorched earth policy: 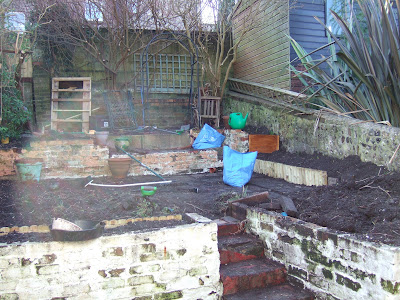 I then set myself a budget of no more than £500. Was it possible to transform a garden for so little? I started by going to the local dump, where I was able to requisition paving stones and wood. This was followed by seeds and plants, none of which cost more than £5. Finally, I bought an Asda patio set for £95 and a play house for £130. Here is the finished result: 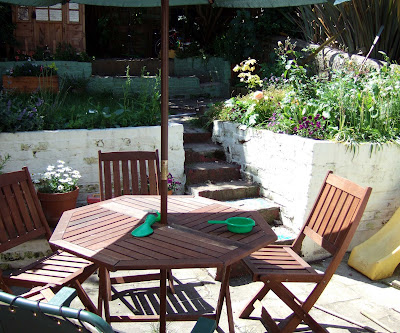 It won't win any competitions, but it is a big improvement on the radioactive wasteland that preceeded it. I have gone for the 'cottage garden' look (i.e throwing handfuls of seeds on the ground and seeing what happens) 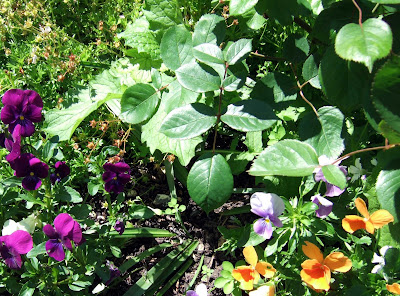 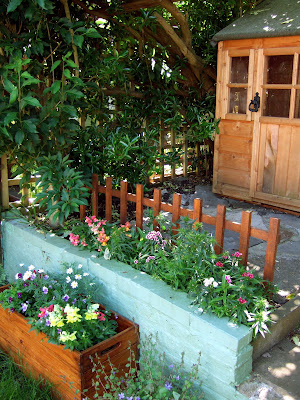 I built the fence myself. I feel like a real man now. 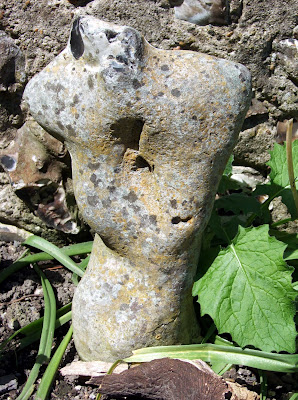 This is a stone I found on a beach when I was 17. It looks more like a sculpture. 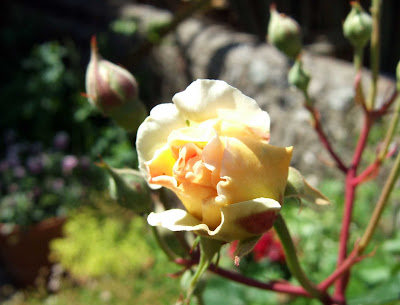 It's a small garden and a rather strange one, as it backs onto the upstairs bedroom. Lewes is built on a medieval grid of streets and in the Middle Ages, people tended to have courtyards rather than gardens (he wrote, not really knowing if it was true). But if I need space for my boys to run around, there are two huge fields within five minutes' walking distance, overlooked by Lewes Castle: 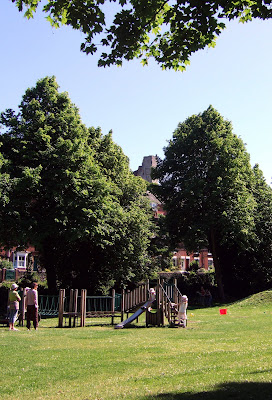 It's not the perfect answer. My two sons would be happier living in the countryside, but as urban environments go, I can't think of many places that offer more than Lewes.
Posted by Steerforth at 7:49 pm

I was going to leave a comment about how good your garden looks now and how I wish I could be bothered to transform our own in the same way, but it seems that comments to this post have to be non sequiturs of some kind. In which case:

You've done a splendid job Steerforth. I've feeling rather virtuous myself as have just mowed lawn and cut down all the bushes. Will sort out the garden furniture when money permits.

Your boys sound well provided for with the large fields nearby. And they are getting a wonderful quality of life per se in Lewes with nicer people and slightly higher standards of behaviour around than many places.