I'll never work in an office... 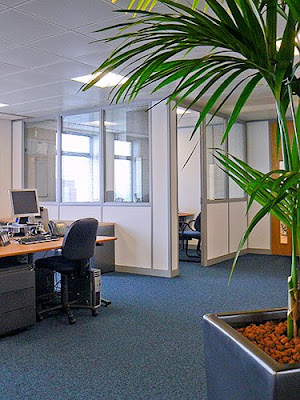 For most of my working life, I have been adamant that I never wanted to work in an office. I worked in one briefly when I was a student and felt like a battery hen. I hated the pointless regulations, the lack of natural light, the obsession with air conditioning and the constant whinging and backbiting. In a moment of desperation, I set fire to a sign that said that the building was completely fireproof.

Bookselling offered an escape. It was like an extension of university and, on the whole, a bullshit-free environment. I really appreciated the fact that there were so many different facets to the job, from the cerebral to the mundane. One minute I'd be talking to John Calder - Samuel Beckett's publisher - the next I'd be boxing-up a return of unsold stock.

People wondered how I managed to survive on such an appalling wage, but I felt that it was a price worth paying for not having somebody mess with your head (man). But then Waterstone's bought Ottakar's and it felt as if the bullshitters had taken over. Books became 'product'. Manangers' meetings started to resemble Communist Party conferences in the Soviet Union, with people clapping nervously at ever banal utterance from the platform.

The same thing was happening in publishing. The days of long, liquid lunches and golf on Friday were long gone, as the accountants moved in. I'm appalled to read that, according to today's news, publishing is the booziest industry in the UK, because today's publishers are a picture of sobriety compared to their predecessors. When I started in bookselling I used to hear tales from the 1960s that made me wonder how any books ever got published.

I left bookselling feeling fairly certain that I'd never work with books again. I was also resigned to the depressing prospect of working in an office. But guess what? I was wrong.

I love working in an office. I like the fact that somebody else is responsible for the minutiae of running a building: the health and safety regulations, the fire and security alarms and the cleaning. I love not having to worry about whether the staff are happy and motivated and it's absolute bliss not having to deal with the public. I don't even have to worry about the authors, because they're all dead. Fantastic!

It's just me and the books.
Posted by Steerforth at 6:29 pm

At twenty, when one can't quite imagine the end of blissful evenings arguing about poetry in the tawny twilight, the idea of working in an office is utter death. Yet at forty, it's quite unexpectedly blissful, I agree. And whilst I might spend too much time slaving over a hot spreadsheet, and too little time talking about Verlaine, there's a solid comfort in it. And always someone to talk to. Is it the work equivalent of the pipe and slippers, I wonder? Have I become old (no, i've had a look, the trousers are not rolled)

It is impressive that you knew what you wanted from such a tender age Steerforth.

And even more impressive, that you have now got it.

Hope for us all, maybe. I hope your wages are also a bit more decent!

Publishing is a shambles - I'm working on a TV programme idea viz-a-viz a possible solution.

I’m doing online PR for Gallic books. Great new title:
Check Out, A life on the Tills.
Might be interesting to you because she(Anna Sam) started with a blog as well...

Now a huge hit in France, looking to get noticed here...

Would you be interested in doing a book review. I can send you more material and details.