It may be very rewarding to discover a first edition of Nicholas Nickleby, but nothing can beat the pleasure of coming across books like this one, which I found this afternoon: 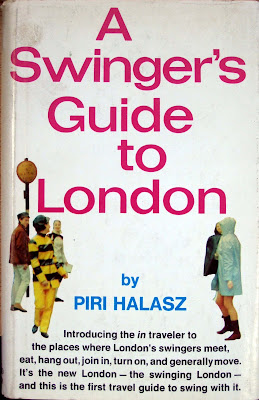 Published in 1967, this book comes from an era when 'swinging' had less sordid connotations.

According to the blurb on the jacket, this book is a "go-go mini-guide to the new swinging London of today, essential to the traveller who wants to taste the delights of a world capital that has kicked off its sensible shoes and traded its tweed for vinyl. The key question is...'Where's the action and how do I get in on it?' Simply fab."

Getting in on the action seems to involves finding the 'scene' and if that sounds as elusive as Tarkovsky's 'zone', you're quite wrong. There's even a map, showing visitors the grooviest boutiques, discotheques, casinos and, rather intriguingly, auction houses: 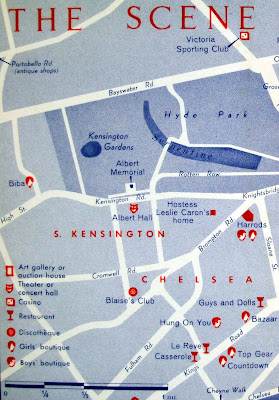 Beyond its banal exterior, this is actually a well-written and informative guide to London and it gives a fascinating glimpse of a city that was undergoing a huge social transformation. I'm not sure about the author's credentials when it comes to Swinging London though; she looks far too sensible: 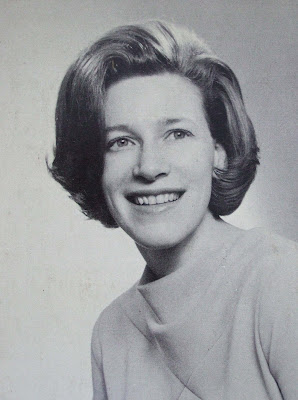 Can you see her smoking 'pot' whilst listening to Within You Without You? I can't.

My favourite part of the book is a map of Britain for foreign swingers. It is a masterpiece of economy: 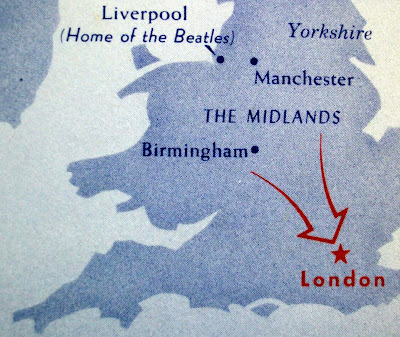 I say Britain, but anywhere north of Liverpool is deemed terra incognita. London is where it's at.

It's interesting how the myth has replaced the reality and to anyone under 50, the term 60s London conjures up a groovy, Austin Powers-style montage of mini skirts and kaftans. However, whenever I watch documentary films from the period, I'm struck by the conservatism of the clothes and the depressed look of many streets, which still bore the scars of the Blitz.

If there was a scene, I'm not surprised that you needed a guidebook to find it.
Posted by Steerforth at 8:45 pm

I loved this! Would love to leave witty and apposite comment but alas it's late and all wits have deserted. But what a genius find.

Brilliant book, sounds like a textbook to accompany the film 'Smashing Time'

London - where's that? You should see documentaries of Liverpool in the 60s - now that was swinging. Unfortunately nobody did documentaries - we were all too busy enjoying ourselves.

Dare I say that looks like a huge cock pointing toward London (aka Swingsville) in that delightfully 'economical' map where little else seems to exist anyway, so how could one miss it?

Love the author pic - yes she looks like an early Blue Peter presenter rather than any sort of 'swinger' - even in the more innocent incarnation of the word.

Laura, I'm fluttering my hankie like a Regency fop. I dread to think what you'd be like on a Rorschach test!

Richard, I just visited your link and it looks fab!

Foppish modesty from a gentleman who buys a 'Swinger's Guide'...?

Ok, phallus then. But 'tis not me who drew it on the map.

I shall stop reading Viz soon though. Pretty disgraceful behaviour for one of my otherwise maturity.