How the mighty have fallen... 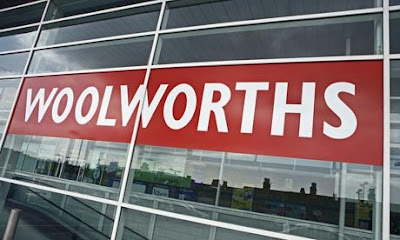 Anyone over a certain age will remember the excitement generated by the Woolworth's Christmas commercials. Lasting for two whole minutes, they were a television event and people made of point of tuning in to see which celebrities would be appear. As a boy, I found these adverts only marginally less thrilling than the Christmas double issue of the Radio Times. Perhaps I should have sniffed glue after all.

I never thought I'd feel sad to see the demise of Woolworth's, but they had become part of the culture. Woolies, Pick n'Mix (or Pick n'Nick, as we called it) and the bright, smiling, sales assistants were as quintessentially British as dry rot. Okay, I lied about the staff. The sales assistants generally came across as lobotomised, but that was probably a legitimate reaction to what was essentially a dead end job.

My mother worked on the tills at Woolworth's for 16 years. She took her job very seriously and was always extremely cheery and competent, in spite of a management culture that regarded it's shop floor staff as scum. One Christmas she received a bonus of 50p. Even in those days it was bugger all and to add insult to injury, it was a Woolworth's voucher.

Shortly before she left, my mother was sent on a course which informed staff that they would have to wear blank badges. Sales assistants giving good customer service would be awarded 'warm fuzzies' to add to their badge, but anyone who was less than manic would be given a 'cold prickly'.

Another reason for hating Woolworth's is that they were the Tesco of their time, driving small shops out of business by providing a one-stop-store with cheaper prices. But in spite of all this, do they deserve to go bust?

The commercial below is, I think, from 1980, when Woolworth's were at the height of their powers. They were the major retailer in Britain - the only high street store with the audacity and clout to feature so many A and B-list celebrities in their two-minute commercials. There's Derek Nimmo, Tim Brooke-Taylor, 'Diddy' David Hamilton, Anita Harris (C-list, even then) Magnus Pike, Jimmy Young, Ed 'Stewpot' Stewart, Leslie Crowther and Kenny Everett, to name a few, and strangely, they had much more kudos than their equivalents in today's celebrity-obsessed age.


Is that Bernard Cribbins doing the sprechstimme?
Posted by Steerforth at 12:01 am

Try Woolies in Stornoway on the Isle of Lewis if you are ever up there. They may be the exception that proves the rule but the staff there are helpful, smiley types. Or they were until the future became so bleak!