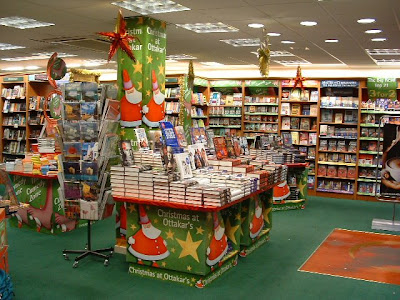 There's an interesting article in the Bookseller, claiming that literary agents are 'struggling to sell début and literary fiction, with novels taking longer to sell to publishers and more failing to find a buyer at all'.

I can't say I'm surprised. The sales figures for new hardback literary fiction have never been great and since the demise of the Net Book Agreement, the situation has got worse: if a novel isn't price promoted then it's hardly worth taking it out of the box.

The hardback fiction table used to be the jewel in the bookseller's crown. It would always occupy the prime position on the shop floor, whilst (with a few exceptions) non-fiction titles would be tucked away in dimly-lit nooks. Sordid little publications like celebrity memoirs were usually displayed upstairs, preferably spine-on.

Then a number of things changed. First, new high-tech stock control systems taught booksellers that the latest Milan Kundera novel was no.67 in their top 500 titles, whilst a diet book by an Eastenders actor they'd never heard of was no.8. Second, the book trade was invaded by people who knew nothing about books and were only interested in what was selling. Third, Margaret Thatcher and her cohorts redrew the ideological map of Britain, replacing quality with quantity. Fourth, the end of price fixing widened the gap between the bestsellers (or 'superlead' titles as some publishers like to call them) and the less commercial books.

These factors have created a climate in which publishers and booksellers are less inclined to take risks and the end result is not fewer and better books, but a lack of innovation.

Twenty years ago, a publisher could justify printing a new literary novel by an unknown author on the grounds that they believed that X had great potential and in three or four novels' time, would achieve critical and commercial success. In the meantime, X's loss-making novels were effectively subsidised by the bestselling titles. There was also a view that even if X wasn't a commercial success, they added credibility and prestige to a publisher.

To some extent that view still prevails and publishers do take risks with new, unknown authors. However, today it is rarer to see writers indulged in the way they used to be and unsuccessful authors risk being dropped before they have really found their voice.

What can be done? One answer would be to stop publishing new fiction by unknown writers in hardback, as readers are more likely to buy a £7.99 paperback than a £20 hardback. Publishers don't like doing that because the critics generally ignore paperbacks, but if enough new writing was published in this format then hopefully the reviewing culture would change.

As a bookseller I felt like Brian Hanrahan when it came to new hardback fiction titles that were sold at full price: I counted them in and I counted them out. No sales, plus the cost of sending the titles back to the publisher, who'd either remainder them or have the books pulped. If the rest of the shop had been run on this basis, we would have gone out of business within months.

However, publishing in paperback isn't enough. Unless a new writer is lucky enough to receive fantastic reviews or the endorsement of a book club, they will still struggle to reach the reading public. If publishers and booksellers truly believe that new titles are worth stocking, the reader needs to know why. Bunging a new novel in the latest 3 for 2 promotion will just mean that X is lost in a crowd of more familiar names. I'd like to see the traditional hardback fiction table replaced by a selection of the new and unfamiliar.

I also wonder if the book trade is too busy chasing the zeitgeist, looking for the next Da Vinci Code/Bridget Jones/Harry Potter when they should be trying to find the best new writing. I don't know. I'm not a publisher and my knowledge is anecdotal, gleaned from years of listening to sales reps complaining about being asked to sell the unsellable.

It all sounds rather bleak, but I would argue that this is a fantastic time to be a reader. The culture of blogging and easy availability of out of print and cheap books on the internet has created a vibrant new reading culture in which titles are promoted soley on merit. It is the ultimate free market: democratic, unregulated and borderless, presenting many opportunities for authors to connect directly with readers. If new writers are having trouble getting published, then it isn't necessarily the end of the story. Veni Vidi Blogi!
Posted by Steerforth at 7:16 pm

I recently visited the Borders in Adelaide for the first time in a while, and was intrigued to notice that, except for the piled-high 3-for-2s at the front of the shop, EVERY OTHER BOOK had its price jacked up by 10% over the RRP.

The reason, according to someone who works there, is that, "We're the only bookshop in Adelaide that allows extended browsing, so the cost of that needs to be included in the price of the books." Which is a very rich brand of bullshit.

Ah well, they're in financial trouble. Borders going out of business would not be the worst thing in the world.

If anything, Borders are worse than Waterstone's. They have complete central buying, making the shop staff little more than shelf stackers and till monkeys.

The 'external browsing' argument is, as you say, total bullshit and I'm surprised that anyone could have the nerve to suggest it.

Brilliant post Steerforth - I think that is a great idea re the way ahead.

I also think there will be a backlash against all this High Street homogenising in due course, in terms of outlets and samey products sold.