McCain vs Obama on Sim City

With the US election only a day away, I decided to conduct a scientific experiment using the computer game Sim City 3000. For those of you that live in blissful ignorance of these things, it's known as a God game, in that you are able to create a whole city and affect its development by tweaking your city's finances. Spend too little on public services and your citizens will leave the city to escape from escalating crime rates and poor health care. Spend too much and people will still leave, as the economy is buggered.

Yesterday I decided to test the two presidential hopefuls' policies in Sim City, establishing one city for each candidate.

Here is the John McCain city: 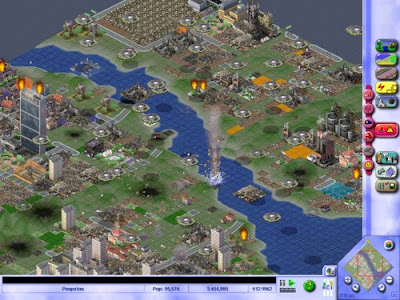 As you can see, the city is has been ravaged by terrorism and environmental problems. I can also see signs of a UFO attack, which would suggest that McCain isn't just content with alienating other countries. In the McCain city, there are plenty of employment opportunities for the emergency services and the military, but overall there are very few jobs available for the average citizen.

There were many theories about what the mysterious bulge was on the left side of McCain's face, including one suggestion that it was Lord Voldemort. Sim City doesn't provide an answer, but in our simulation McCain is now dead and Sarah Palin is talking about the 'end times'. 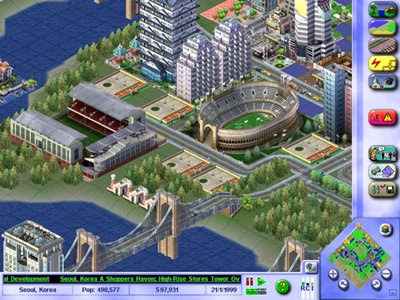 This city enjoys full employment, resulting in a low crime rate and a bouyant local economy. President Obama's enlightened foreign policy has guaranteed freedom from attacks by terrorists and instead a pursuing a new Cold War, the USA is working with the major powers to tackle climate change and develop a base on the moon for peaceful research.

As you can see, there is a good balance between civic spaces and commercial buildings, making this a very desirable place to live. The widening gap between rich and poor is now narrowing, thanks to Obama's prudent fiscal policies.

So there you have it: a conclusive computer simulation that will hopefully help the good people of America make the right choice tomorrow.

God Bless America.
Posted by Steerforth at 11:09 am

I can't decide if this is sheer genius, or sheer mentalness. I used to love the Sims, like creating doll house families so very familiar with the concept. But its wrong, but right, but wrong. Oh I don't know. Very good pictures of the towns though!

It was just a very silly idea that amused me. I didn't actually create any cities - I just pinched a couple of screenshots off the internet.

I wanted to write something about the US election, but found it impossible to do this without resorting to worthy platitudes, so I decided to come up with a unique angle on McCain and Obama...

Oh, I really believed you had done it, and it had worked out like that magically. Can't believe I am so gullible.

"I didn't actually create any cities - I just pinched a couple of screenshots off the internet."

Let me be the first to congratulate Steerforth for swinging this election in Obama's favour. Now get working on Obama v Palin 2012.

I feel the hand of history on me...