Postcards from the Front

My father's parents never had any money and when they died, a few weeks apart, they left a few bits of furniture, some jewellery, a couple of medals and a box of photograph albums. With the callousness of youth, I remember feeling quite cheated. I'd bargained on getting a few pounds to spend on my collection of Marvel comics. Instead, I inherited two boring old medals which weren't even worth enough to sell.

Later, when I learned about the First World War, I realised that the medals were priceless and understood what my grandfather had endured to earn them. At an age when he should have been learning a trade, he joined up and spent two years being shelled, shot at and gassed. When he returned to civillian life, he was only able to find work as an unskilled labourer. Working class soldiers were merely canon fodder and in 1918, there was no talk of 'a land fit for heroes'.

Among the photo albums my grandparents left are two collections of postcards from the First World War. Most of them were made in Britain, but there were also quite a few produced by enterprising Parisians, like this one: 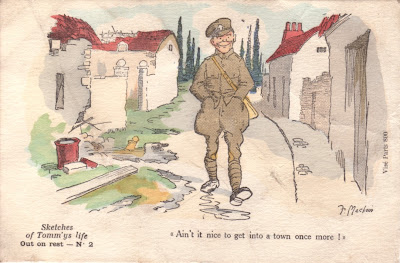 I have several other 'Sketches of Tomm'ys' life and it's quite striking how cynical they seem compared to some of the more maudlin, sentimental British postcards: 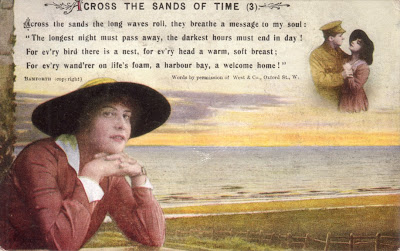 Cards like the one above were very popular, usually sold in a set of four, featuring the lyrics from a popular song of the time. They make a stark contrast with images like this: 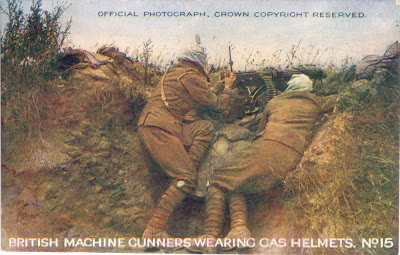 What's striking about the picture above is the fact that this harrowing image is an official photograph. I would have thought that this graphic depiction of modern trench warfare wouldn't provide much reassurance to the families of soldiers, but maybe people took comfort from the fact that 'our boys' were able to deal with anything the Hun threw at them. 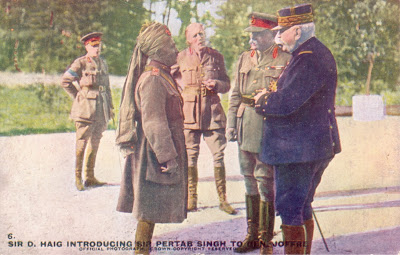 In my ignorance, I had no idea that there were Indian Knights of the Realm in those days. I like General Joffre's uniform. Apparently, when he was made Commander-in-Chief of the French forces, he'd never commanded an army in his life, which probably explains why he was so rubbish. 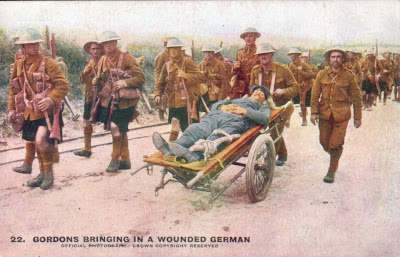 I love this postcard. 'Fritz' looks fairly nonchalant, as if he's looking forward to a long break from the horrors of the Front. But just in case you thought we were being too soft on the enemy: 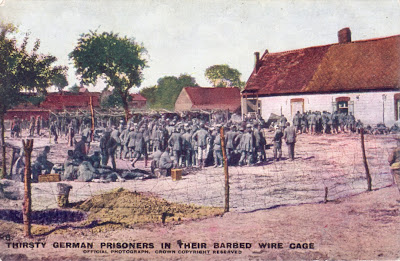 Thirsty German prisoners in their barbed wire cage. That'll show 'em! But what's that pile of dirt on the ground? Is Fritz trying to tunnel under the wire?
Posted by Steerforth at 7:29 pm

Amazing! A friend has a collection of hand-tinted postcards and even different versions of the same card, hand-tinted in different colours to pretend the sweethearts were wearing different clothes, some early in the war showing blood soaked war scenes, but more sanitised cards with less emphasis on death in glory by the end of WWI.
Young men home on leave would pose for many of these postcards, using their real-life uniforms and the same young men and women turn up again and again, depending on which photographic studio in which area was producing them. I have begged her to write a book on the subject - or even a drama about these photographic studios and what happened to the subjects!

My favourites are the really sentimental ones with soldiers and sweethearts. I also have a wonderful series called 'Don't Go Down in the Mine Dad'. Priceless.