A sense of place

Earlier this year a local man called Paul Wheeler was knocked down and killed by a car as he wheeled his bike across a busy road. The death sent shockwaves around the town, as Wheeler was the 'archbishop' of the Commercial Square Bonfire Society, but to relative newcomers like me, it was just another name I'd never heard of.

I realised that whilst I lived in Lewes, I was not a Lewesian. 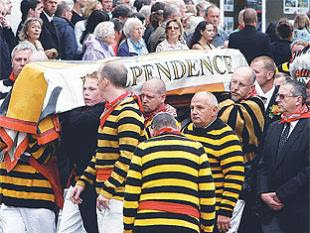 The centre of Lewes was packed during Paul Wheeler's funeral and although I felt conscious of being an outsider, I was glad to live in a town where individuals still mattered. The fact that Lewes could come to a standstill (with huge traffic delays) because people wanted to celebrate the life of a friend, reminded me why I moved to Lewes in the first place.

Recently, the magazine Viva Lewes published an extract from a tribute to Paul Wheeler that was written by a local artist called Peter Messer. I found it extremely moving. Messer's prose could, at times, have been written by Orwell or Betjeman and although you may find it nostalgic and sentimental, it encapsulates the spirit of Lewes: a town which still has a mind of its own and, in Sussex dialect, won't be druv by politicians or big business.

Here is an extract from Peter Messer's tribute:

We were neighbours for over ten years, good friends for many more and for seven years we shared an allotment (plot of land, for non-British readers) in Paddock Road. On the Sunday morning I'd heard he died, I was planning to meet him. The ritual never varied much; five minutes after the Archers' theme tune died away, Paul would turn up and we'd spend a quarter of an hour discussing the week's events in Ambridge. There'd be a bit of work, a bit of a chat, a bit more work, a rant, some weeding, some harvesting for Sunday dinner then a full five minutes' gloating self-satisfaction at what we'd achieved before adjourning to the Gardener's Arms.

Paul was a romantic and an escapist but a practical one. Instead of just dreaming about the atmospheres, artifacts and customs of the past, he recreated them as much as possible in his everyday life. He found much of contemporary life tawdry and alienating and he railed at its emptiness, yearning for something simpler, more essentially human, where comradeship and community meant more than social position and personal gain.

A life that revolved around good beer and food, and good friends and neighbours suited him down to the ground. Anyone lucky enough to have spent a Boxing Night with Paul and Dawn will have gained a brief insight into the things they felt to be important. No electric lights, just an intimate glow from a couple of oil lamps glinting from below his beloved old enamel signs, hung with plain holly and ivy from the allotment. Endless talk and laughter, drink and good homemade food over a background of hit songs from the forties.

If there is such a thing as heaven...I imagine Paul's as a kind of idealised cross between Lewes and Brighton in the 1930s, full of steam engines and coal smoke, advertisements for Kolynos Toothpaste, Robin Starch and Keatings Flea Powder. A heaven of thriving hot-metal printworks, manufacturers, bakers, brewers and other industries called Royal-this and Empire-that, with pie and mash shops, the Brighton Belle and Max Miller at the Hippodrome for One Night Only.

Bank Holiday cycle tripes out to rural pubs and tea-rooms, behind which stand the Downs, covered with Southdown sheep and seagulls forever following the plough. Steam-driven fairground gallopers, Harvest Homes and the singing of old songs. The pubs all full of dark wood and engraved mirrors, billycock hats, pipe smoke and pianos.

And if you heard laughter coming from inside, you'd certainly know the one Wheeler was in! Paul was an English Man with all that entails, but essentially he was a Sussex Boy. You can be a hundred years old in Sussex and still be a boy. 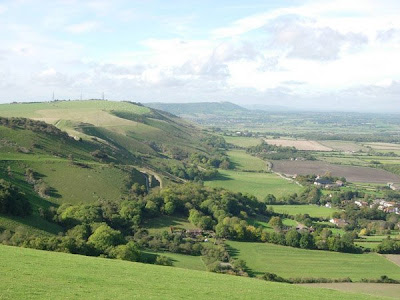 Posted by Steerforth at 5:59 pm

I hope that when I kick the bucket that somebody writes about me as warmly and as eloquently as you have about Paul Wheeler.

This is so sad. Kind of makes you wish he'd remained just a name, victim of a tragic accident that only ever happens to someone else.

Yes, I like the feeling of community in Lewes too. Pity there's still b*st*rd drivers around who mow innocent pedestrians down, even in Lewes though.

I have been a lurking reader, enjoying everything you write and ths has been a very moving piece. This is one of the reasons we want to move tp Lewes, Btn just lacks that sence of community.

It's a very beautiful and touching gesture. So goes your post. :)

I'm glad that this has struck a chord with others and it's nice to see two new names. I hope to hear from you again.

Emma - I hope you manage to find somewhere in Lewes. There is a sense of community here, but with Brighton only 15 minutes away you can have the best of both worlds.

I, too, have followed this story with a great deal of interest, as, like you, I live in Lewes, and have done so for some years, but am not from Lewes.

I did not know this chap but I agree that the town's reaction to his death was very moving.

And, certainly, the piece is a very beautiful and touching eulogy.

Bonfire breeds its own loyalty, and, again, there is an 'inside' and 'outside'.

I have marched with the reformed Southover Society for three years, and wrote and recited their society poem at the Southover Memorial for a couple of those years.

However, I would say for sure I am an outsider in the Bonfire world and always will be.

Nothing wrong with that, but I shall never be a true Bonfire Boy like the man who died.

Lewes does have a tenor all of its own and Paul Wheeler was a true part of that born and bred character; may he rest in eternal peace.

I've always fancied joining a bonfire society, but as you say, it's a local thing. However, if the societies are struggling with finding new members and 'incomers' want to become part of Lewes, then perhaps it makes sense to join in?

Well, yes, Steerforth. I would not have joined a Lewes bonfire society if it were not for the fact my fellow boozers at the local, the King's Head, were re-starting it after many years of hibernation - and asked me to lend my support in getting it going.

So, in a strange way, it felt like helping to begin a bonfire society rather than joining one, which, as a Catholic, I might well have hestitated at doing!

I grew up with Paul, went to the same school, hung around the same pubs...I'd like to think he'd have been delighted with your warm and generous tribute, but I suspect he'd have extracted the urine instead!