Don't let me die in Bexhill

As I have written in another post, Bexhill-on-Sea is one of those purgatorial, coastal towns where people go to die. It is a suburb without a city, in which the only sounds you will hear are seagulls, repeats of Inspector Morse, the slurping of thin, watery soup and the high-pitched drone of a pensioner driving at 27mph in first gear. People move here for the sea air, or so they say. I suspect that the real reason is that Bexhill induces a frame of mind that makes death a welcome release from the tedium of living there.

But Bexhill (which I visited yesterday) is also home to the De La Warr Pavilion - Britain's first public Art Deco building - which houses a superb gallery and cafe. As the building faces the sea, you can turn your back on Bexhill and enjoy views like these: 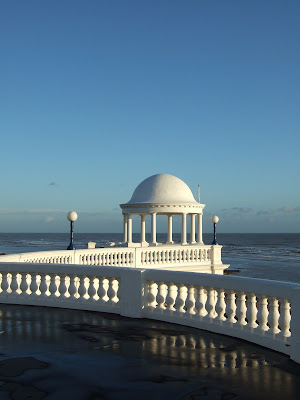 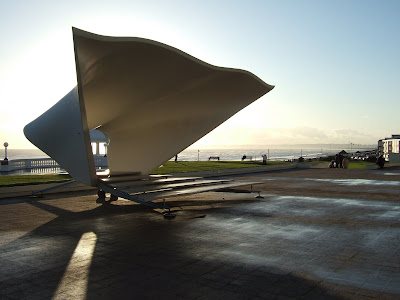 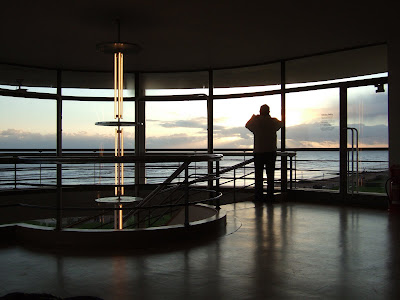 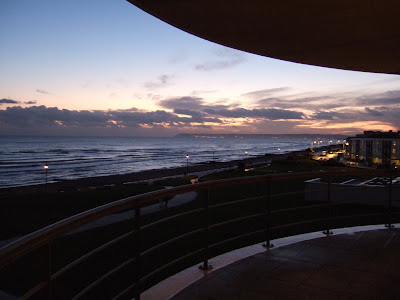 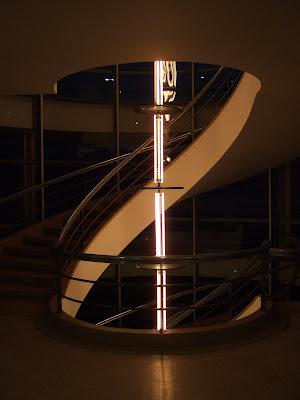 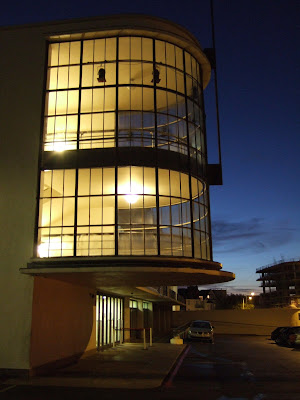 It is remarkable how the presence of one decent public building can transform a town, offering some hope of redemption. In a secular age, we desperately need places which are accessible to every member of a community. In most towns, this will mean visiting a shopping mall, cinema or leisure centre. Few are lucky enough to enjoy a really well-designed civic building that isn't owned by a corporation with a commercial agenda.

Walsall is generally regarded as one of the most appalling places in Britain. It enjoys the dubious accolade of being the fattest town in the country and, I suspect, also tops the league for teenage pregnancy. A few years ago an art gallery was opened slap bang in the middle of Walsall, replacing one that the local council had closed ten years earlier. Some people questioned the wisdom of spending £21,000,000 on an art gallery in such an unreceptive environment, but this is missing the point. Even if people can't see the point of art, if you give them a decent public building they will use it.

I think it's safe to say that not many of Walsall's residents will be enticed by a current exhibition which 'takes the figure of the angel as a starting point for an exploration of Blake's ideas about the body and spirit', but they may use the gallery as a place to meet and have a coffee and who knows, curiosity might entice them to look at some of the art.

The key is to create exciting, non-commercial spaces that aren't intimidating and give everyone in the community a sense of ownership. Also, it's vital that these places are built in the heart of the town.

What I love about the De La Warr Pavilion is its accessibility. I took my children there yesterday and after parking the car, we were able to go straight down to the beach, where we explored rock pools and found seashells. A short flight of steps took us up to the Pavilion and as we entered the main foyer, there was no awkwardness about bringing slightly sandy boys into the gallery. Indeed, with its comfortable sofas and art books, it was a home from home.

I wouldn't want to live or die in Bexhill, but thanks to the vision of the people behind the De La Warr Pavillion, I will be a frequent visitor.
Posted by Steerforth at 11:29 pm

"...and, I suspect, also tops the league for teenage pregnancy..."

Why? What have you been up to there?

Yes, the gallery in Walsall's great, and there's also a Victorian arcade which is very pleasant but you have to cross the town to get to it. I went there by bus from Wolverhampton, which compared with Walsall is pretty damn slick, and the entire lower deck was filled with very large, barely dressed pregnant teenage girls, usually with a couple of very large offspring, one toddling and the other attached in some way to its mother. A sobering journey.

Yes, the teenage mums are a depressing sight, particularly as so many of them seem to hate their children. I live next to a council estate and all I ever hear is 'Shu-up!' and 'Come 'ere!'.

In the morning, their children aren't given any breakfast, but are bought Mars bars, which they eat (dropping the wrappers on the ground) as they walk to school.

It's tragic, because the children are nearly always sweet, inquisitive, lively individuals with a real zest for life; then it gets beaten (literally and metaphorically)out of them.

Richard - I've looked up this campaign on the internet but can't find anything, except a small article about concerned fishermen. However, it looks as if the Jerwood's going ahead anyway doesn't it?

on the face of it - the Jerwood is pretty solid, but there is a very loud and ugly local mob who oppose it at any costs, for no really clear reason, and there is always the chance they may decide to pull ut, after all - many shops and houses have large yellow plackards in their windows saying NO, and burning a ceremonial art gallery on the beach during the bonfire festivities was petty unpleasant.

Is that because they associate an art gallery with poncey, metropolitan types who push up the house prices? There's a bit of that going on in Lewes.

Completely off-topic, but how's the Zola project coming along? You're up to "L'Assommoir", aren't you? Or has the enthusiasm been crushed out of you by the duds?

That's right, L'Assommoir is next. I haven't been put off by the duds, but I have been distracted by a lot of good books recently.

I had a look at the Jerwood Gallery thing too when Richard mentioned it. It seems the naysayers are concerned about the loss of a coach park. No, really.

Apropos teenagem mums etc. My wife is a teacher of children with speech and language difficulties, some of whom come from deprived backgrounds. One, who at 5 years old seems to get himself up in the morning and out to school with no assistance from his (voluntarily) bedbound mum, brings in some of the most heartbreaking things for his morning break. Once it was a block of cheese, still in the vacuum pack.

It is indeed stunning Steerforth. Living or retiring by the sea sounds good to me, but preferably somewhere like Brighton where there's a few more things going on, much though I mourn the loss of West Pier & some of the other travesties proposed. I do hope the ghastly proposal for a 'Brighton Eye' is firmly rejected.

I'm really sorry guys, but not all teenage parents are bad. As with all other parents mostly they are just doing the best they can, and with all other parents - sometimes need a bit of support and education. I've met some fantastic young parents, who have far more energy/life and fun than the older boring thirty or fortysomethings.
I'd also add that living in a council estate does not make you horrible by nature, and again, come on, just because people don't always use the middle class vaguely disinterested; 'Oh, really darling' rather than the more honet, 'Shut up' when they really can't take any more it doesn't make them all Bad.

Well said. Actually, I agree with you, even if my earlier comments suggest otherwise. I don't think anyone was generalising about teenage mums and council estates, but focusing on the small, but sizeable minority who, for whatever reason, exist outside the shared moral framework of society.

Maybe I am idealising the middle classes, having grown up in a working class family, but I find it hard to believe that they are as abusive as some of the people I witness on a daily basis.

That shut me up, actually commented because I thought you must be alright really...me, I'm sick of the middle classes, and their bitching in private. In all seriousness, it is the stuff behind closed doors we should all be worrying about, and that isn't class specific at all.