Yesterday I received an email from Amazon which rather threateningly said that Evil has been dispatched. After ten years of loyal custom this seemed poor recompense, then I remembered that my Amazon DVD rental list includes a film called Evil. I can't recall why I ordered it, but I expect there was an If you like...you'll love... recommendation.

Ten years ago I walked past the window of someone's house and saw a bookcase that had no books, but lots of videos. The video library. Like a thief I sneaked closer to take a peak at the titles that they had on their shelf. If it had been Bergman and Tarkovsky I would have assumed that their books must have been somewhere else, but the selection I saw convinced me that the owner's cultural experiences were probably limited to Hollywood blockbusters. I wondered how many times anyone would want to watch Terminator 2, enjoyable as it was. I could never understand the Yours to own adverts, which tried to entice buyers with special features. In the case of Star Trek VIII: First Contact, the special feature was an interview with Alice Krige who plays the Borg queen. Sorry. Alice who?

There are very few films that I'd want to own and I've probably only watched the few that I have once or twice at the most. On the other hand, there are hundreds of movies that I want to watch, so Amazon's DVD rental service is a Godsend. During the last couple of years I've been able to catch up with all of the cheesy blockbusters I've never seen, like Airport, explore the burgeoning world of Korean cinema, see some of the best of contemporary European cinema, veg out in front of trashy horror flicks like The Devil's Rejects and revisit classics like the wonderful The Killing of Sister George.

Just to give you an example, here are ten films I really enjoyed but wouldn't have bought:

and one of the most remarkable movies I've ever seen... 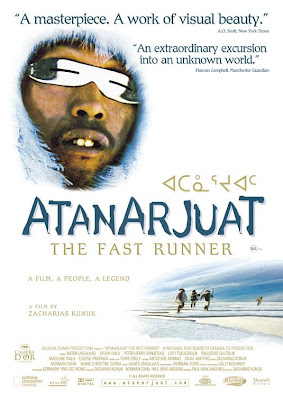 I've read that it's the only film in the Inuit language and it's unlike anything I've ever seen. When you watch Atanarjuat you realise that at its best, cinema is as valid an art form as literature, painting or music. It's sad how so few films even vaguely realise the potential of the medium.
Posted by Steerforth at 7:14 pm