Yesterday I donned my Waterstone's Marines cap and went out in the field to sell books to reluctant readers at a local school. At least that's what I was expecting, but in fact the children were completely different from last week's selection. Nobody shuffled their chairs, everyone was well behaved and after the event, we sold quite a few books. Why were the schools so different? School no.2 wasn't particularly middle-class, but there seemed to be fewer boys with strange haircuts and earrings.

Yesterday' s author was Linda Buckley-Archer, whose tales of 21st century kids accidentally finding themselves in the 18th century not only gripped thousands of young readers but also had my children's bookseller wide-eyed with enthusiasm. Until last week I hadn't done a school event for several years and I'd forgotten how rewarding they were. It's great seeing a hundred children getting genuinely excited about a book. I wish that I could take every old person who complains that children are only interested in television and computer games and show them how wrong they are. 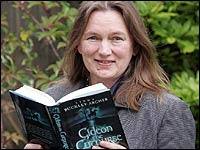 Linda Buckley-Archer was great and handled 120 children as if she'd been doing it for years. Later on I discovered that she had.

After the event we talked about the questions that children ask. No matter which school the author visited, they were remarkably consistent:

After the event, the author signed copies and we handed out free bookmarks. In today's consumer society it was amazing to see how much excitement a simple bookmark generated. What a refreshing change to the increasing number of people who, to quote Oscar Wild, know the price of everything and the value of nothing.
Posted by Steerforth at 7:48 pm

Gonçalo Veiga said...
This comment has been removed by the author.
10:38 pm