Heaven in a wild flower

Sunday was a strange day. I drove up to Teddington to visit my mother and visited the local cemetery, where my grandparents and father are buried. After pulling up some weeds which may have contained atoms of my grandparents, I started walking back and suddenly found myself lying on the ground, feeling like Superman when he's exposed to Kryptonite. After a few minutes I got up and staggered home.

I assumed that I'd had a blood sugar crisis and didn't think anything of it, but my hypochondriac mother is concerned that I've had a minor heart attack. I would have dismissed the idea out of hand, as I'm neither old nor fat, but every time I've picked up the local paper recently it's had a story about a much-loved father of two young children who suddenly collapsed and died of coronary failure. Yikes! The Death Clock may be right after all.

I spent yesterday in bed and on the plus side, read a wonderful novel by Sylvie Germain called Infinite Possibilities. If I'm going to die, this a fine book to finish with. It reminded me a little of George Gissing's semi-autobiographical Private Papers of Henry Ryecroft in that it was all about someone's whose world had been reduced to a microcosm, but they had kept their sanity by imbuing every tiny detail with meaning. Ultimately the novel is a celebration of the human spirit and the infinite possibilities of the imagination. It is no surprise that the author is a philosopher. 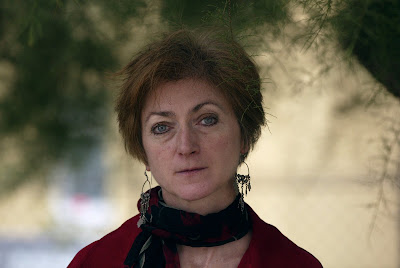 As for my imminent mortality, I am seeing a doctor tomorrow just to put my mind at rest. I cannot die before Friday, as we're launching the new Harry Potter at midnight. There has been a lot of negative comment in the trade press about Bloomsbury and J.K.Rowling and some of it is deserved, but it is impossible to be cynical when you're surrounded by 200 people in silly costumes chanting 'We want Harry! We want Harry!' I know that some booksellers are concerned that Friday is going to be completely out of control, but I think that if we just relax and have enjoy the madness it's going to be a great evening.

I won't be reading the new Harry Potter. After the third book they became far too long and life's too short, particularly in my case. Bugger Hogwarts. From now on it's Sylvie Germain for me.
Posted by Steerforth at 6:22 pm

If you can stand a book written in what sounds a similar vein, you might consider William Soutar's Diary of a Dying Man, which is a kind of two-in-one - author confined to bed and knowing he's on the way out. Unfortunately the Canongate Classics edition seems to be OP.

I agree wholeheartedly about HP.

Gosh, well I'm sorry to hear of your health concern, hope the dr puts your mind at rest tomorrow.

It's my birthday on Saturday and I booked it off as annual leave long before it became Harry date. What a shame!

I hope your health scare turns out to be nothing serious. Have fun at the Harry Potter release. I'll be one of those chanting people at my local bookstore (though not in costume).

Don't die, I enjoy your blog too much.

That's very kind of you, particularly given the fact that my blog has become increasingly crap recently. I seem to have run out of things to say, partly because I feel inhibited by the fact that several people have worked out who I am. The anonymity was liberating.

I know exactly what you mean. I have two blogs on the go. One where I write the stuff thinking about who might be reading it - and therefore tailor it to be acceptable, I become as if they were in the room with me. The other where I don't give any clues about me at all, haven't told anyone that I'm doing it and say what I want to - it's not particularly rude or controversial but it doesn't have a known audience so I'm much freer.

(Of course, there are actually 3, but the third is a complete secret!!)

My all-time favourite blog post was the one with the stars and planets and just how tiny earth is and how BIG Beetlegeuse is in comparison.

Oh. I feel rather glum thinking that perhaps I have contributed to your feelings of restriction despite the fact that I don't "know" you at all.

I have a blog and a livejournal. My LJ is full of blether, and is handy in the fact that one can lock it and therefore make certain entries visible only to friends on an approved list. My blog is more to do with me as a writer and reader and bookseller...and I do censor some of my thoughts since discovering that my real life had somehow found my online self.

This is a very cool blog tho' and I enjoy reading it. I could go away and promise not to look again if that helps?

Hi Sara, I felt that way too, and thought about promising not to come back, but I don't think I'd be able to keep my promise because it's one of my favourite blogs. I could promise never to comment again though!

Sara, Misty et al - your incisive comments are one of the things that keep me blogging. I feel flattered that people not only bother to read what I've written, but come back with pertinent comments that add to my understanding of issues.