Harry Potter and the Deathly Quiet 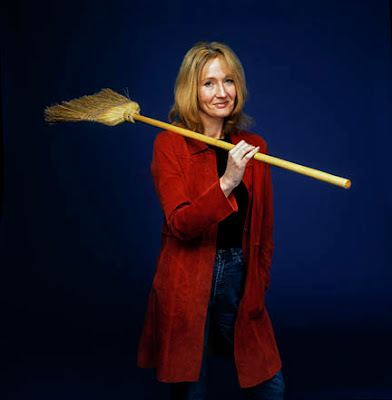 Jo, you don't need to wear Primark jeans now you're richer than the Queen

After yesterday's madness and my frantic eleventh hour drive to Eastbourne, today was disarmingly quiet. I'm not complaining. I've always wondered what a nervous breakdown would be like and another day like yesterday would have provided me with the answer. As things stand, we sold a thousand books, kept our nerve and most of the customers were perfectly happy. I need to keep telling myself that rather than obsessing about the handful of unpleasant people (none of them regular bookshop customers) who decided to make a scene because we'd run out of the children's edition for three hours.

One woman in her 40s said that she felt like crying. I reminded her that we still had the book and whilst she might not like the front cover as much, it was the same story and if she couldn't wait, we'd swap it up for a kids edition in a few days. She wasn't having any of it. Naturally I would have liked to express my complete contempt for her and point out that whilst she was winging about the jacket of a children's book, thousands of people had lost their homes in floods. But I didn't, as I have to maintain a facade of professionalism.

I read the newspaper and searched the internet for tales of Potter madness, but all I could find were unbelievably upbeat statements by bookshop managers who are clearly thinking of their next promotion. You know what I mean: 'It was a great evening and we all got really excited...' rather than 'It was the most stressful day of my life. The whole thing veered dangerously close to disaster and a gang of drunken chavs were shouting abuse at the queue...' I can't stand that cult of positivity in businesses where people feel they always have to be upbeat about everything, otherwise they're not a team player. It invalidates the genuinely positive comments.

I had a crisis of confidence. Perhaps my Potter event was the only one that was tricky. Maybe I hadn't planned it properly and everyone else breezed through the launch, but a few phone calls confirmed that I wasn't alone. One manager, who is possibly the most organised and effective person I have met, said that she felt out of control and cried when her staff weren't looking. The general consensus was that it was the most challenging experience of our careers but the important thing is, we triumphed over adversity and almost everyone got their books.

If I was rich, I'd board my private jet and fly off to my Swiss clinic, but if I had that sort of money I probably wouldn't be working in a bookshop (much as I love it!). Instead I have a choice between watching Dunkirk, with John Mills and David Attenborough, or an episode from Season One of Starsky and Hutch. Maybe I'll watch both.

In the meantime, my internet searches did reveal this amusing posting on the web site of Night Shade Books:

Ann and I went down to the local B&N to witness the Harry Potter madness. The mall parking lot was packed. The kids and adults had destroyed the magazine and children's sections. There was no way we could get a book.

So, instead, we waited outside. A kid came out, probably all of nine years old. A little girl with braces. As per our pre-arranged plan, Ann distracted her with some glitter and a pinwheel. Then I snatched the book out of the girl's hands and ran for it while Ann hightailed it back to the car. The girl was screaming her head off, but luckily, there were so many people around I lost myself in the crowd. Ann then drove round to pick me up. I was hiding where we'd planned for me to.

It all went off without a hitch. Another successful midnight Potter party for us.
Posted by Steerforth at 5:06 pm

That Nightshade extract is hysterical. I didn't see the punchline coming at all. Just what's needed after the hype, sentimentality and quasi-religious adoration. Although being on the outside of it for the first time, I indulged in a bit of all that!

Still, it's over now, one for the social historians to ponder once the dust's settled.

If you ever have any regrets about leaving the book trade when you did, just remind yourself that you missed the weekend from Hell.