Although it's only the beginning of February, I think I can safely say that I've just been to my favourite exhibition of 2013.

I don't know what other people want from art, but I'm happiest when it brushes away the cobwebs and briefly restores that elusive sense of childlike wonder. That's why I enjoyed the Hayward Gallery's Sound and Light exhibition, which is on until April 28th.

The first exhibit is Cyllinder II, by Leo Villareal, which flickers and dazzles with a continually changing pattern. It reminded me of one of those 1960s or 70s sci-fi series where the producers were clearly either pushed for time or had gone over budget: "I know, why don't we just say that the aliens are so advanced, they've evolved into non-corporeal beings? Then we'll only need a few flashing lights." 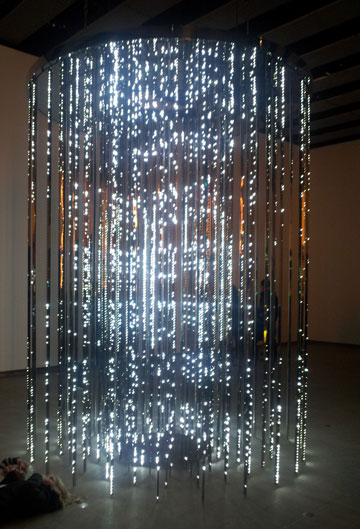 Indeed, there was a very alien quality to this work, as if it had just appeared from nowhere, sent by an higher intelligence as a way of testing our response (which would, of course, be to strip it down and see if the technology could be used for military purposes).

Equally spectacular was Chromosaturation, by Carlos Cruz-Diez which, in the artist's own words, is  "an artificial environment composed of three colour chambers that immerse the visitor in a completeley monochrome situation (where) colour acts with all its force on the spectator's skin, objects and surrounding wall surfaces."

The result is very disorienting, particularly in the area where the three colours meet and create an effect that feels like a fog: 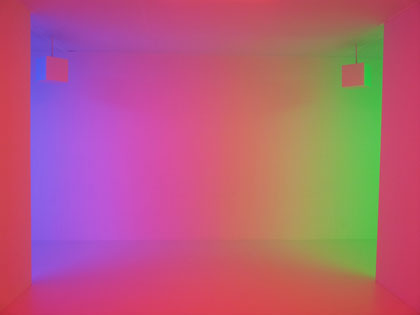 Although the exhibition was packed, this installation was curiously empty. Apart from me, there was just one woman - earnestly studying a pamphlet - and two ageing hipsters: 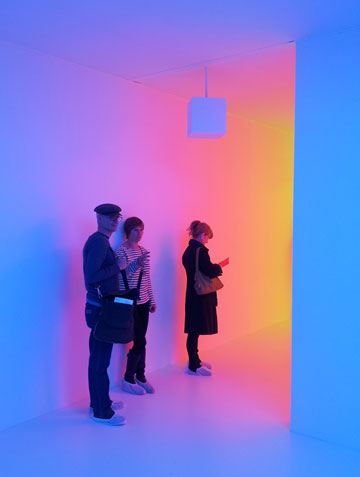 That's what I like about the art world: you can be 49 and still be a 'Young British Artist' - a refreshing contrast to the world of rock and pop, where a pipe and comfy slippers await anyone over 30. 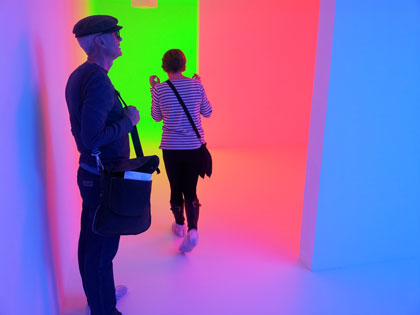 I was still trying to get over the shock of seeing my skin in green light. Green's obviously not my colour: 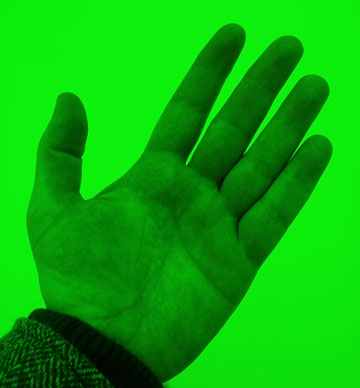 As I left Chromosaturation, I saw a long queue and naively assumed that it must be worth joining. 20 minutes of utter tedium followed, only slightly relieved by the unsuccessful attempts of a girl (who looked uncannily like Velma from Scooby Doo) to push in front of me. However, the boredom of queueing was nothing compared to the spectacular dullness of the artwork itself.

I looked at my watch. I was due to go to a concert at the Purcell Room in half an hour and needed to get a move on. If only I hadn't wasted 20 minutes with Velma.

Luckily I had enough time to see a spectacular installation which consisted of a strobe light and miniature fountains of running water. The effect was breathtaking, creating unique, beautiful sculptures of water that only existed for a mere fragment of a second. Some looked like a row of diamonds, others had the appearance of glass. There was something poignant about the way these beautiful objects were gone before we could begin to savour them. A bit like being young.

I rushed through the remaining exhibits, reluctantly missing what looked like a very impressive piece by Iván Navarro, which did something clever with mirrors. I shall have to go back.

Outside it was nearly dark. London is not a beautiful city, but I almost like it at twilight: 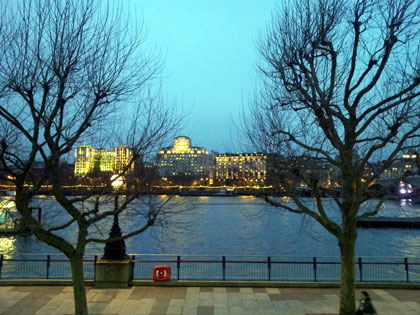 Conveniently, the concert was next door. I'd gone to support a friend who was performing in a choir, but would have happily gone anyway, as the programme contained this beautiful folk song arrangement by Vaughan Williams:


I really enjoyed the concert. The music was well-chosen and the standard of singing was exceptional compared to the quivering, geriatric voices of most choral societies. I'd forgotten how beautiful the human voice was.

On the journey home I found an empty seat and got out my history of MI6 - I've become slightly obsessed with the SIS during the last couple of months, particularly its activities during the Cold War era. As I started reading the train halted and I absent-mindedly looked out of the window. Spookily, right in front of me was the SIS Building, with its satellite dishes pointing towards the four corners of the globe.

I had to change trains at Clapham Junction. I was hungry and looked for something to eat, but although there were plenty of outlets, they all seemed to sell the same food. If you don't like croissants with ham and cheese, cholesterol-raising pasties or diabetes-inducing pastries, you're buggered. I went without.

The train to Lewes was blissfully empty, but this didn't stop a young woman sitting next to me and getting out her knitting. I quickly discovered how hard it was to concentrate on reading with a knitting needle popping into your line of vision.

I will add knitting on trains to the very long list of things I intend to ban when I become Prime Minister in 2027.
Posted by Steerforth at 5:08 pm

Well this sounds an excellent contrast to the damp-barn-in-field scenario. Fabulous lighting.

Always Rayfe Rog - that was what he called himself. I could bore for England on the subject of Vaughan Williams, but I've learned that nothing kills a blog faster than a post about classical music.

"the world of rock and pop, where a pipe and comfy slippers await anyone over 30."
Could you drop a hint to the Rolling Stones, Bowie, Boom Town Rats...
I'm not going to listen to them, but it's bad enough hearing about them.

Well, as I've written before, what's the most dreaded phrase any rock legend can utter?

"Here's a song from the new album".

What do I want from art work? My life is so full of sound and fury and strife that what I primarily look for in a painting is a sense of serenity. Nothing dark, or sinister, or new age. Constable springs to mind, which I know clasifies me as an old Fuddy Duddy. (Of course in years past, I was a young Fud too...so I guess nothing has changed.)

Music? I like most types of music, in small doses. But what I really like is the sound of silence. (See above) Which is why I never play CD's in the car while I'm driving. Sometimes that's the only quiet place (or space) I get in the course of a day ...

Sad, really, but the quiet works for me. :o)

Carol - Music gives me serenity, so when it comes to art, I look for mystery or fun. But if I'm looking at a pre-1900 painting, there's also the pleasure of having a window into a past world.

Silence is very important. At the moment I have rather too much of it (interspersed with neighing horses and mooing cows) and it's a pity I can't bottle some of it up and send it to the people who are starved of it.

Great review of LIGHT SHOW - I'm going on Thursday. Curious about the 20 minute wait - was this James Turrell? I have been blown away by his things in the past but some can indeed be "meh" - can you describe it?

Bye the way - I'm a friend of Laura / Oliver's, in case you were wondering -she mentioned your post this evening.

Beautiful! Such a Vaughan-Williams moment at 1.35. Lovely arrangement.

Dan - Yes, it was James Turrell. Perhaps I didn't stay long enough - I gave it five rather than the recommended 15 minutes - but I was in a hurry and didn't want to sacrifice the rest of the show for an exhibit that didn't seem to be doing very much at all.

Perhaps this installation works best in isolation, where it isn't in competition with more 'accessible' exhibits.

Richmonde - I'm glad you like it. Some of VW's folk song arrangements are a bit tum-ti-tum, but there are others that bring a tear to eye, like 'Bushes and Briars'.

Oh dear I am a knitter and do so on trains, I better make sure I do not when I am on a train in your area ( no it was not me!)

You know, I've often thought that you should write a book or three, but maybe a blog is the best venue for someone like you, or actually, for me, as your reader. With a blog, I get your almost daily impressions of life in England, and your photography and other assorted media. It's pure pleasure. I've said it before, but thank you!

Thanks Donna. I'm flattered that you think I should write a book, but I completely agree that a blog is the best outlet for this sort of writing. In the past, people who enjoyed writing often felt that they had to write a book, even if it meant resorting to vanity publishing. As a bookseller, I had some tricky conversations with 'local authors' who thought that the mere act of producing a book gave them equal status with all of the 'proper' writers. Blogging offers an alternative outlet that may actually gain more readers than a book ever would.

I also like the multi-media aspect of blogging - being able to share photos and film clips is a real boon.

Forgive my long answer, but it's something I've often thought about. Of course, if I had an idea for a book, I hope I'd go ahead and write it, but so far the muse has eluded me!

Sustainable Mum - I don't think those narrow seats lend themselves to many activities. Perhaps they could have carriages for different types of passengers: self-important businessmen talking loudly on their phones, over-excited teenage girls, knitters and laptop users, young men who like to 'share' their music with others, readers like me, parents with screaming children and finally people with very large suitcases that get in everyone's way. It would work.

I always knit on the train. But I tend to use circular needles, so they don't do that flashing thing. And do you really not think London is beautiful?

No Ms Baroque, I do not. Vienna, Prague, Seville, Venice and Stockholm are beautiful, but London is not. I was there today, musing on its lack of beauty. London is more interesting than any other city I can think of, but there are only small pockets of beauty. It has been ruined by the Luftwaffe and the postwar town planners.