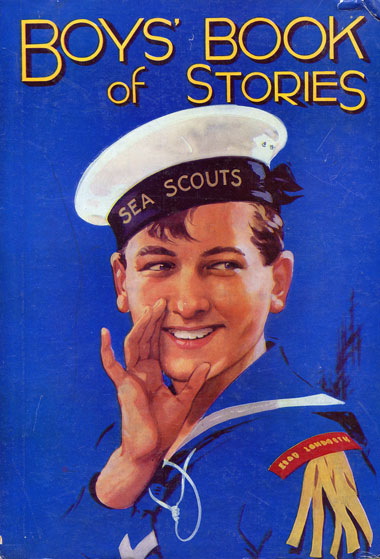 Another day spent consigning worthless books to oblivion. I'm probably destroying more books than Hitler, but at least I'm not burning them. I did try when I bought my woodburning stove, last year, but they make a terrible mess. What a shame - it could have really cut the heating bills.

Today I had to throw away a box of annuals, but I kept some of the illustrations so that they could be scanned and float aound in Google Images for posterity.  I used to innocently give the jpegs names like 'schoolgirls01', but discovered that I was attracting the wrong sort of traffic.

Here are some of my favourites: 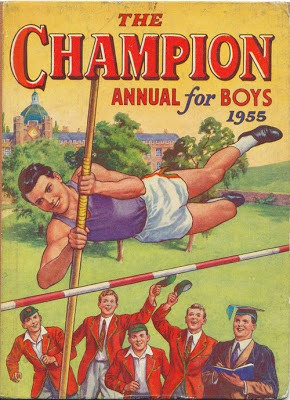 Carstairs Minor set the school record in June 1916, shortly before he went off to the trenches. Little do they know that Blenkinsop has been trying a new drug called a 'steroid' that his Uncle Dick bought back from a business trip in America.

The wholesome, outdoor theme continues, although the boy in the front appears to be in the grip of a psychotic episode. His companion looks slightly nervous: 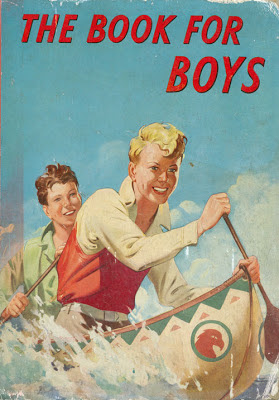 But not all of the characters were good eggs: 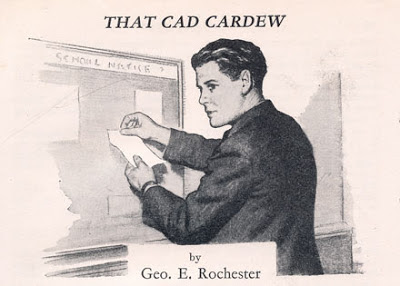 That Cad Cardew is playing merry hell with the school notice board. Who knows what chaos will ensue?

This is one of several short stories, with titles like:

THE MYSTERY OF BAD LUCK ISLAND

GINGER NUTT - THE BOY WHO TAKES THE BISCUIT

BUSTER O'BRIEN AND THE VANISHING POLE-VAULTER

I wonder how many boys actually read these short stories? I can't imagine ever making the effort - I always preferred comic strips - but perhaps children were more receptive in the pre-television age.

It's either that, or simply that the grown-ups refused to pander to the tastes of their young readers. I suspect the latter, as I can't imagine that a lengthy article on iron smelting would have ever been that interesting to an eleven-year-old boy.

On the other hand, I can imagine being captivated by pictures like these: 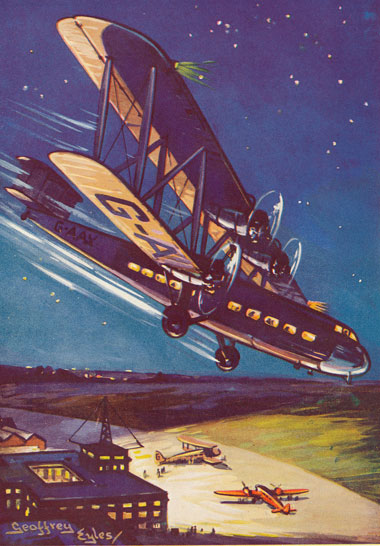 This illustration of the night-mail arriving from some far-flung corner of the globe evokes an exciting world of romance and adventure - a stark contrast to the average boy's drab existence of school, church on Sundays and visiting relations. The illusion is slightly shattered by the fact that the plane's arriving at Croydon aerodrome, but never mind.

(On a serious note, this picture reminds me of one of my favourite books, which I'd strongly recommend to anyone who hasn't read it: Wind, Sand and Stars, by Antoine de Saint-Exupéry) 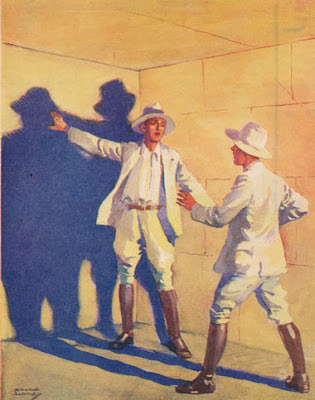 But perhaps the ultimate schoolboy hero was the fighter pilot: 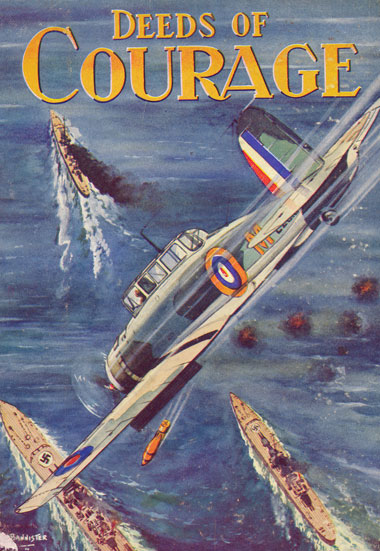 A few years ago, I met an old man who did exactly this - he even had the photos to prove it. He said that firing the bombs was relatively easy, but taking decent pictures of the explosions was a nightmare.

I also found some girls annuals, which weren't quite as exciting as these ones that I found a couple of months ago . This girl doesn't look as if she'd be terribly keen on a game of lacrosse: 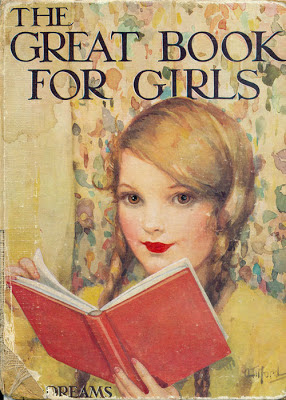 As for these young flappers, they seem to be having a rather wild party: 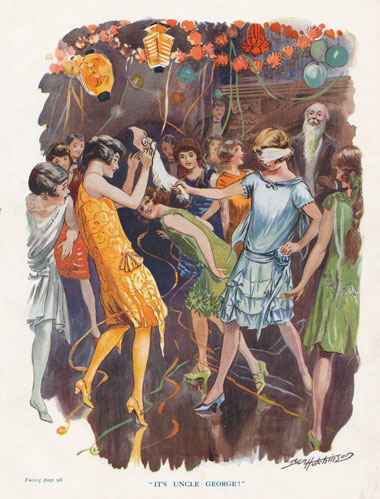 Thank goodness the object's a fake beard. The game could have been very embarrassing for 'Uncle' George, who is looking nervously on in the background.

The next picture neatly sums up everything that has gone wrong with British society since the Lady Chatterley trial: 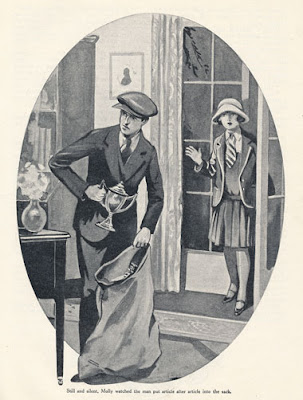 See what I mean? In those days even the burglars wore ties. People had standards.

By 1968, when the next annual was published, it was all going to pot - metaphorically and literally. The only girls left in the Guides movement were those who hadn't succumbed to the allure of youth culture. Here they are in a field, somewhere in England on an overcast day, studying for their cooking and washing-up badges: 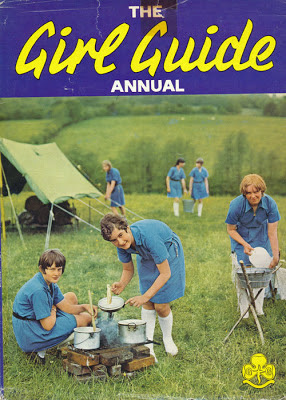 The girl in the centre - I'll call her Ginny - seems to be enjoying herself, but the other two girls look as if they'd rather be listening to the Rolling Stones, with some boys. Luckily, Ginny doesn't seem to have noticed: 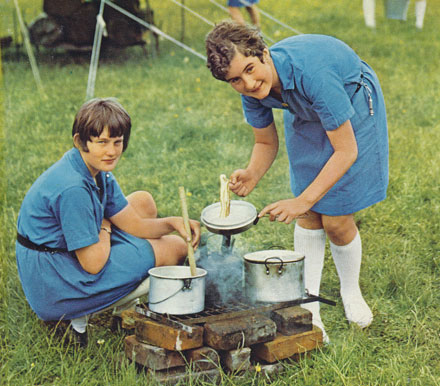 Those white socks seem a little impractical for a muddy field, but I suppose they make the girls easier to spot in the dark.

Looking at these annuals, I feel both a sense of nostalgia for what seems like a more innocent age and, mostly, a huge relief that I don't have to live in it.
Posted by Steerforth at 5:57 pm

Thanks so much for making clear what this "It's Uncle George" picture really is about. So much has been lost form the knowledge of this forgotten era. I assume that what the vehement gentleman in white says to the other is "I say, Hopkinson, if you insist on having these shadows painted red, it will be over my dead body! Shadows ought to be blue!" or something akin.

I think you have got it the wrong way round -- things like the night mail made Croydon Airport very romantic. When I visited they had amazing photos, and I think a temporary display of Amy Johnson's plane. Here is the best link I could find: http://www.croydononline.org/history/places/airports.asp

Tororo - I loved your comment. To use an old-fashioned word, it made me chortle.

Anon - Thanks for the link. I know it's fashionable to knock Croydon and it was probably a nice place in the days of the aerodrome.

Our burglar may be wearing a tie but he should know to remove his cap indoors.

Brian - You're quite right, but there are mitigating circumstances: no self-respecting criminal would risk leaving an incriminating cap at a crime scene (also, he thought he was alone).

We will never know whether he automatically removed his cap when the young lady entered through the French windows.

In the 1970s I lived just half a mile away from Croydon aerodrome - separated from it by playing fields and the buzz of traffic from the 'Purley Way' (A23). Now it is one huge industrial estate and out of town shopping experience along that stretch - but the playing fields persist - Hurrah!

I joined the Girl Guides a couple of years after that annual, but I remember the best bit of camp for me was lashing together washing up stands and tripods out of bamboo and twigs - the worst bit was when it was your turn to empty the lat!

Ah, the Purley Way - a soul-sapping stretch of road. I only go there if I'm visiting Ikea (another thing I avoid doing). But I went to a 'do' in Purley a few years ago and it seemed a rather nice place.

There must be collectors out there! Couldn't you frame the best illustrations? You could be destroying rare early Harris Tweed episodes!

Dear Steerforth - please list these on your site instead of junking them. I'll have the Great Book for Girls if it's not too late. And if you find any Gladys Peto annuals they're worth real money.

You wonder if anybody read this stuff. Well, I did. When i was 8 or so my father retrieved from his cousin a large box of books he'd had when he was a kid in the 20s. There were lots of William books, but there were also books by the likes of Talbot Baines Reed and Percy Westerman, who wrote loads of stories for these annuals. I hoovered them all up, and the same sort of stuff was still being churned out in the 50s. My head was full of cads and bounders, not to mention sinister Levantines.

I'm surprised you can't shift them. I tend to buy anything that has an aviation-related cover (you might want to note), especially if it features a dashing young buck of a pilot who appears to be wearing lipstick...

I say, I may have missed some of the column, because I was laughing so hard at the title, "Ginger Nutt takes the biscuit".

Did love the picture of the burglar wearing collar and tie, though. Question: Was it his school tie? Was he learning something besides Latin and maths at his school? Hmm...perhaps there's a story in there.

I have a book of similar vintage, containing equally yawn-producing stories...it was a school prize won by my father when he was about eight. Fun to look at occasionally, though I can't imagine any self-respecting eight-year-old reading it today.

Richmonde - I've tried selling the illustrations, with disappointing results. I probably need to put some more work into it, finding the right outlet.

Sadly the Great Book for Girls is now in the skip, but I'd happily send you something similar if it turns up (naturally I wouldn't charge anything, as they're only going to be thrown away). Email me if you're interested.

Mike - Well, they didn't do you any harm! Would your literary career have started if you hadn't devoured stories like these when young? My father loved Percy F Westerman and kept saying how wonderful he was, so one day I tracked down a copy in an Edinburgh bookshop. He was pleased, but I'm not sure if he realised just how much effort I'd gone to.

Pilots with lipstick is a very specialist genre, but as with Richmonde, any requests and I'd be more than happy to send something.

Carol - You think those stories are boring? Wait until you see the 1885 Boy's Own paper I have (I'll probably write a post on this at some point). There are lengthy articles on the histories of various public schools, blow-by-blow accounts of how things are made, written at a level that would fox most 18-year-olds, plus some short stories that have a wider vocabulary than most adults possess today. The Victorians clearly expected a lot more of children than we do today. But I wonder what the literacy levels of the ordinary, working class children were.

Please tell me you're not going to junk the 1885 magazine. I really think you're far too modest in not including on your blog a suitably restrained link to your outlets.

Your captchas as getting far too hard, esp. as most of the pics of house numbers lack resolution. I had to go through 5 (and seem to have lost a comment in the process) before finding one worth attempting.

Flavia - I didn't know that it was that difficult. I reinstated the captcha facility because I was getting deluged with spam, but I don't want to lose comments from real people, as I always enjoy reading them.

As far as linking to my bookselling activities goes, I just can't do it. I don't like to mix business with pleasure ;)

I have a small stack of "Boy's Own" papers that I bought, very cheap, at some store whose name I have forgotten. I love them for the illustrations, but I've never read more than a few brief passages.

I expect these books were all widely read, even the long articles on smelting. I still have students, largely boys, who will spend lots of time with what are essentailly manuals. They tend to be manuals about technologies much more advanced than smelting, but even smelting was once cutting edge technology.