This morning I felt as if I was in an M.R. James story: alone on a misty country lane, listening to the sound of horses hooves that seemed to approach, but never arrived. I don't believe in ghosts, but fog has a curious ability to induce feelings of paranoia. When the visible world is reduced to a radius of 20 yards, the sounds that come from beyond its limits can seem vaguely threatening.

I don't think that working on my own suits me. I'd always thought it would, but I spent this morning alone in my cowshed, picking the book orders for tomorrow's collection and found myself going over past injustices, broken friendships and unresolved conflicts. I've no idea why.

David Sylvian wrote a very good song about it.

Yesterday was more my cup of tea, with a return visit to the wonderful Light Show at the Hayward Gallery: 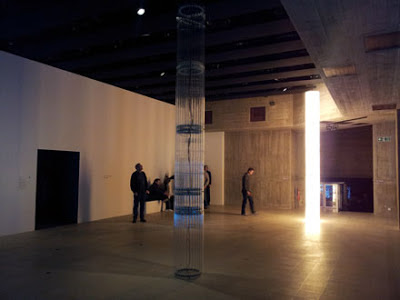 I was there two weeks ago and was so impressed, I decided to buy tickets for my wife and youngest son. Taking a seven-year-old to an art gallery is always a gamble, but I thought that the Light Show would be a safe bet and I was right. My son loved it.

We should have quit while we were ahead, but my wife had heard that there was a free performance of Poulenc's Story of Babar the Elephant, next door, in the Royal Festival Hall: 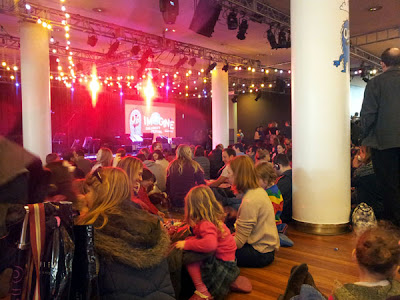 Poulenc's sub-Stravinskian score lacks the big tunes that make Peter and the Wolf so successful, but the players and two narrators performed with gusto. Sadly, they were no competition for several hundred under-fives with a short attention span and we struggled to hear the music above the din of screaming children and mothers shouting "Lily! Please stop hitting the man."

As I was the man that Lily was hitting, I was quite keen to leave.

We walked back to Waterloo Station via the South Bank. Even in February, the area was packed with street entertainers and the queue for the London Eye seemed longer than ever. In an archway, a man was lying on the ground singing "I...woz...bawwnnnnn...in... Lahhhhhdan...tahhhhhn..." and I realised that his was the first genuine London accent I'd heard all day. It would be rather poignant if the only real Londoner I saw was a homeless man. 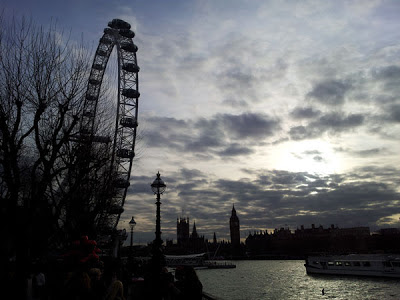 The journey home took longer than usual, as someone had decided to throw themselves on the railway line at Shoreham. Instead of the usual euphemistic descriptions of a 'passenger action' or 'incident', we were baldly told that someone had "committed suicide at Shoreham". My son looked horrified.

On the way home, both my wife and I agreed that being in London was invigorating. We had got into a rut since our oldest son became ill, last year, avoiding any journeys outside Lewes because our absence exacerbated his anxiety.

It had seemed liked the right thing at the time. However, when I found myself working in a remote cowshed, surrounding by hostile dogs and limbless humans, I knew that I'd only stay sane if I had a little more fun at the weekends.

When the landscape looks like this and the first thing I see on leaving work is a sheep's carcass that looks as if it's been stripped by zombies, it's time to buy a ticket to London Victoria. 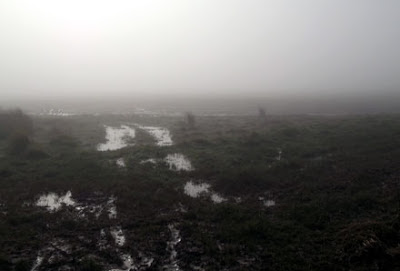 Fortunately, I won't be working alone for much longer. The two postgraduates who worked with me last year will be back next week, so I won't be as susceptible to to the ghosts.

I'll end as I began, with M.R. James. Do you believe in ghosts?

Posted by Steerforth at 6:52 pm

Did you see the food market on the piazza? It's there every Friday, Saturday and Sunday. I used to go a lot when I was that way. There are also different special markets throughout the year. Worth a visit if you are there.

Yes, I was there, but wasn't able to linger as my son regarded the whole thing as a plot by parents to get their children to eat horrible food.

Yes, I do believe in ghosts. When Rob and I got married, we went to Victoria, BC, on our honeymoon. The last night we were in Victoria, I couldn't settle down. I paced ... I felt terribly apprehensive ... I felt -- well, there's no other word for it, spooked.

When we returned home the next day, we learned that aunt's husband had committed suicide the night before. I had the distinctly creepy feeling, that because I'd just gotten married, he may have been thinking of me in his final hours.

It took me a long time to shed the feeling ...

"the sound of horses hooves that seemed to approach, but never arrived."
Sounds like Kipling's 'The Way through the Woods'.
What did you do to annoy Lily- apart from existing?

Beware! In any secluded place, freshly imported post-graduates invariably attract the local zombie pack's attention (possibly do they contain more proteines than average humans? also they are reputedly easier to catch than any ovine)...
Pardon this early monday morning joke. This was a great atmospheric post, and the pictures did much for this.

Carol - I was going to make a honeymoon joke, then I read the next sentence. What a horrible shock and a very unpleasant thing to happen during an otherwise happy time.

Although I don't believe in ghosts, it is striking how many people have had experiences like yours.

Anonymous - I'll have to read the whole poem. Thanks for the quote. I don't think that darling little Lily was annoyed with me. She smiled very sweetly as she elbowed me in the back for the umpteenth time.

Tororo - I know that zombies particularly like eating brains, so perhaps the postgrads will draw them here. Luckily, I have a hidden door that I can quickly sneak out of.

That Michael Hordern clip in 'Whistle and I'll Come to You' reminds me that when it was first broadcast we found it one of the scariest things ever. Years later the VHS version became available and we bought that, along with 'The Stone Tapes'. On second viewing neither was as bad as we'd remembered. Now, whether this says more about our faulty memories or about us becoming more immune over time, I have no idea.

this just surfaced on MeFi, seems sorta up your alley...

I do believe in ghosts. At least, I wouldn't be surprised to have an experience of one. But then I believe in God and Satan and angels, too.

Speaking of ghosts, I like to recommend Deborah Grabien's "Haunted Ballads" novels. If you like ghost stories and English folk-rock, you will enjoy them.

That is a fine and haunting picture of the London skyline. Thanks.

Little Nell - I watched 'Whistle' again last Christmas and thought it was superb, but 'The Stone Tapes' left me cold though - the character who kept saying "Damn it Tom!" made me feel as if I was watching an episdode of 'The Brothers'.

Mike - Funnily enough, someone emailed a link to the site only yesterday. It certainly is right up my street - one of the best things I've seen for a long time. Thanks.

Brett - Thanks for the recommendation. I must admit I'd never heard of her, but I've now looked up the Wikipedia entry and know a little more. It's interesting how she used her illness in such a positive way.

I teach a Fantasy and Sci Fi class in a high school. I have been trying to get my students to like "Oh Whistle..." by James for five years. Alas. Not enough explosions or heads spinning on necks for them to be frightened by, I suppose. (I even suggested they read it slowly and very late at night. It didn't work and four of them earnestly tried it -- one even set his alarm to awaken at 3 AM to read it. It did not work, says he.)

Chris - That's a pity - I would have thought that James' brand of psychological horror would appeal to teenage angst. But I can understand that if they approached it as 'horror', they'd feel short-changed.

Perhaps they need to be in a remote, old building in East Anglia, where the wind howls and the beams creak.