Far From the Madding Crowd

Some years ago I was given the opportunity to open a new bookshop in the Science Museum. I knew very little about science, but managed to bluff my way through it and the shop seemed to do very well. There were a few little niggles, like the time I wasn't allowed in the stock room because the area was being decontaminated for radiation; but on the whole I enjoyed myself.

I even liked my commute to South Kensington on the District Line, which was a refreshing change from crawling along the M25 at rush hour. I could tell that my fellow passengers were irritated by the wailing Gypsy beggars who occasionally appeared, or the young South African men who used to leap into the carriage with a guitar and shout "Hi guys...Today, is gonna be the day when they're gonna give it back to you...", but I wasn't bothered. It still beat looking at a sign saying QUEUE AT JCT 8.

However, there was one aspect of the Science Museum that started to really get to me: the lack of daylight.

After spending hours in an air conditioned, windowless hall, I became increasingly disorientated. Was it light or dark outside? What was the weather like? Which season were we in? At first I just found it strange, then I began to sense a creeping depression. What could I do to shake myself out of it?

I don't know how the idea came to me, but one day I decided to walk the South Downs Way on my days off. Not all at once - it's 100 miles long - but in 10 to 25-mile sections, depending on where the nearest railway station was. I began in Winchester and, over the course of five months, walked to Eastbourne.

It was a wonderful experience in so many ways and, as I walked along the Downs above a town called Lewes, I remember thinking how lucky the locals were to have this countryside on their doorstep. If I lived here, I'd be up on the Downs every weekend.

Two years later I was living in Lewes, but was I up on the Downs every weekend? Of course not. Instead I was going up to London, making the most of my Tate Gallery membership, or seeing friends for drinks.

However, one of my resolutions for 2013 is to take more long walks, so this afternoon I took a train to Glynde and walked back to Lewes along the Downs. This may not be the most spectacular countryside in the world, but it works in mysterious ways. I didn't meet a single soul for the entire walk and the isolation was liberating: 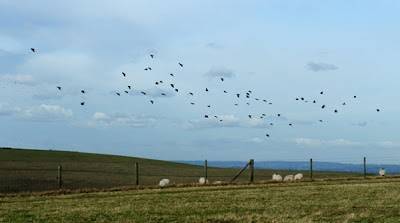 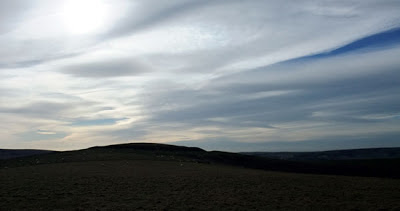 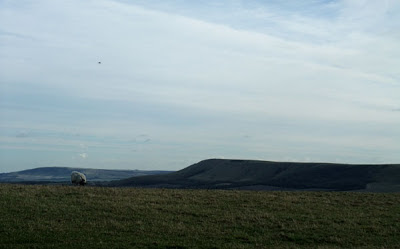 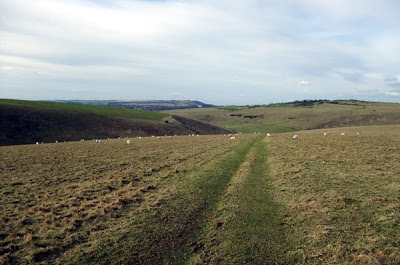 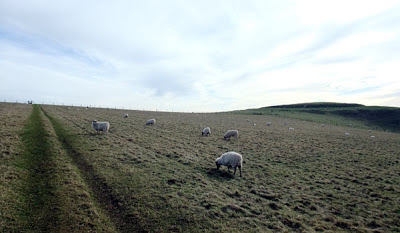 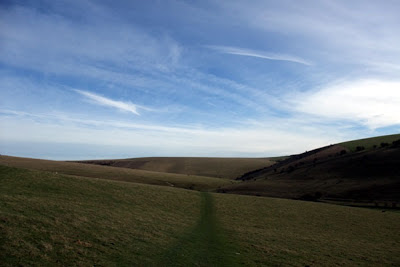 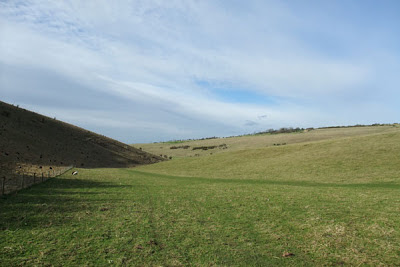 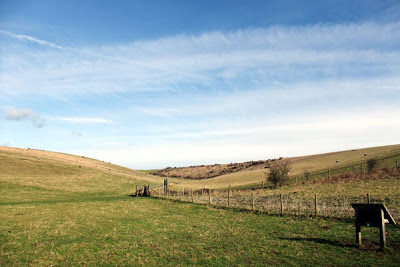 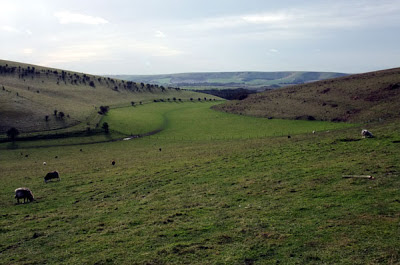 The first part of the walk was awful: a steep climb from Glynde village that made me realise how out of condition I was. At one point I imagined that there was a pain in my chest and I started to think of the various news reports about men of my age - outwardly healthy - who suddenly keel over and die from a heart attack. Who would find me here?

But then I reminded myself that the first part of any walk on the South Downs began like this, as the muscles demanded extra oxygen and body took a while to adjust. I wasn't dying.

At the top of the Downs, the wind was unforgiving and my cheeks felt scoured by the cold. No wonder it had taken the snow so long to melt on the hills. But it's a continental climate here. In the summer, it can be oppressively hot, with no trees to provide any shade.

The physical exertion gradually induced a sense of deep relaxation that was compounded by the silence and isolation. It would probably be trite to say that the journey was mental as well as physical, but the bleakness and emptiness of my surroundings had a profound effect.

Eventually, Lewes appeared in the distance, like Bunyan's Celestial City: 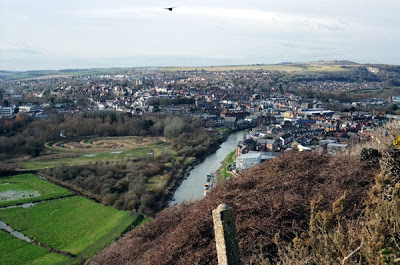 The path took a turn a made a steep descent. As I walked down, I saw a group of geriatric hikers slowly advancing up the hill and felt both admiration and hope. Someone once suggested that I join a walking group, but I told them that they'd missed the point. It was the isolation that attracted me.

However, I suppose there's safety in numbers when you're over a certain age.

Entering a world of noise, people and things felt strange. Here were thousands of people, all neatly contained in this space of narrow streets and cramped little houses, while less than a mile away, there was a vast, empty wilderness.

I shall be returning to Glynde at the earliest opportunity.
Posted by Steerforth at 6:18 pm

Thanks for all the empty wilderness, be sure it's appreciated!

Your penultimate pic is particularly pleasing with its lovely rounded hills and sinuous curves. The last pic looks like you are on final approach coming into land. My brother has just finished doing the whole South Downs Way in daily chunks to and from bus stops and railway stations and loved it.

Rog - Your comment reminds me of Kenny Everett's 'Marcel Wave' saying "Ze Downs...eet is like a woman..."

I'm glad your brother liked the Downs. It's extraordinary just how off the beaten track they are, given the population density of SE England.

I once lay down on the Downs and had birds swooping low over the rise from behind me. They didn't realise I was there so skimmed right over me just inches away. Our favourite walk always started at the un-signposted Seaford car park and went to Hope Gap and Cuckmere Haven. We hardly ever met a soul.

I agree Steerforth, and have resisted joining a walking group myself. It's hard to connect with the surroundings when people are chattering.

Great post. Makes me want to strap my boots on.

Wonderful post. The first bookstore I ever worked in was located in a windowless basement. (Well, there was a skylight, which one could gaze up into, longingly.) I spent nearly seven years there and experienced what you describe. Never again. Now I live on a hillside with a long view out to the horizon. I can't get enough of it.

Love your photos of the Downs. I want to see them in person someday.

Ahhh, thankyouthankyou :) Absolutely lovely. I need to do this.

Lucille - I'll have to try that. I tried a beach next to the eastern side of Seaford Head and it was beautiful (and very empty). It's so silly that I haven't explored more, but it wasn't easy during the pushchair years and I felt guilty going off on my own.

Martin - It's impossible. I love going on a long walk with a friend, but the thought of having to make polite chit-chat with strangers fills me with horror. But if I was single and new to the area, I suppose that it would be a good way of getting to meet 'nice' people.

Sam - You must be near a lot of good walks, although the famous East Anglian wind scares off people like me.

Sarah - I've just visited your blog, which I shall be returning to. I hope you're not snowed-in at the moment!

I'm glad that you've managed to swap the windowless bookstore for Maine - a place that I'd love to visit (if I ever go a plane again!).

Katy - You're always welcome to join me. I can recommend the Downs for clearing away the cobwebs.

You've reminded me of how much I miss Kenny Everett.

Fortunately there's some shreds of his performances on YouTube.

Who compares with him today?

Or you can do what my husband does, recce the walk on your own first to appreciate the solitude, then show it off to friends and get as much pleasure from that.

Dale - I liked Kenny Everett, but when I saw one of his shows a few months ago, I was shocked at how bad it was. In fairness, he didn't write the scripts.

Nell - That's a good idea. I do like a good walk with an old friend - I don't do it enough. I suppose as more of my peers' livers pack up, it might be a good alternative to the pub.

Yes the Downs are nice. The reason why they sit so close to dense urban areas is topography: the coastline is long and thin and the Downs rise up quite suddenly, too hilly to build on. So far, anyway.

A lovely account. I too can't abide working in places with no natural light.

Steerforth - I've walked sections of the North Downs way and similarly enjoyed it. There's a particularly glorious point on Leith Hill where - on a clear day - you can see the English Channel through the Shoreham Gap, with Lancing College twinkling in the sunlight. It never fails to make my heart sing.

James - I hope we never reach the stage where anyone contemplates building on the Downs. If they do, then all hope is lost.

Laura - Natural light should be a human right. There, I've just given you two lines for your next poem. See you on Thursday at the Lewes Arms.

Huw - Yes, I love Leith Hill and all of that area near Dorking - Newlands Corner, Gomshall etc. When I grew up in Teddington, it was quite easy to get out into the Surrey countryside and visit parts of the North Downs. I'd love to do the whole route.

To point out the obvious, isn't it funny that you have to climb up to the Downs. Only in English...

Well, it's a matter of perspective and history. Go back a couple of thousand years and the lowlands were covered in thick forests, so the best way to move around was to travel along the hilltops. When you're on the top of the world, the slopes are the 'downs'.

I love the fact that I'm treading the same footsteps as Roman centurions and prehistoric ancestors.

Well, it's a matter of perspective and history. Go back a couple of thousand years and the lowlands were covered in thick forests, so the best way to move around was to travel along the hilltops. When you're on the top of the world, the slopes are the 'downs'.

I love the fact that I'm treading the same footsteps as Roman centurions and prehistoric ancestors.