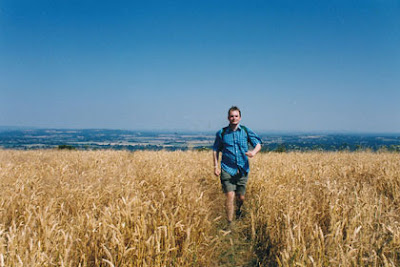 A few posts ago, I mentioned the fact that I once walked the 100-mile South Downs Way, from Winchester to Eastbourne. Today I found some photos of the walk, taken back in the Age of Kodak. I don't think they're wonderful pictures, but they do serve as a reminder that even in one of the most densely-populated parts of Europe, there are still plenty of empty spaces.

A large part of the route follows prehistoric tracks and if I wanted to give a truly accurate impression of the journey, I'd probably post a succession of photos showing paths going up and down hills.

But it's what you see on the way that makes the journey worth making: a Saxon church, a stately home, a slow worm, a disused railway line, a memorial to a Luftwaffe pilot whose plane crashed nearby, a field of poppies, a Roman road, a dragonfly hunting for prey, a dew pond, an Iron Age hill fort, a pair of windmills and a weasel.

The South Downs Way begins in a dreary field, just on the outskirts of Winchester. It ends by the sea, in the spectacular setting of Beachy Head - the highest point on the south coast of England.

I have resisted the temptation to 'improve' these 35mm film pictures with any Photoshop trickery. As much as I like digital photography, there's something magical about Kodakcolor: 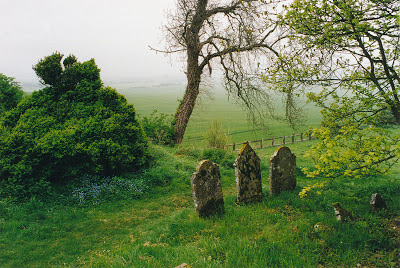 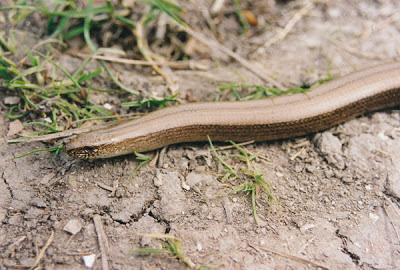 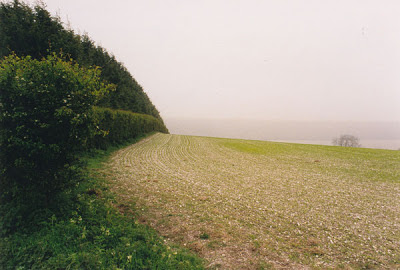 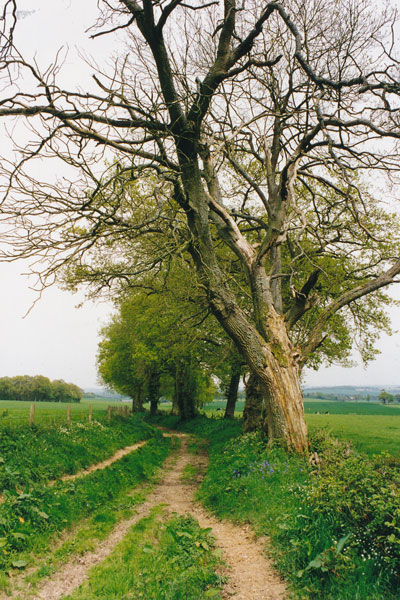 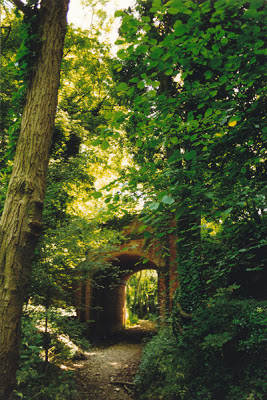 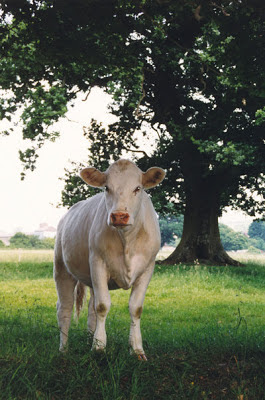 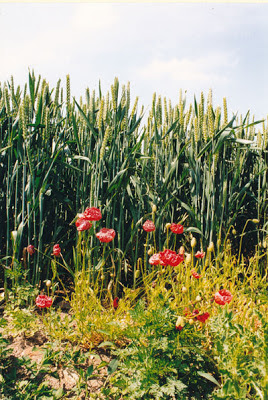 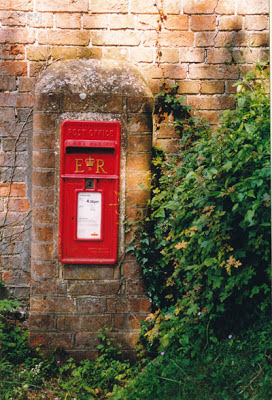 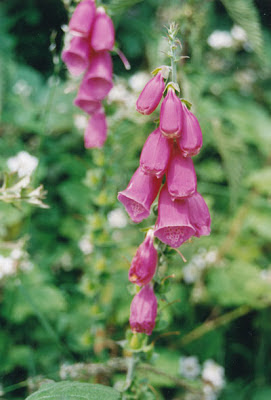 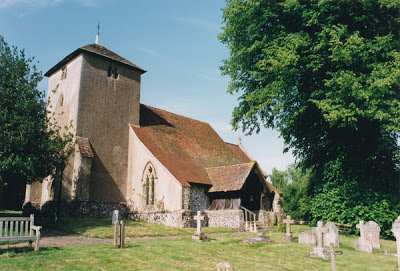 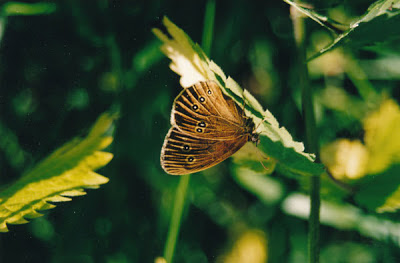 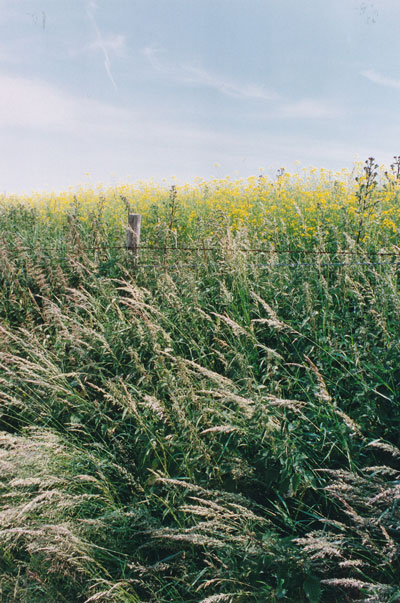 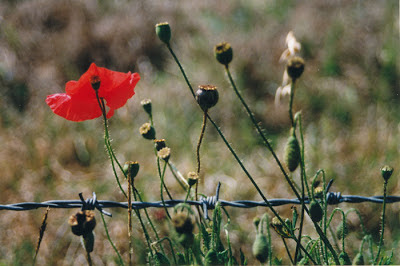 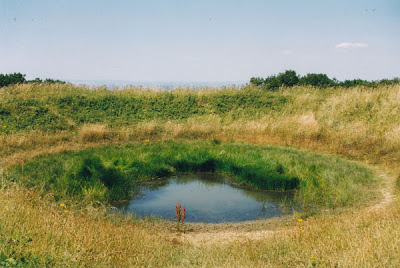 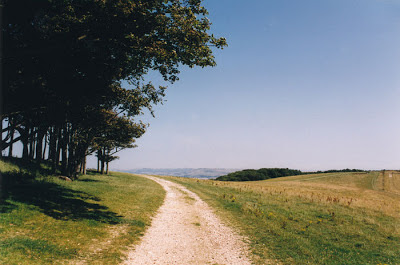 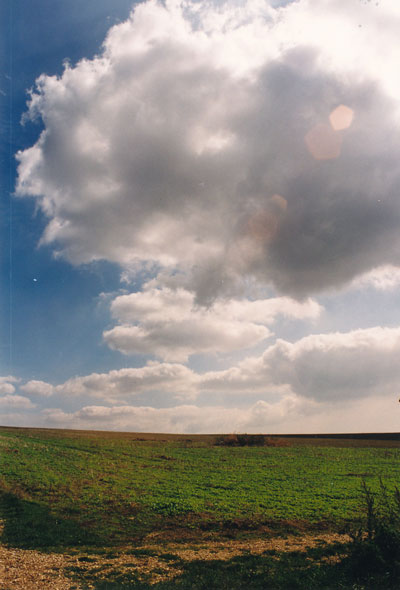 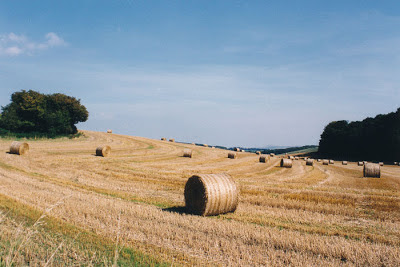 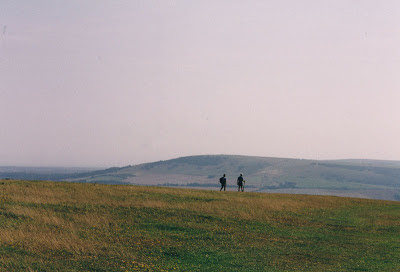 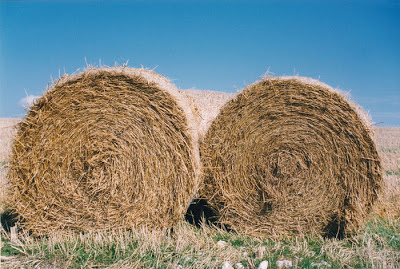 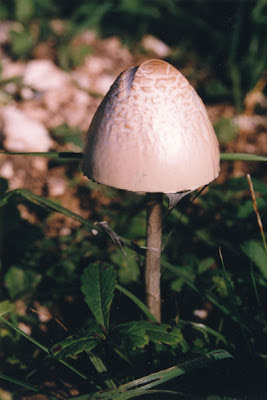 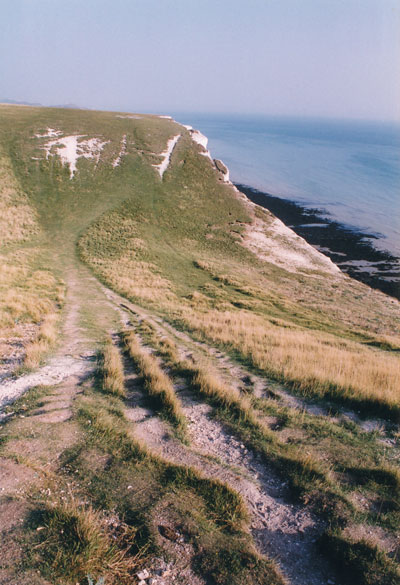 For more information about the route, click here.
Posted by Steerforth at 4:55 pm

No need for any digital trick, en effet.
I feel like humming "It's a perfect day".

Wonderful photos. They tempt me to try that walk someday. How long did it take you? (And if more than a day (presumably, unless you're remarkably speedy!), were there convenient places to stay?

The sun in the photos is particularly attractive on this gray and snowy day in Chicago.

Tororo - The sound I remember from that walk - more than anything - is that of the skylark, soaring above. People have written poetic tributes to the beautiful song of the skylark, but of course it's actually just saying "This is my territory. Go away!"

Levi - I completed the walk in stages, over five months. I lived in London at the time and discovered that Clapham Jaunction station was an excellent conduit for all of the railway lines that connected to different points of the route.

I took a train to a station near the route and walked until I reached another line. Sometimes it was an eight-mile walk; the maximum was 23 miles.

I know people who have taken a week's holiday and walked 15 miles per day (there are companies who arrange accommodation along the route), but I think that the weather in England is too unreliable for that option. I'd rather make sure that I only walked when there was a guarantee of sunshine.

A super, pictorial reminder of what a green and pleasant land we live in.

Oh thank you for these pictures! A reminder that we will, at some time, feel like walking outside in shirtsleeves, in the warm sunshine....Won't we? Won't we?
AnnaC

Glorious, evocative pictures. The South Downs Way travels along such an astonishingly beautiful part of the world and your photographs capture that perfectly.

I have only ever seen a slow worm once, at my Grandparent's house in Cumberland (as it was then) in the seventies: I'd love to see one again. Trefusis Minor asked me what one was the other day and I had to look it up.

Martin - It is indeed - something worth fighting to protect, every time someone suggests a solution to housing shortages and traffic congestion.

Anna - This has been a particularly soul-destroying winter. Perhaps I've felt it more this year because I've been working in an unheated barn, where the books feel like blocks of Cornish ice cream. It's hard to believe that in a few weeks, it could be t-shirt weather again.

Helen - I didn't see a single slow worm during my childhood in rural Teddington and wasn't quite sure what it was when I first encountered one. I had some vague recollection of adders having zigzag patterns, so I wasn't worried about being bitten, but I didn't know that it was a lizard without legs. What a townie.

I was equally ignorant when I arrived back in Lewes after a launch party and was followed home by a stoat. What was this half-cat, half-dachshund creature behind me?

I have a Collins guide to British wildlife, but I never seem to quite find the time to read it.

Your photos are fabulous and reveal one of the reasons I love Britain so much. Everywhere you turn there are beauties if you will just take time to look. Even the drive from my sister-in-law's house to her daughter takes us through beautiful farmland and patches of countryside -- but you have to get off the motorway to see it!

Yes, that's the lesson I've learned: turn of the satnav, avoid the main roads and regard getting lost as an opportunity, not a problem.

When I did the first walk on the South Downs Way, I didn't take a map because my guidebook had map extracts which, like an idiot, I thought would be adequate. I didn't realise that once I took a wrong turning and wandered out of the area covered by the tiny extract, I'd be in trouble.

But getting lost turned out to be a Godsend that ended in me bumping into a friend I hadn't seen for 12 years, so these days I try to embrace uncertainty.

Thank you for showing these photos they are wonderful in the way they capture a quintessential English spirit and feeling.

Some lovely memories for you.

You are too modest Steerforth - gorgeous shots!

Thanks for the tips, Steerforth. Knowing that it's all (or most all) accessible from Clapham Junction is a huge help--not surprisingly, when I'm in the UK I'm always London-based. I may just try a stage next summer.

If I had to recommend a section, I'd pick either the beginning or the end. Winchester to Buriton is a lovely walk and you can explore the city first. At Buriton, you can catch a taxi to Petersfield, which takes you back to Clapham Junction.

I'd also recommend Alfriston to Eastbourne, via the Seven Sisters - that takes you through meadows and woodland and ends with a spectacular walk along the cliff tops. Eastbourne itself is a bit of a downer, as you have to pass a succession of old people's homes on the way back to the station.

My only warning would be to bring lots of water and a bite to eat. Sometimes I walked for hours without coming across a single pub or shop and the midday sun could be quite unforgiving.

You really are a good photographer.

I think these are great pictures especially when one considers that film photography didn't offer any on-the-spot feedback as to whether or not you got the shot you wanted. And one had to be careful film and developing cost money. Ah, now I get it. Because film and developing could be pricey, we were much more careful in setting up pictures. Then again, I have become a better photographer using digital cameras. My film photos were generally awful.

Thanks Thomas - I much prefer digital. I can't forget the crushing disappointment when I collected my newly-developed photos, only to discover that my perfect picture was actually slightly out of focus or badly composed.

But having a limited number of shots did focus the mind wonderfully.

Thirty years ago, I walked from Wilmington to Eastbourne one summer's day. Quite a change from British Columbia!

I remember finding two lads with a car battery and a CB radio who were ready to bolt when they spotted me, but who proudly showed me how they were chatting with Italians and Spaniards, thanks to the miracles of wave skip.

A great walk in a very special place.