"Who fed me from her gentle breast,
And hush'd me in her arms to rest,
And on my cheek sweet kisses prest?

So begins a mid-Victorian publication called "My Mother's Picture Book", published by George Routledge. It's a fairly unremarkable publication in many ways, but it has some extraordinary colour plates: 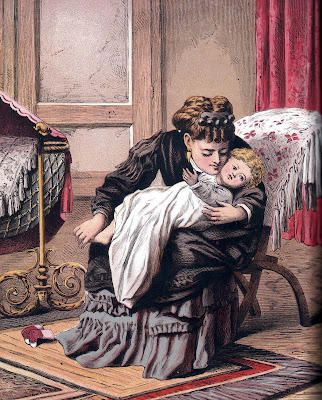 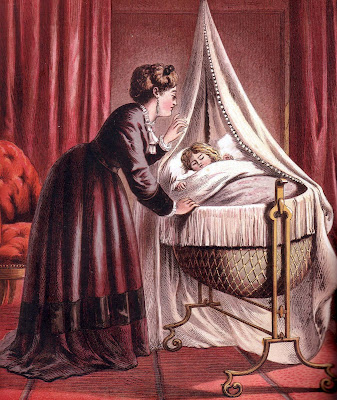 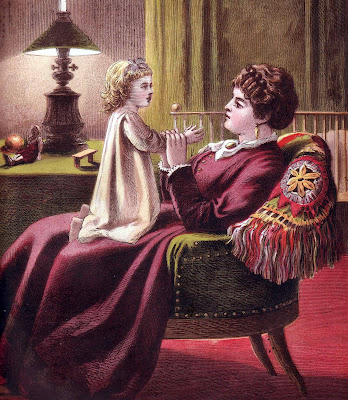 As I have written before, until recently I had no idea that the Victorians had the technology to produce colour plates. In a previous post I asked why it took so long for colour printing to become the "norm" and received this fascinating answer from a graphic designer:

"It's much more complex than just expense. Colour printing and tinting have been around for a long time, but were expensive, time consuming and very wasteful - so only small numbers of books or folio's would be produced, hence their consumer was wealthy, educated and had 'leisure time' - hardly anyone in Victorian England would fit into that niche - even the 'middle classes' would baulk at the extravagance of colour print. as a new technique - it was also an 'entertainment' - which is why it was generally dedicated to expensive childrens books ( and scientific folio's ).

If you have a really close look - you may find that some of the more subtle colours on your plates are hand applied - far cheaper than contemporary print."

These plates must have seemed remarkable to their Victorian audience: 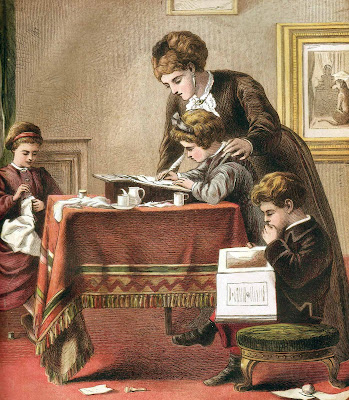 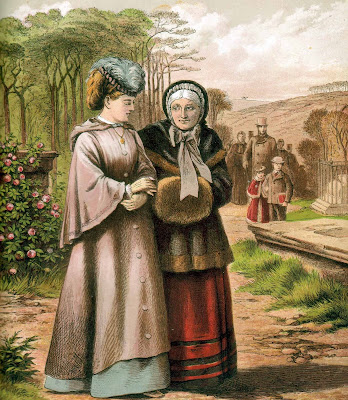 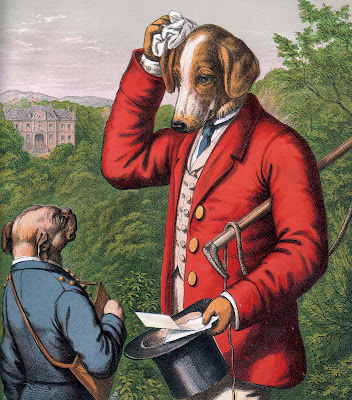 This plate is both weird and wonderful. I love the vivid colours and the rather disturbing anthropomorphisation.

The canine theme continues for several other plates: 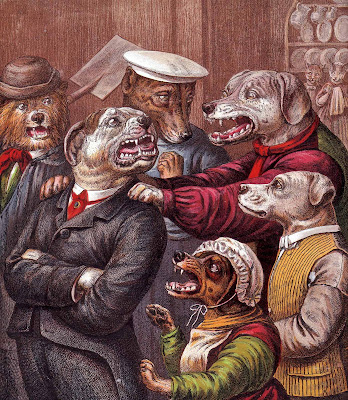 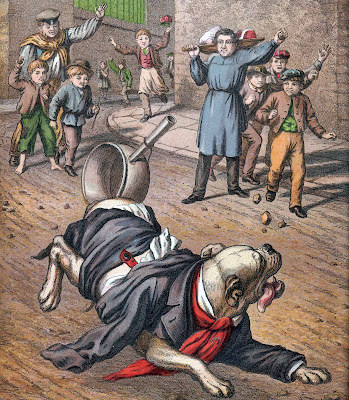 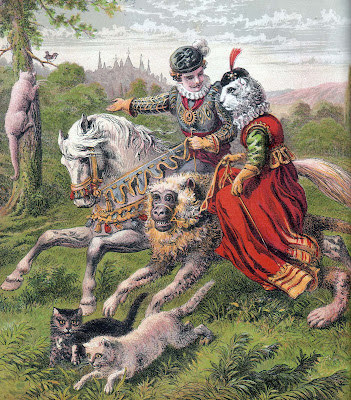 Next, we have some disturbing inter-species romance. It reminds me of a very rude joke, which I can't repeat here. 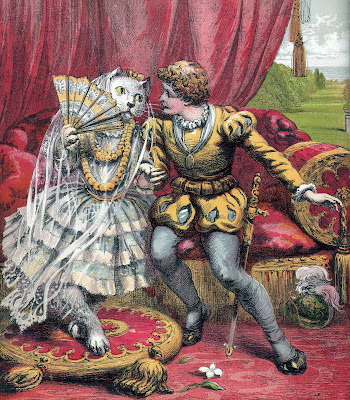 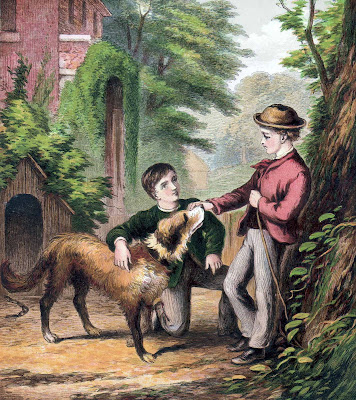 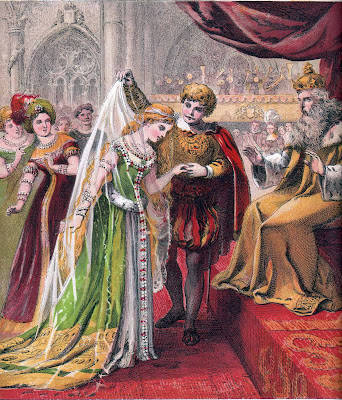 As you can see, the romantic ideal of the Victorian era looks like a mid-80s Scouser, sans shellsuit. 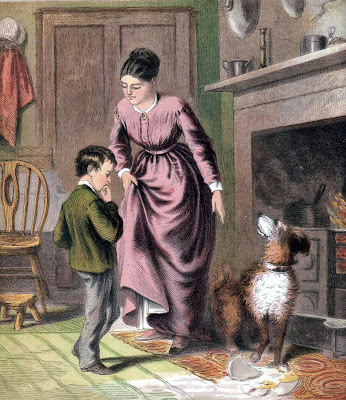 What always strikes me about Victorian photos and illustrations is how many layers of clothes everyone seems to be wearing. 19th century prudery aside, it's easy to forget how cold everyone must have been for a lot of the year. 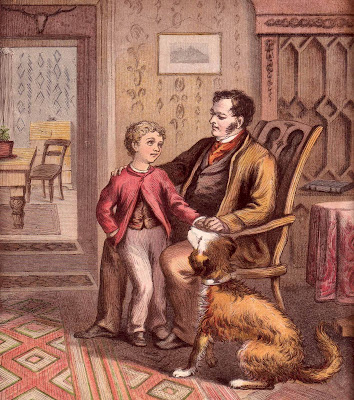 "Now Frank, about those magazines we found under your bed..."

Actaully, Frank is the hero in this story, which reads:

"Frank and Robert were two little boys, about eight years old. Whenever Frank did anything wrong, he always told his father and mother of it; and when anyone asked him about anything he had done or said, he always told the truth; so everybody who knew him believed him."

"But nobody who knew his brother Robert believed a word he said, because he used to tell lies. Whenever he did anything wrong, he never told his father and mother of it; but when asked about it, he denied it, and said he had not done it."

Why is Robert so different? In a penetrating piece of psychoanalysis, we learn that:

"The reason Robert told lies was, because he was afraid of being punished for his faults if he confessed them. He was a coward, and could not bear the least pain."

This book must have cost a mint in the 1870s. What a pity that these colour illustrations were accompanied by such a plodding, banal text.
Posted by Steerforth at 9:34 pm

Thank you for that. The inter-species plates are truly weird and wonderful! And the Victorian psychology explaining Robert's behaviour is wonderfully simple. Nowadays I suppose the experts would say that Robert "couldn't manage" to tell the truth because he had low self-esteem and simply needed more support from everyone.

I agree Christine. Rightly or wrongly, we don't use the word coward any more.

An early example of the 'yummy mummy' in the earlier prints methinks.

Fantastic but disturbing inter-species imagery as you say.

Re the last few plates, I'll bet both little boys (virtuous and non-virtuous) died at the end - as was almost always the case in Victorian children's books to prove some moral point or other, though this did make it difficult to see the benefits of virtue if the same fate awaited the good child as the naughty one, unless he was supposed to receive his just rewards in heaven.

I have no trouble believing most Victorians (even wealthy ones) were shivering most of the time, hence all the textile yardage.

oh, please tell us the joke!

I really couldn't! All I will say is that it involves an ostrich and a cat.

Aha, that was enough to go on. Many thanks!

Think the interspecies story must be "The White Cat" which appears in one of the Andrew Lang coloured Fairy Books. The denouement is even more shocking... The yummy mummy appears to be wearing a "tea gown", which was a warm velvet dress you could wear at home (without a corset). Is that all her own hair? As for colour printing, what about all those late 18th century Mother Goose books? Or were they coloured by hand by children paid 1/4d an hour?

Thanks for the link. I will now Google "Andrew Lang" and "opium" ;)