Yesterday a colleague at work sent me a link to a wonderful website called Europa Film Treasures, which contains a huge archive of films from as long ago as the 1890s. In particular, he highlighted a short 1913 film featuring a tram ride through the streets of Dunkirk.

That may not sound terribly promising, but the key thing is that the film was taken from the tram, not of it, so the viewer is treated to a fascinating glimpse of life in the early 20th century. Our perception of the early 20th century as a rather stuffy, orderly world with polite, well-behaved children, is a far cry from the more anarchic one depicted in this short film.

I haven't been able to embed the video, so you'll have to click on the picture to see the film:

The cheeky lads who dodge in an out of the tram's path and kick a market stall would probably receive an ASBO today. But given that this was 1913, a much grimmer fate must have awaited some of the boys.

The website also includes another tram-based gem from 1908, shot in Barcelona. In this film, a ridiculously large number of people appear to have a death wish and narrowly escape from being crushed under the wheels of the tram. Perhaps these people still dared to think that the streets belonged to them.

You can see the film here: 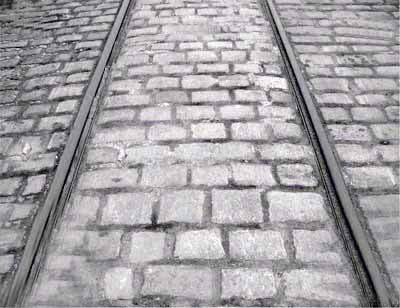 The website's other gems include an 1899 re-enactment of the Dreyfuss affair, a history of saucy Austrian films from the fin de siecle and this hilarious performance of the Traffic Policeman's Song.

These short films strike a contrast with the stiff, formal world portrayed in many photographs from this period. Suddenly, the past doesn't seem quite so foreign.
Posted by Steerforth at 9:36 am

Thanks so much, I always look forward to your blog posts

That was excellent. Those cheeky boys certainly had enough energy.

Wonderful film I have also viewed a similar film taken from a tram in San Francisco before the earthquake then the same route after the devastation. Especially striking that this was only 100 years ago and how much costume, transport and architecture
have changed.

Now when was it the world began to be in full color rather than black and white? ;-)

That San Francisco footage was used as the video for Air's "La Femme D'Argent": http://www.youtube.com/watch?v=NINOxRxze9k

Again, a lot of people, cars and horses just wandering blithely across the tracks only metres in front of the tram.

Ah yes. Reminds me of another one, from a few years earlier and a few hundred miles away--Bradford, in fact. Drives right by the street where I was born, sixty years later...

How wonderful. It almost seemed like the start of a Disney film.

Treasures. I love to see these glimpses of the past on film. They don't seem such bad boys to me; only excited by the novelty. Did you notice men raising their hats to the tram?

I had a professor of French history who thought the couple of decades before the Deluge of 1914 were the best time to have been alive.

I used to ride the streetcars in New Orleans. They were the drinking man's friend.

You might enjoy this movie from a cable car in pre-earthquake San Francisco.

Many thanks for this. It's fascinating - the next best thing to time travel.

The San Fransiscans seem a more sober bunch than the Barcelonans!