One of my favourite books a couple of years ago was Little People in the City, which featured photographs of installations by the street artist Slinkachu.

If the name Slinkachu doesn't mean anything to you, his art is quite easy to describe. In a nutshell, he puts model figures - only a couple of centimetres tall - in normal urban settings. Sometimes they're accompanied by minature props like this scene with a toy car: 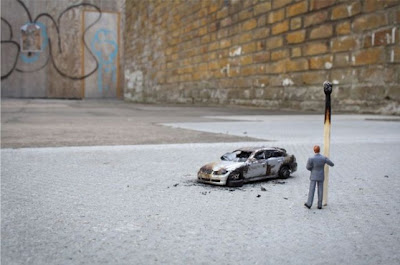 But usually, Slinkachu's figures interact with ordinary, everyday objects, like this piece of orange peel: 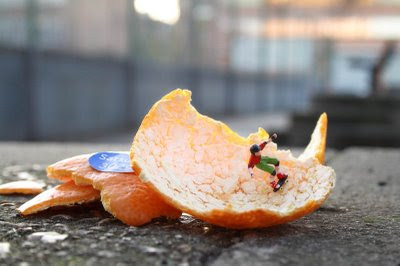 The results are not only very funny but also occasionally moving, as Slinkachu's "little people" try to negotiate their way through a hostile, urban landscape. Their vulnerability is ours. In the artist's own words, "I like my things to be melancholy, like loneliness, and people lost and alone. I don't know why."

I have posted some Slinkachu images before, but these ones appear to be new: 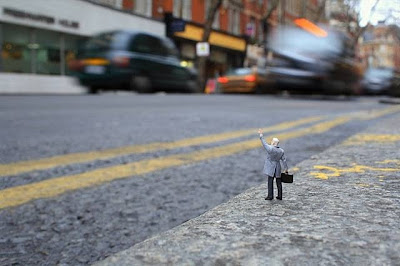 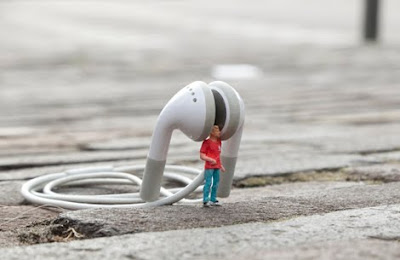 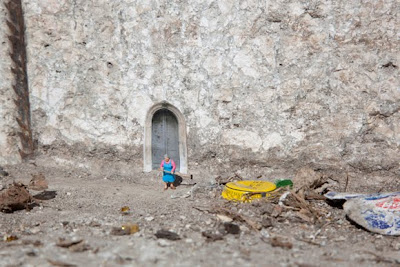 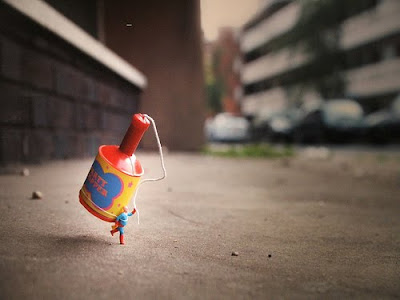 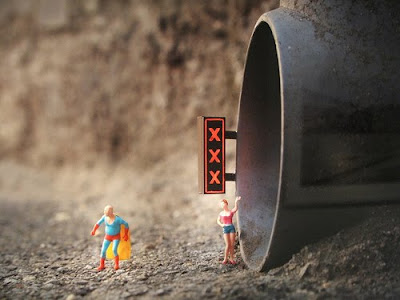 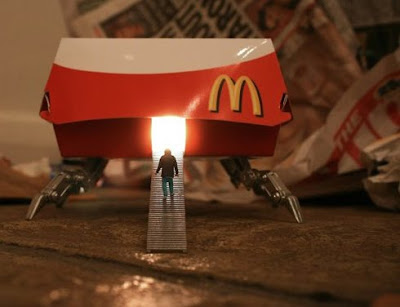 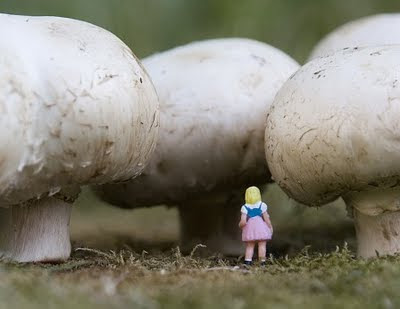 The reason for this post is to plug Slinkachu's new book, Big Bad City, which is already out of stock at Amazon (but their marketplace sellers still have some). 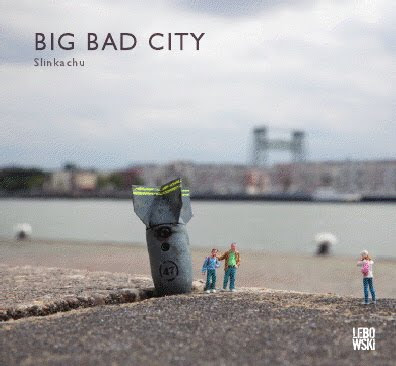 And if you think this might be you're cup of tea, I'd also recommend the blog Economy Custard, which I discovered through the excellent Bookseller Crow's site.
Posted by Steerforth at 8:10 pm

Email ThisBlogThis!Share to TwitterShare to FacebookShare to Pinterest
Labels: slnikachu

Slinkachu is new to me. Thanks for the introduction.

I'd never seen those before. How cool!

Slinkachu is new to me too, he/it/she is brilliant.
Amazingly imaginative.

I scrolled back to your last post, can I put in a bid for Ludlow as one of the most middle class towns in the UK? Lewes has very little that Ludlow doesn't have too, in spades.

Ludlow has 'food' on top of everything else.

I came via Martin H.

These are amazing and oddly uplifting. I've always loved miniature things, and what you say about these images reflecting our vulnerability makes good sense. Perhaps that's why children are so drawn to create very small worlds? Thanks very much!

Ooh, not seen these before! It reminds me, I recently found the My Modern Metropolis blog and have been blown away by some of the artists and photographers talking about there. I keep meaning to blog about the ones I've really liked....

I was aware of Slinkachu - even flicked through one of his books - but I did enjoy Economy Custard and I've passed a link onto one of my friends whose a photographer.

OK - I'm all over Christmas. Every single in-law catered for, with a single well-chosen book.

On a more macabre note, Slinkachu's work reminds me of the 'Nutshell Studies on Unexplained Death.' In the 1940's Frances Glessner Lee made very detailed miniatures of real crime scenes to be used as a teaching tool for criminologists. Here's a link: http://brucegoldfarb.com/the-nutshell-studies-of-unexplained-death

Not for the squeamish, but definitely fascinating. There's even a book about her work - and yes, I have it, because I'm strange that way:-)You can see the actual models in Baltimore at the Medical Examiner's Office.

I'm glad to see that other people like Slinkachu - I wonder why he isn't more well known?

Friko, I haven't been to Ludlow but from what I've heard, it is a serious contender for the number one spot.

Jim - I'm glad you like Economy Custard. It deserves to become a book.

Magiciansgirl - Thanks for the link - what a wonderfully macabre site! Fascinating. I can see why you bought the book.

The art dept at school found his first book and the kids had a go at doing some with lego minifigures - great fun. I love these pictures.