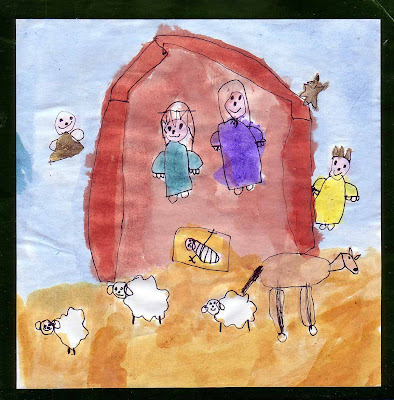 Christmas in the Steerforth household has been a subdued affair. With impeccable timing, I came down with "swine flu" on Christmas Eve and have been upstairs in bed ever since.

She is now worse than me, although that may be the result of her decision to tackle the symptoms head on by drinking a bottle of wine. I have been more cautious, taking a few tentative sips of port, like a consumptive Victorian gentleman.

In all of this, my mother has been the heroine of the hour.

Like a special agent called out of retirement for one final mission, my mother has taken charge of the children, introducing them to the delights of white bread and egg and chips, whilst managing to make our kitchen look tidier than ever. It has been good for her and great for us.

During one of my more delirious moments, I began to feel as if my entire adult life had been an illusion and I was really back home, in Teddington, listening to my parents in the room below. As if on cue, my mother cleared her throat and the theme tune to "Upstairs Downstairs" boomed through the floorboards.

Later, my wife explained that it has returned for a new series (if you can call three episodes a series):

I caught up with the first episode on the BBC iPlayer and to my amazement, it wasn't crap. Admittedly, Tom Stoppard's son Ed wasn't fantastic, playing the role of Sir Hallam Holland in the style of a regional sales manager for a chain of East Midlands car exhaust centres. But the rest of the cast were spot on (particularly the monkey) and it was particularly wonderful to see the return of Jean Marsh as Rose: 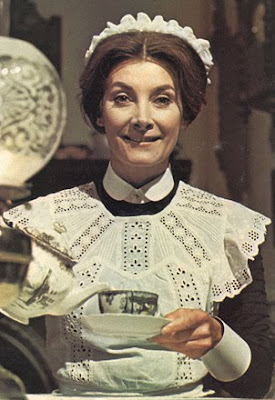 I can't wait for the next series.
Posted by Steerforth at 9:47 am

My sister brought the plague known as Swine Flu to Iceland from England few days before Christmas, much like Hval-Einar Herjólfsson brought The Plague from self-same country in spring of 1402. Several of my kin have succumbed, but I remain hale and hearty.

So sorry to hear of the illness in your house but your post made me laugh so much I had to read it out to my fella.

I do hope you all get better soon.

So sorry to hear of your horrid illness over the festive season Steerforth. And Mrs Steerforth too - what bad luck. Thank goodness indeed your mother was there to ride to the rescue. It must be nice for her to feel she can repay some of your kindness in nursing her back from her own health woes.
I am sure you can pull the children back from the white bread brink in time anyway, as they might like it for a few days, but I doubt they will prefer it to the more flavoursome wholesome variety in the long term.
I watched the complete original Upstairs Downstairs a couple of years ago when ITV3 kindly screened it for three hours ever Sunday in consecutive order and it was utterly wonderful. I have not yet seen the new series and feel no great desire to do so now the Bellamy's are no longer in it, but it is good to hear it is not as terrible as I feared. I honestly don't care for re-hashes by and large, even if they are blessed by the likes of Jean Marsh.

Get well soon! I mean, before you feel as though you've landed a walk-on part in Goodnight Sweetheart.

I had a similar retro experience last evening. We looked after the grandchildren, while our daughter and son-in-law sloped off to the cinema. I nodded off in the perishing cold lounge, only to wake up in the midst of a series of flashbacks to The Good Life. After coming to my senses, I realised a strange truth, we are Tom and Barbara (although we dumped self-sufficiency years ago) to our daughter's Margot and Jerry.

If you enjoyed that try and see Downton Abbey if you've not already. As you might expect from writer Julian Fellowes - he wrote Gosfork Park - the writing is excellent but the story is damn good too. Needless to say Maggie Smith steals every scene she's in.