Podcasting at The Lewes Arms

After years of running various bookshops in the South East, I have developed a Pavlovian response to the phrase "local poet" and automatically go into fight or flight mode. I have good reasons for this, but my blinkered attitude almost stopped me from discovering the wonderful Oliver's Poetry evenings at The Lewes Arms.

When fellow blogger Laura told me that her friend Oliver held a monthly poetry evening at a local pub, I imagined that there would be a lot of terribly earnest people reading rather bad poetry and almost didn't go. Luckily, I had the good sense to trust Laura's judgement and had a great evening out.

Thanks to Oliver's years spent running a leading comedy club in London, the evenings feel more like a gig, with a good rapport between poet and audience. As for the poems themselves, the quality is consistently high and I often leave wishing that I could hear them again.

But if you do visit Oliver's Poetry evening, be warned: you will be expected to write a limerick in the interval!

The most recent limerick competition had a Royal Wedding theme:

Next month, on Byron's 223rd birthday, Oliver will be publishing a book called The Commuter's Tale: 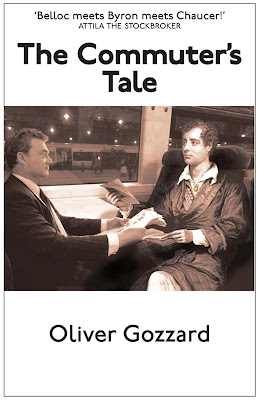 Described as a "thriller in verse", The Commuter's Tale was written by Oliver during two years of commuting from Lewes to London.

I was going to write an article about the book, but I had a better idea: why not record an interview with Ollie in the convivial surroundings of The Lewes Arms? The result is the first Age of Uncertainty podcast!

The following interview was recorded in one take and if I had to do it again, I probably wouldn't have had a couple of pints first, as I sound as if I should be presenting the 1936 Royal Review of the Fleet at Spithead. However, Oliver is thoroughly entertaining.

Click on the player below to hear the interview:

During the evening, Oliver commented on the fact that a lot of women kept coming up to us. Unfortunately, we soon realised that it was because we were next to the the ladies loo.

Here is Oliver in full bardic mood, reading a canto from his new book. 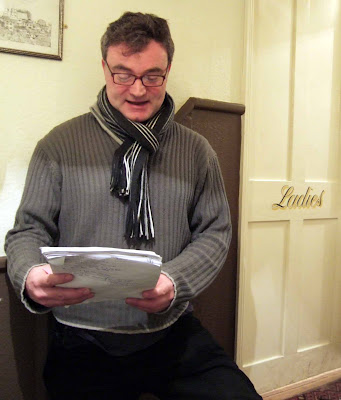 For more information about The Commuter's Tale, visit www.deserthearts.com.
Posted by Steerforth at 11:07 am

Well done! Going by the evidence at hand, it seems clear that an evening of poetry in an English pub trumps one in a Canadian coffee house.

At a wedding in Westminster Abbey
A duchess was terribly crabby
"Heavens above!"
"They're marrying for LOVE!"
"Next, they'll expect to be happy!"

Brian, I've tried alcohol-free poetry events in cafes and yes, a pub is a far more relaxed venue (assuming that the pub isn't in some hellhole in SE London).

Thanks very much for this fine blog entry, Steerforth.

I enjoyed being interviewed by you and am sure that the women who spoke to us were interested in more than the ladies'!

Being interviewed for a blog made me feel like we were at the cutting edge of the Blogosphere! Well done!

I'm flattered by your confidence in my judgement Steerforth since I didn't know whether Lewes Poetry was any good or not being as I live rather a long way away, Oliver merely TOLD me it was and I believed him. ;-)

However I do happen to concur that it is not compulsory for poetry to be read in a flat monotone voice by someone with an inflated opinion of themselves and a very lowly opinion of the audience whom they presumably desire to buy their books, and it was anally-retentive poetry evenings such as these I was particularly tired of before performance poetry came along to kick ass - sometimes for the better, sometimes for the worse, but always interestingly.

Then again the old style 'serious' poets tended to drip contempt for everyone, not just the performance poet upstarts who dared to give them a run for their money and make the better ones raise their game and realise they needed to engage with, and not just recite at, their audience.

Having said that I consider that Carole Anne Duffy (albeit a good poet if someone else read out her work) is one of the worst public readers of all, and she's just made it to Poet Laureate.

I agree. When I worked for Ottakar's, we had a competition for National Poetry Day every year, which culminated in an awards evening where the winning poems were read out.

Sometimes I used to plead with people to let me read their poems, because I knew that they'd sound like an I-Speak-Your-Weight machine, whereas I'd happily ham it up. Some were grateful, but others insisted on reading their own poems and delivered the lines with all the passion of the Speaking Clock. I can understand why, but there's a difference between creating and performing.

The beauty of Oliver's poetry evenings is that although most of it feels like a comedy gig and we have a lot of fun, I know that there'll always be at least two poems that are breathtakingly beautiful.

Unrelated, but I was in Guildford yesterday, saw the bearded lady wandering the High Street, and thought of you. Thought you'd be amused to know!

Unrelated but most welcome! Any sighting of the Bearded Lady fills me with joy.

Well done! Such fun to hear your voice. Small world, apparently, with Oliver's comedy club appearing in a book by A. A. Gill, whom your Grey Area fellow thinks is evil.