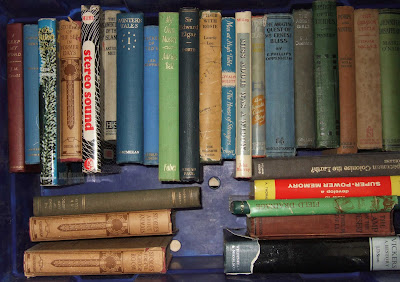 The following images are of a random selection of things that have appeared in deliveries like the one above, during the last few days. None of them are worth a penny, but to me they are priceless: 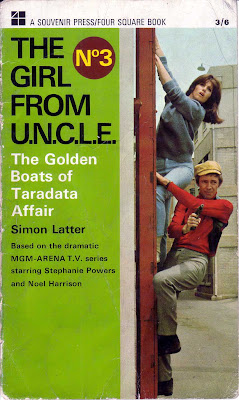 Until yesterday, I was blissfuly unaware of the existence of "The Girl From U.N.C.L.E", Look! It's Stephanie Powers and Noel "Windmills of Your Mind" Harrison. The fashions are very "Girls who are boys, Who like boys to be girls, Who do boys like they're girls..." I'm not sure about the hat. 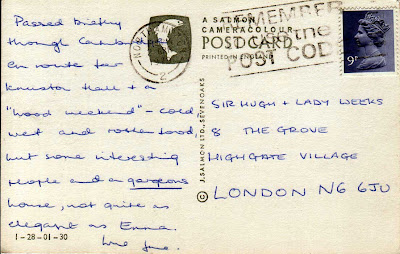 My address book desperately needs a Knight of the Realm in it, but sadly Sir Hugh is no longer with us. A quick search on Google reveals that his neighbour's house recently sold for £6,000,000. 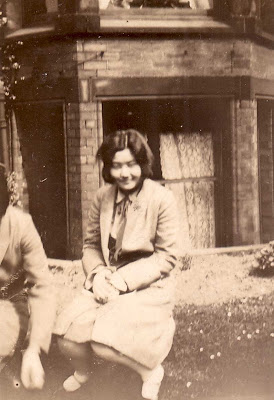 This mysterious photograph has no name or date, but if I had to guess, I would say that it's London in the 1920s-30s. The way the photographer has almost completely cut out one of the subjects reminds me of my mother, who once managed to take an entire film of her left eye. 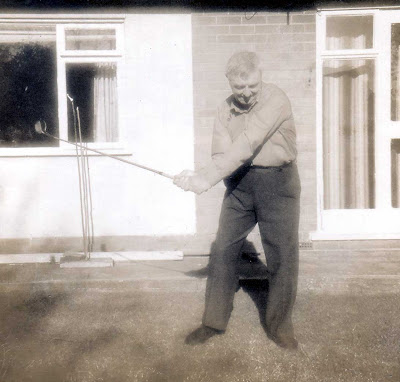 Spot the ball, from the good old days, when men's trousers came right up to the diaphragm. 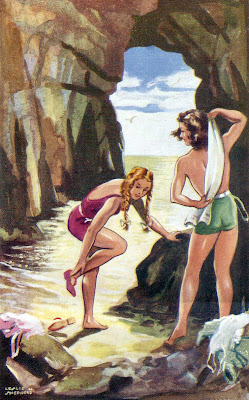 "Josephine and Cherry were the first out of the water", from "It Turned Out Fine", by M. E. Host. Not one of the most compelling book titles I've come across. I'd gladly read a book called "The Approaching Tempest" or "The Angry Sea", but "It Turned Out Fine" conveys all the drama and excitement of a weekend in Torbay.

However, the slightly suggestive illustration by Leslie H Shepherd suggests that beyond the terribly dull title, there might be more to this novel. 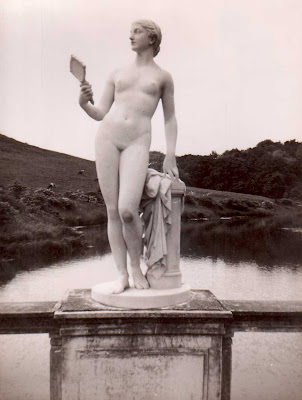 This enigmatic, Classical nude that looks rather out of place in this setting. As usual, there was no information about the photo and there wasn't even a tenuous link between the book and the image.

And on the subject of Classical nudes:

What was it with the 1960s? I blame it all on the Skiffle bands.

In my early teens, I went to stay in a cottage in Somerset that was full of books like these. I sneaked a few into my room and almost trembled with anticipation at the forbidden fruits that lay ahead.

Needless to say, the books were as disappointing as X-Ray Specs.
Posted by Steerforth at 10:59 pm

I watched The Girl from U.N.C.L.E. at the time but I honestly don’t think I’ve ever seen it repeated since. The Man from U.N.C.L.E. films get repeated fairly often but not the series. I’d sit and watch them again. At least I think I would. Maybe they’ve dated badly. And why with all the “reimaginings” going on has no one thought to do The Man from U.N.C.L.E.? They can’t make a bigger mess of if than Starsky and Hutch. Great theme tune too. Almost up there with Hawaii Five-O.

Looks like John has more to worry about to me...

I think there is a happy medium to be had between mere suggestion and the rampant full-on sex scenes that seem to be found even before the end of chapter 1 these days.

A slow build-up with a bit of mystery attached is far more alluring.

The most thrilling my teenage reading got was a book wrapped in brown paper atop my mothers' wardrobe entitled 'Love Without Fear'. It was all about what venereal diseases you could catch if you shared WC seats etc, though there were a few drawings of other goings on which I assumed must be some kind of abstract art.

Sometimes I see youngsters these days who look like they've never been innocent.

But you don't tell us anything about the books in the picture. I would love to know more about "Miss Addie was a Widow", or "The Amazing Quest of Mr Ernest Bliss" - I've always enjoyed E. Phillips Oppenheim, and that's a title I've not come across.

Sorry S. I've lost your email address (again!!) - can you drop me a line, I have someone who wants to talk to you about work.

Jim - have you looked at The Girl From U.N.C.L.E on YouTube? They haven't aged well.

Laura - I also wonder what it must be like to grow up in the age of the internet. No more sneaking downstairs to watch a saucy French film on BBC2 - it's all there on Google, minus the mystery and romance.

Universal Acknowledgement - perhaps I should write more about some of these books. I'm frequented amazed by how little information is available about some writers, even though they were incredibly popular in their day.