As much as I love working with books, it is the paraphernalia that comes with them which really excites me. Hidden in a novel that is trying to encapsulate the human condition, I often find a photograph or note which manages to say more in a simple image or sentence than most authors could achieve in 200 pages.

That's not a slur against writers. It's more about authenticity and intent. Photograph albums tell us so much and so little at the same time. The albums lie, in that they create a completey false impression of lives lived in perpetual happiness and sunshine, but each photo is unintentionally revealing. Behind the smiles and blue skies, there is a subtext: this is what I want my life to be.

The gulf between the people we'd like to be and who we actually are is pure Richard Yates.

Last week I came across a family's photo album, which had probably arrived at our warehouse because it was book-shaped.

The album is the story of this woman, who was a keen dog breeder: 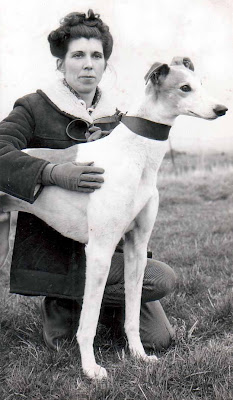 At some point in the late 1940s, she marries a man who shares her passion for dogs and they move here: 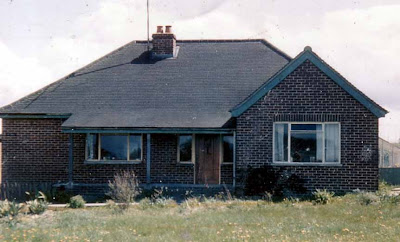 This bungalow is typical of the poor quality, jerry-built housing that flourished in Britain until more rigorous planning legislation was introduced. Today it is next to some dog kennels. Perhaps the husband and wife were responsible for establishing their home and the kennels.

From the photo album, it is clear that dogs were almost their whole life: 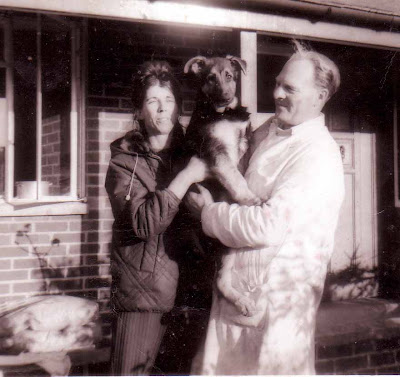 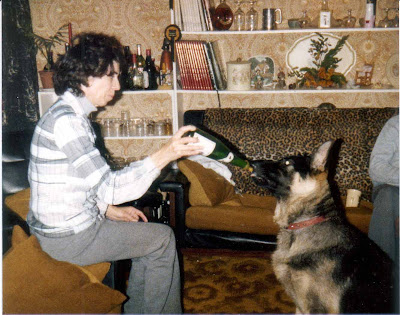 Indeed, over half of the the album consists of photos of dogs. But in between breeding dogs, the couple managed to find the time to have two children: a boy and a girl. Here is their young daughter in the late 1960s: 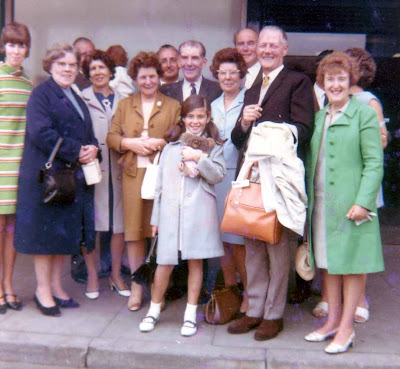 And here is their son: 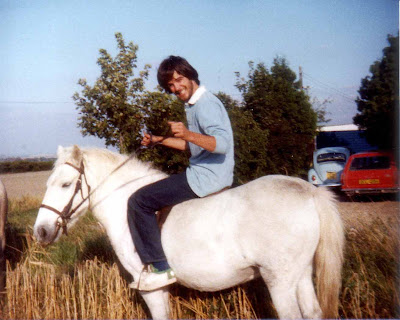 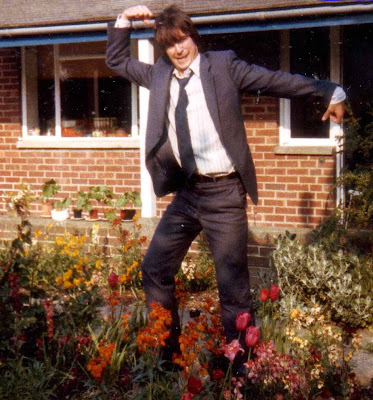 There is no discernible chronology to the album. Events in the daughter's life - graduation, marriage and the birth of a child - are presented in a random order and both children are eclipsed by the numerous photos from dog shows: 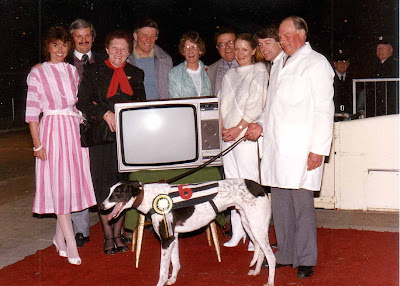 The woman and her husband must have been well-known figures in the dog breeding world and many of the photos are official portraits from shows, where they had won first prize.

Were they a happy family? Aside from the fact that the dogs seem to take centre stage in the album, there is nothing unusual about the photos of family gatherings and boating holidays. These are ordinary people who seem at ease with themelves.

But then I turned the page and saw this: 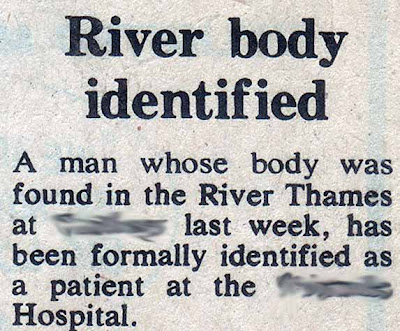 On the same page, there is a photograph of a gravestone. It is their son's.

Another newspaper cutting reads: "Our dearest son and brother died after much suffering. You were so very brave and were greatly missed."

The album ends here. There are no more pictures of dog shows or boating holidays. As far as I can tell, the couple lived for many years after their son's death, but they chose to end their album with this photo: 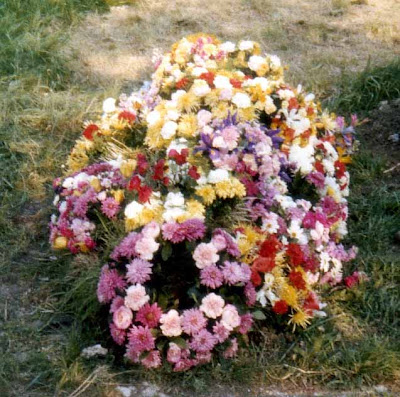 I had been complacently flicking through the album, enjoying the 1960s fashions and scenes from dog shows. Nothing prepared me for the shock of the final page.

I went back through the album, and photographs that had once appeared rather comical now seemed terribly poignant. These innocent, smiling faces had no idea what was in store for them.
Posted by Steerforth at 9:46 pm

That is so sad, it has made me cry. We all have our own personal tragedies; that is a particularly poignant one.

Wow. But such are peoples' lives. What do you do with the photo albums? Seemingly, in this case, you might be able to identify the owner; if you can (and if you have the time, obviously), do you try and return the item?

That is shocking, though I suppose looking back at the photos, the son seems almost too anxious to portray he is having a wonderful time and is a zany, up for anything sort. I wonder what his problem was, since he looks like his only quibble in life might have been coming second to the dogs!

I wouldn't even begin to try and guess. I have a friend who is one of the best mothers I've ever met. Indeed, she is wonderful with children in general and was brilliant with my oldest son, who has a few "issues".

Four months ago, her 18-year-old son hanged himself. He had experience depression for the first time and was so frightened that he decided to take his own life - a long-term solution to a short-term problem.

At the inquest, my friend's GP said that her son couldn't have had a more loving mother.

I think this is what's so tragic about these photos. Obviously we know nothing about this family, but we can all empathise with the pain they suffered.

Mrs Jones - I do try to return certain items to their owners, but it's complicated - not everybody wants to be reunited with episodes from their past. I have to tread very carefully.

And I was exactly the same, carried along by the photos and totally unprepared for having my feet kicked from right under me.

Like everyone else, I came to the end of this with a shock and a jolt and tears. This post, and this family will stick with me.

I'm not sure if this is useful - but Irving Finkel

has founded a collection of diaries of ordinary people. (This is separate from his work in the British Museum.)

I've also been racking my brains to remember the name of a photographer who specialised in taking family-album-style photos in order to emphasise their importance. (Jo somebody.) She died some years ago but this book shows how right she was.

I'm glad I visited. I'm glad I read this. I'm glad you emphasised that, whatever caused this man to take his life, one cannot automatically assume there was anything wrong with the family he belonged to or that he was not loved. People are complex!

I am so sorry to hear of your friend's son. Am sure that made the discovery of this photo album all the more poignant.

My whole childhood was pretty depressing but perhaps that stood me in good stead for hoping that life could only get better as an adult (which it has, albeit at a much slower pace than I would have hoped).

And I guess I was lucky enough to grow up in an era before mobile phone and facebook bullying had been invented - youngsters have so many more stresses on them nowadays than anyone can guess at, even if their parents do try to be nicer to them than mine were.

I've actually been on a suicide training course to deal with distressed youngsters but thankfully have not yet had to put it to use amongst our students. One thing the trainer told us was that it's never anyone else's fault when a youngster kills themselves - it's never something you've said or haven't said, always a combination of factors which may or may not be known, though I suspect this is only of limited comfort to a poor blameles parent who did their best.

Yes, I was partly thinking of my friend, but also of my own son, who seems to carry the weight of the world upon his shoulders.

If isn't wasn't for my wife's determination to have a second child, I might have gone to my grave thinking what a useless father I was.

But my youngest son is the polar opposite of his brother: a sunny natured individual who can't stop himself jumping for joy. He often says how happy he is, which is something his brother never did.

I worry about the future and I have to confess that this album and my friend's experience struck a chord.

Unknown said...
This comment has been removed by the author.
9:08 pm

Good god, that it sad, and almost unreal to find a photo album that has such an obvious and tragic "plot". As I was reading your post I was thinking, "oh the son is awfully cute..." then to suddenly see that had died young really hit me between the eyes.

I guess 'poignant' is the only fitting word, isn't it? I'm so pleased you share these finds with us - if there's one thing your posts show me its that we ALL live lives from novels. As soon as someone else writes our story and re-arranges our photos, we become a narrative, with subtext and all sorts. A few years ago, I started writing my diary in third person. It has the same effect.

@Esther Your comment about a photographer specializing in family-album type photos piqued my interest. Is it Jo Spence? http://www.answers.com/topic/jo-spence

I'll be thinking about this blog post (that I found purely on accident) for the rest of the week. Amazing entry. Thank you for sharing.

There's a blog for that: