"They've gone from playing in a sandpit together as kids to producing one of the most critically acclaimed albums of the year. Alex Petridis meets the xx, the band quietly taking over the world" - The Guardian Weekend magazine 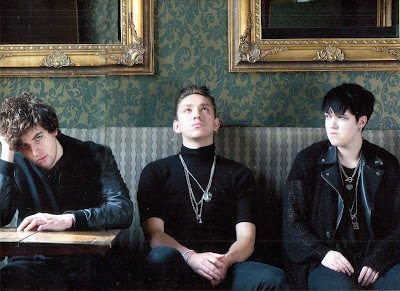 If I had a pound for every time a broadsheet hailed a band as the next big thing, I'd be able to afford a weekend for two at a Best Western hotel in a provincial city. Off season.

There is something particularly laughable about a thirtysomething broadsheet journalist trying to tap into the zeitgeist. I'd hate to be a rock critic. Every year you're a little bit older, but the bands, like policemen, seem to get younger and younger. How do you maintain your street cred?

I remember thinking that anyone over 25 was the enemy. When I was at university, there was a rumour going around that a friend was actually 27. We were horrified and felt a raw, visceral disgust, as if someone had asked us to sleep with a pensioner.

The only person over 25 who had credibilty was John Peel.

As for the xx, I was about to write a diatribe about boy bands and the way they try to look so mean and moody in photos, because they're so ridiculously serious about their music. It's only pop, not Mahler.

However, I was wrong on two counts. First, one of them is a girl. Second, the music is rather good. I can't say I'll be playing it in the car, but if I was 19, I'd have loved its miserablist soundscape and pretentious lyrics (or at least pretended to).
Posted by Steerforth at 6:33 pm

Email ThisBlogThis!Share to TwitterShare to FacebookShare to Pinterest
Labels: rock journalism, the xx

Probably through an impending mid-life crisis, I am a thirty-something consumer who tries to tap into the musical Zeitgeist, as a result of which I buy much more music these days than I did five years ago. I bought The xx album after it made most critics' end of year lists for 2009, but I really don't see the appeal at all. I suppose we can't like everything. One album which topped my list for 2009, but which didn't seem to make the critics' lists, was Bird Brains by Tune-Yards. Here is my favourite song from the album.

Is xx something to do with chromosomes? The older I get, the older the music I buy is. My last two CDs were released in the late fifties.I was 5 then.
I'm finding the only new music I like now is jazz, folky, or experimental
- Graham Fitkin on Radio 3 last night was great.

John, I did exactly the same thing at the same age - a rage, rage, against the dying of the light, perhaps. When I was 25, I couldn't be arsed and didn't care.

I liked Bird Brains - I'll stick it on my MP3 player and enjoy it in secret.

Rob - I seem to be increasingly obsessed with music and culture that was produced between the time I was two-years-old and twelve, as if I'm trying to make sense of the world that made me. However, given that this era saw Pet Sounds, Taxi Driver, Songs in the Key of Live and Pink Moon, it's hardly surprising.

I can just squeeze into your demographic - I was 11 when Pet Sounds was released, according to wikipedia, which also lists the session players, an unbelievably talented bunch including Glen Campbell, Larrry Knechtel, Hal Blaine, Barney Kessel... God Only Knows still gives me goosebumps.

By the way, I meant Songs in the Key of Life. I still have a 45 of I Wish and the sound of the crackles and the bass blows any CD out of the water.

Oh dear, does this mean I am banned from liking Dizzee Rascal, being over 25?

In fact I must shockingly confess that my car radio is permanently tuned to local dance music station 107.9 FM (Radio 4 at home). Not all of it is good - in fact a lot of dance music is shockingly bad, but I like keeping my finger on the pulse. not to mention astonishing our students by being able to hold my own in any dialogue about the latest music. In addition 107.9FM is very open minded about who listens/appears (I have been on it a couple of times to promote recent OxFringe show) and has an intelligent 'all-girl' breakfast show featuring intelligent presenters Sophie and Rosie who you just know are going to be big. Although both 20-somethings they last week bemoaned how music is FAR too loud at gigs these days and gives them headaches! I immediately e-mailed to say how whole-heartedly I agreed and that too many DJ's confused LOUD with GOOD and played everything at full force, just because they could. This was all immediately broadcast with a lovely personal e-mail reply from them within the hour.

How could anyone fail to like such a station?

I have a feeling I would find it very easy to dislike this station...