Yesterday I drove to Chichester to meet someone who had some books to sell. I only had half an hour to spare, but I managed to squeeze in a visit to the cathedral: 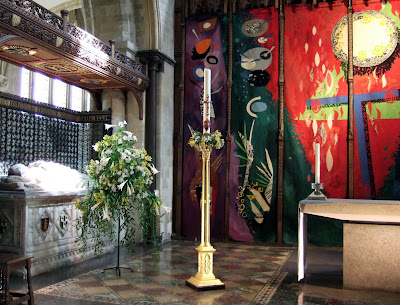 The cathedral is beautiful by any standards, but what makes it particularly stunning is its successful blending of the ancient and modern, thanks to the extraordinary vision of George Bell and Walter Hussey. 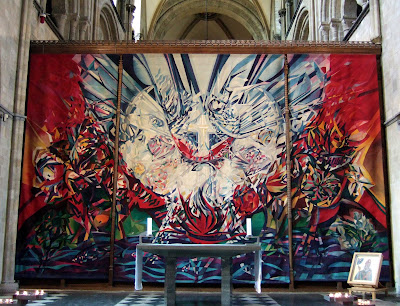 I love the way that medieval tombs sit alongside bold, Cubist-inspired tapestries. I know that these contemporary works of art ruffled a few feathers when they were installed, but nearly 50 years on, they seem perfectly at home. Bishop Bell's vision has ensured that the Cathedral is a living church rather than a museum piece. 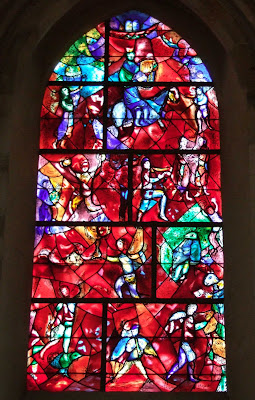 When I returned to work, I tried to convey the excitement of Chichester Cathedral. "They've got a Marc Chagall window!"

"Who's Marc Chagall?" came the reply.

I had forgotten myself. Most of the time, my work persona is an amiable, two-dimensional caricature - one that allows people to fill in the blanks themselves. When people ask me what I'm doing at the weekend, I lie. It's much easier to say, with a world-weary sigh, that you're taking the 'kids' to the Sea Life Centre ("Isn't it expensive these days!") rather than talking about the new Paul Nash exhibition that you want to see. Paul Who?

Sometimes I wish I'd stayed in London.

However, it's not all bleak. I now have some bright young things working for me who want to talk about more than last night's match. I'm sure that they would appreciate this: 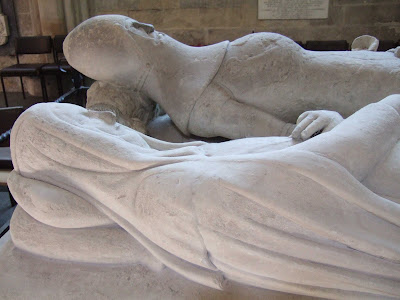 The medieval Arundel Tomb is remarkable. I have written about it before here, three years ago and quoted the full Philip Larkin poem, with its beautiful last line, "What will survive of us is love".

Chichester is nice. It has plenty of historic buildings and even the local Marks and Spencer appears to have had some sort of preservation order imposed on it. I haven't seen this font for years: 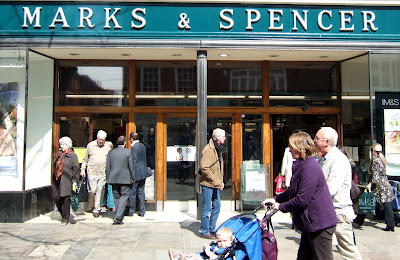 But I wouldn't want to live there. Perhaps that's because I associate the place with Waterstone's.

When Ottakar's was bought by HMV, my shop became part of a new Waterstone's area and I was required to attend monthly regional meetings at the Chichester branch. They were not happy occasions. I had left Waterstone's in 1994, vowing that I'd never work for them again. Suddenly, without my consent, I was back and this Waterstone's was far worse than the company I'd left 12 years earlier.

As Waterstone's managers had gradually had their autonomy eroded by a succession of retailers, the meetings had a very limited scope. We discussed burning issues like "How can we successfully promote the new loyalty card?" or "What's the best way to make people buy Waterstone's gift cards instead of Book Tokens?"

After enduring several hours of trivia, I used to sneek across the road to Chichester Cathedral and look at the Arunel Tomb. Every time I looked at the 700-year-old stone carvings, I felt grounded. The ephemeral nonsense of loyalty cards and campaign changeover would pass. The things that really mattered would remain.

Here is Philip Larkin himself, reading An Arundel Tomb...

Posted by Steerforth at 9:06 pm

Lovely video. Really enjoyed that, thanks.

I do hope you get to the Nash it's on until May 9th and in June there are three generations of the Wyeth family to look forward to.

May 9th? I'd better get my skates on.

We seem to have led parallel lives. The whole Waterstone's scenario you describe has given me cold sweats. I left, swearing never again, not after the Dickensian Spring Into Shape campaign, ended up back, slit my throat with a loyalty card blah blah blah. Liverpool not Chichester is all. Thankfully, I now have a proper job, and in my absence, Waterstone's has killed all other high street bookshops. Swings and roundabouts...

Thanks for the comment Lulu - I worry that some people might think that I bang on too much about Waterstone's. Surely they couldn't be that bad, or hugely different from Ottakar's?

From my point of view, the contrast was huge. At Ottakar's, I worked for an employer who believed that staff worked best when they enjoyed their job and felt supported by their head ofice. They even had a "Best Fun" award for staff morale (which I'm proud to say that my branch won, out of 120 shops).

If I had an opinion, I felt that it was regarded as an asset, not a threat.

Above all, I felt liked and valued.

Perhaps the best illustration of what was great about Ottakar's is this: one year I complained that the annual managers' meetings gala dinners were a bit dull and needed livening up. I volunteered to disguise myself as a publishing rep in his mid-50s (with ruddy chees and bad hair) and do a powerpoint presentation of forthcoming titles.

There were around 200 people in the hall and when I emerged through a door, wheezing and spluttering, nobody recognised me.

The titles were all fake. Each one had a cover that took the piss out of one of the senior management team. Everyone loved it and the guest speaker - John O'Farrell - graciously said that it was much funnier than his speech.

At Waterstone's, I wouldn't have dared to criticise any aspect of the managers' meeting - I'd have been labelled as a "troublemaker". As for the fake Powerpoint presentation, they'd have treaed me as if I was insane.

The management at Waterstone's were completely humourless. Add to that an abysmal book knowledge (the MD had never heard of "On the Road")and it was hard for me to have any respect for them.

Sorry, that should read "ruddy cheeks" above.

I'm totally with you. Management were always lit-ignorant, and those staff that knew their stuff soon became so disillusioned that they left, fed up with being little more than shelf-stackers and till-monkeys. Of course, Waterstone's HAVE recently sacked all the top brass and are, in theory, giving autonomy back to the stores and the individual buyers. So we'll see what happens. Is it a result of realisation or desperation?

Brett said...
This comment has been removed by the author.
5:31 am

When I think of Chichester I think of the Leonard Bernstein piece they commissioned back in 1965. Perhaps the same atmosphere out of which those fabulous screens were commissioned?

Thomas - I love Bernstein's "Chichester Psalms" (although his best choral work has to be "Songfest").

Brett - I don't know why you deleted your comment. I was going to respond but was having a blog-free weekend. Your story of the loyalty card rang horribly true.