A Swift Rebuttal (Or 'Robert's Resolve')

I found a children's book today called Timothy's Resolve, by Winifred Wilson. It was good, wholesome stuff. Just the sort of book you'd award as a school prize, to reward 'good conduct' and 'diligence'. 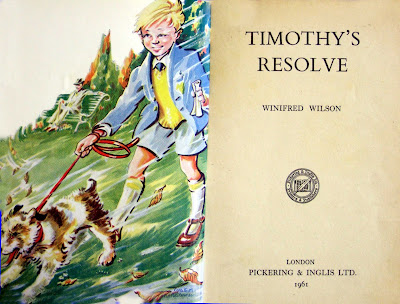 This copy of Timothy's Resolve was awarded to a boy called Robert Swift: 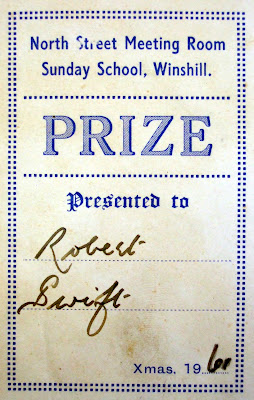 Unfortunately, Robert Swift didn't receive his prize with good grace and the back endpaper looks like this: 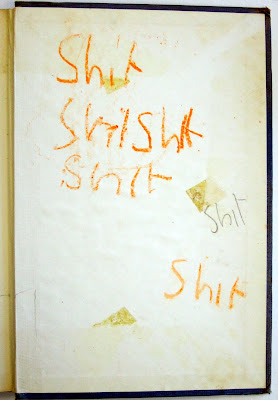 I wonder where Robert Swift is today. If he's alive, he'll be in his sixties and I wonder how he'd regard his juvenile scribblings.

I have a lot of sympathy with Master Swift. As a boy, I was forever being given books that I didn't want to read. Even at eight, it was clear that their agenda was to improve me, rather than provide the fun and escapism that Enid Blyton gave me. My aunt, who was a missionary in Africa, gave me Christian adventure stories. Another person handed me a copy of The Incredible Journey and kept quizzing about it every time I saw them. The only people who didn't burden me with unwanted gifts were my parents.

As a result, I have a horror of presents, particularly books and films. The moment somebody gives me a DVD or novel, I know that at some point in the future, I will be expected to tell them what I think of it.

When I worked in a bookshop, customers would often ask me for a recommendation for a child who was starting to read. My reply was always the same: 'Give them a book token, then they can make their own choice.' Even if the child buys complete crap, it doesn't matter. They have bought their first book and they are now a reader. The rest will follow.
Posted by Steerforth at 8:41 pm

Your post had me smiling from the very first line. As a child I loved reading, but those horrid Sunday School books that were so piously presented were more often than not a dreadful reading experience. While no one ever asked me about my treasured Enid Blyton's everyone and his dog wanted to know about the Sunday School books. Of course, being the perfect Sunday School pupil that I was, I lied. My punishment for lying about how much I enjoyed 'Little Women'? Every Birthday and Christmas for the next two years I received a Lousia May Alcott book until I had the entire revolting series.
Maureen Hume www.thepizzagang.com

This made me snicker, and snigger, and chortle. And all those good things. Your blog is a delight. I'm afraid I've tagged you in a meme. Do ignore it if you like, I nearly did, but then thought The Blog God might smite me dead with a thunderbolt or something. They're the chain letter of blogging, aren't they? hmmm.

I got a book token at school once. The thing was it was the kind you could also get other stuff with. So I bought a Deep Purple album, 24 Carat Purple, but they wouldn't present it to me. I had to bring in another book and that's what the sticker got stuck inside.

Maureen - every week I deal with hundreds of very dull novels, nearly all with bookplates inside commending children for good conduct. Enid Blyton was the Elvis Presley of children's books.

Mrs Trefusis, I have never been memed before, so I'm flattered to have been chosen.

Jim - A good choice. By that single act, you have secured yourself lifetime street cred. I'm not sure if Freddie and the Dreamers would have quite cut the mustard.

Wind and Weather permitting by Prudence Hill for my project A Day at the Zoo (2nd Prize). I've just found it and thanks to you it will be my holiday reading in the top left hand corner of Wales. We will be having both wind and weather there.

I know exactly what you mean about memes; whilst it's lovely to be tagged, it's a bit of a mixed blessing. I couldn't for the life of me answer the original questions, & had to tinker with them to wring anything out of it at all
there's something oddly peeving about memes, &it was only when I read your (lovely) comment that I realised what it is that peeves. I think it's the idea that one *has* to write to a formula, a little like being at school. I like to write as and when the spirit takes me, & about whatever it is that's in my head at the time. Memes take the fun out of it a bit, at least it did for me, though I cheered up when I fell across that video. Tee hee.
George Orwell is a magnificent choice. Though thinking about 1984 always makes me want to re-read Brave New World (read the two back to back at 16 in some bonkers 'compare & contrast' exercise at school. Have since reread 1984 but not the Huxley) I suspect I might find it rather hard to decide which I thought the bleaker these days.

Not quite as enticing a find as yours, but my father-in-law gave me some old-school copies of King Lear and Hamlet he had during the 50's.

The inscription on the inside of each cover: "This piece of crap belongs to Edgar."

A long love affair with literature, as you can tell.

Happily I have sublimely good taste and an unerring ability to choose the exact right presents, including books - the sort the recipiant would have chosen for themselves if only they had known it existed.

Good read... my indoctrination as a child was of the same methods...