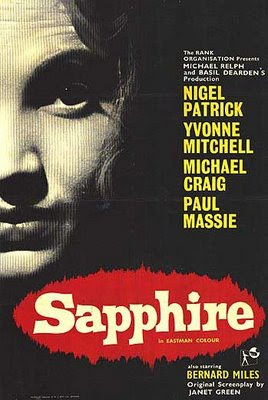 I've just watched a film called Sapphire, directed by Basil Dearden in 1959. On the one hand, it's a typical police procedural 'B' movie, with square-jawed, two-dimensional detectives, negotiating their way through a gallery of stereotypes. On the other, this is a remarkable film that explores a side of British society that was generally ignored.

The film opens with the body of a young woman being thrown on the ground. A jazzy soundtrack (played by the Johnny Dankworth Orchestra) establishes that this is going to be a gritty, hard-edged thriller. No poison pen letters or old ladies here.

Unusually for a film of this type, it's shot in colour and gives a vivid portrait of London in the 1950s: a shabby, grey, depressed-looking city that still hasn't recovered from the Blitz. What a contrast with America in the 1950s.

The Second World War effectively bankrupted Britain and it is striking how drab everything looks, from the clothing to the dull interiors. No wonder the Sixties happened.

Sapphire begins conventionally enough, but after only ten minutes the film suddenly - and without any warning - changes gear and what begins as a typical murder mystery turns into a story about racial bigotry, with the shock revelation that Sapphire Robbins was 'coloured'!

Filmed less than a year after the Notting Hill race riots, Sapphire is a brave attempt to depict the endemic racism in Britain towards the burgeoning West Indian community. Unfortunately, it is done in such a heavy-handed way that the film's agenda isn't always clear.

Fifty years on, scenes like this can make uncomfortable viewing:
'No matter how fair the skin, they can't hide that swing.'

The implication that anyone with black ancestry, however distant, has an irresistable compulsion to tap their feet to the rhythm may be one of the many reasons why this film isn't on DVD.

It's a shame, because I think that Dearden's heart is in the right place and he became well known for tackling controversial subjects.

Two years later he filmed Victim, with Dirk Bogarde risking his career as a mantinée idol to play a homosexual lawyer. Unfortunately Janet Green's screenplay for Sapphire is populated by stereotypes, not real people.

Take this hilarious scene involving a female police sergeant:
So there we have it. If you do a man's job, you must be a lesbian.
We can laugh now, but if I was a woman in the 1950s I'd feel like throwing a brick at the screen, particularly when the detective says 'There's a good girl'.

The sum of Sapphire is greater than its parts, thanks to the controversial subject matter and Basil Dearden's direction. Dearden's 1951 film Pool of London, which is the first post-Windrush film to feature an inter-racial romance, is now available on DVD. I hope that Sapphire will also be released in the near future.
Posted by Steerforth at 12:57 pm

That's a wonderful film - there were a raft of films around that time that caught the changing mood of mid century Britain - and despite it's obvious shortcomings now - is a benchmark in British Cinema ( rather like 'Victim' ) - have you seen "London Belongs To Me" - earlier and more traditional - but just as good.

Indeed. I love YouTube, although it took me a pathetically long time to work out how to upload these clips from my copy of the film.