I have just returned from a week's caravan holiday in Dorset. I don't think there's any need to go into further detail - it's one of those statements like 'I've just spent the last three months being held hostage in Iraq' or 'I'm going to have my left leg amputated' which requires no further comment.

Here are some holiday snaps: 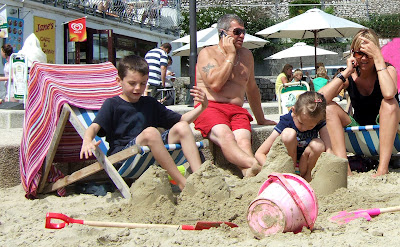 This is the beach at Lyme Regis. The parents in this photo managed to sunbathe and spend ages chatting on their phones without any interuption from their children. The boy seemed content to either stare into space or watch his sister build a sandcastle. What's their secret?

My sons are feral and the oldest one had to be rescued by the coastguard within an hour of arriving at the beach. 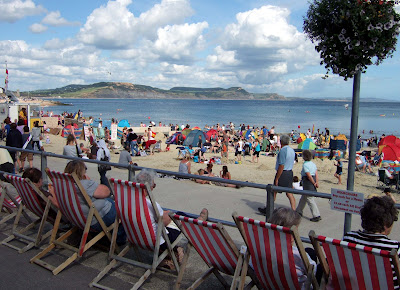 Ever since I was a boy, I've looked forward to the days when I can play Crown Green bowls and sit in deck chairs at holiday resorts. 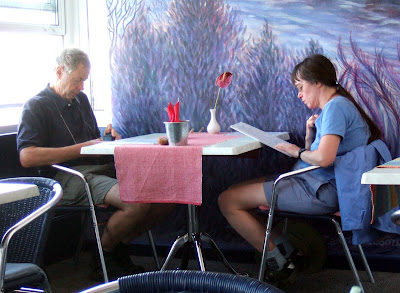 This couple sat on the table behind us in a beachside restaurant. I love observing couples in restaurants, particularly unusual ones like these two. They sat largely in silence, but whether it was companionable or awkward I couldn't tell. The long tress of hair suggests that a day of wholesome hiking will be followed by an evening of violent lovemaking. 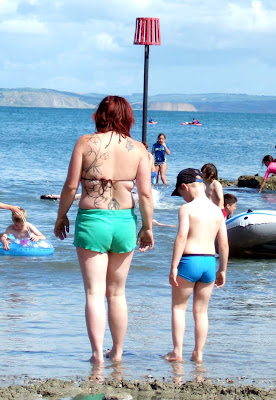 In the great tattoo debate, I'm firmly on the non side and I'm afraid that I saw nothing to change my views. What might look sexy on a young woman in her early twenties, looks increasingly unapealling with age and weight.

On Lyme Regis beach I found myself yearning for an impromptu raid from the Tehran Morality Police. There are only so many beer guts and varicose veins that a person can look at. 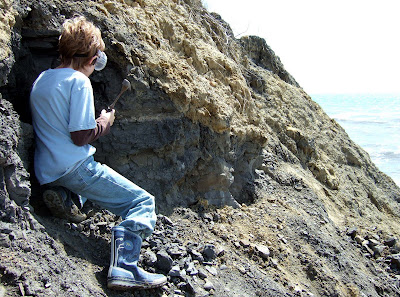 The fossil-rich Dorset coastline is now a UN World Heritage site. Unfortunately, my son's idea of fossilling consists of hitting the cliff face as violently as possible with a large hammer.

The origins of the 'Rude Man of Cerne Abbas' are uncertain. Is he a prehistoric fertility figure? Is his bellicose stance a warning to other tribes? There is no written reference to him before 1647 and it is possible that he is a 17th century joke. 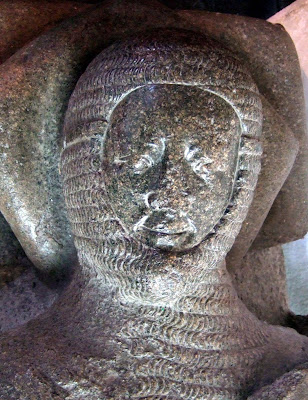 I found this 12th century effigy in the beautiful Lady St Mary's church in Wareham. He looks surprisingly cheerful for a dead medieval knight. The church is full of interesting features, including an 8th century Celtic inscription (see below) and a salmon-shaped weather vane. 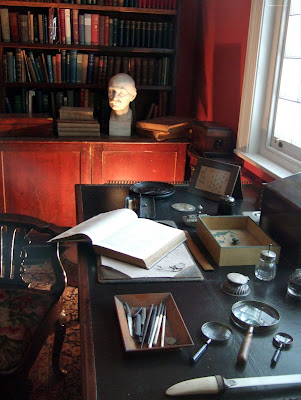 This replica of Thomas Hardy's study is a permanent exhibition at the excellent Dorset County Museum in Dorchester. With the possible exception of the Santa Barbera Museum of Art, this is the best small museum I've ever visited.

The girt woak tree that's in the dell !
There's noo tree I do love so well;
Vor times an' times when I wer young
I there've a-climb'd, an' there've a-zwung,
An' pick'd the eacorns green, a-shed
In wrestlen storms from his broad head,
An' down below's the cloty brook
Where I did vish with line an' hook,
An' beat, in playsome dips and zwims,
The foamy stream, wi' white-skinn'd lim's.

The Dorset dialect is virtually dead, but I once heard a teenage girl say 'Oi bain't' (I be not) to a baffled French exchange student. There may still be pockets of Dorset dialect in some of the remoter 'Squeak like a piggy' parts of the county, but it's unlikely. Even the lovely rural burr is dying out (for non-British readers, the traditional Dorset accent sounds a little like pirates - 'Ha-harr, me hearrties', etc).

However, when the gentleman below was alive, the English language didn't even exist. 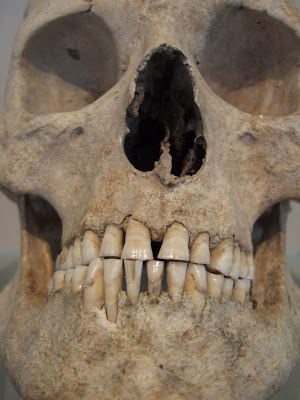 This 4th century skull is one of many skeletons excavated from Dorset's hill forts. One is displayed lying as he was found, with his sword by his side, possibly after a skirmish with the Romans. I'm not sure how I'd feel ending up as a display in a 37th century museum. 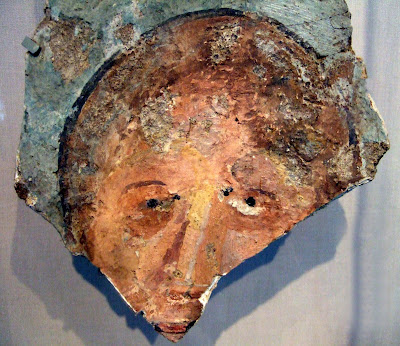 This is part of an 8th century fresco and serves as a reminder of how wonderful English churches must have been before the Reformation saw these craven images smashed up and painted over. 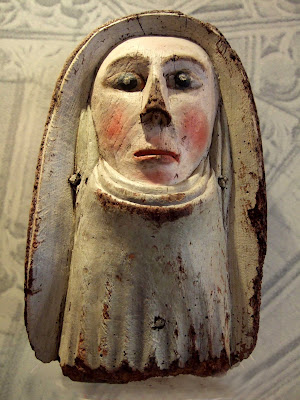 This carving comes from four centuries later. I like the rouged cheeks.

Like many small museums, although there were themed displays, there were also some quirky artifacts that the curactors had inherited from an earlier, more ecclectic age. I really enjoyed the displays of stuffed red squirrels and Victorian washing devices, but couldn't quite muster up the same enthusiasm for the farming implements.

Museums like the British Museum or the Louvre are all well and good, but they are so vast that the visitor ends up feeling exhusted and drained within an hour. I prefer a good small museum any day.

I didn't think my visit could get any better, but then I found this exhibition: 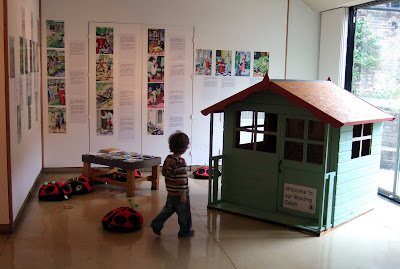 I like Dorset. I probably liked it even more when I lived in London and the sight of rolling hills and blue seas was a rare treat, but I still feel excited when I see the Cobb at Lyme Regis. However, I will not be going there again for a few years.

Whilst we were cowering behind a wind break on Charmouth beach last Tuesday, my wife and I concluded that unhappy parents are not good parents. My ideal holiday involves good weather, decent accommodation, nice food and a mixture of stimulation and relaxation. Our caravan holiday provided bad weather, plastic accommodation, a constipation-inducing diet of microwaveable ready meals and a mixture of anxiety and exhaustion.

Britain may be back in favour as a holiday destination, but next year we shall be heading for sunnier climes.
Posted by Steerforth at 9:35 am

Sam Jordison said...
This comment has been removed by the author.
10:46 am

Thank you Sam. I've just visited your blog and will be adding it to my favourites - the Geoff Dyer anecdote rings horribly true. I used to run branches of Ottakar's and Waterstone's and had more than my fair share of embarrassing or absurd conversations with authors.

That's very kind of you. Exploring your blog has really brightened my day. What fantastic writing. (It actually made me want to go to Lyme Regis too, in spite all...)

I spent a week in Lyme Regis and also visited Poundbury and surrounds a few years ago. It was perfectly pleasant (and we hired a charming ex-fisherman's cottage in Lyme Regis cheaply out of season), but a week was enough for a few years, not least as some drug addict totalled my car at the end of our holiday by driving into the back at high speed.

Did not manage to catch the Ladybird exhibition sadly.

Poundbury was very pleasant but a bit sterile. However compared to other modern 'carbuncles' one really can't complain!

I guess tyhe blog is like a reverse psycology. I love this part of the UK. For accommodation in Lyme Regis and the surrounding area remember to visit this website. I found it to be very useful

You made my day. I smiled when i read your blog. Thank you.