It's hard to believe, but the Hubble Space Telescope is now 18 years-old. After a rather inauspicious debut of blurred images, resulting from British and American scientists working in metric and imperial measurements respectively without telling each other, the HST has produced some of the most awe-inspiring pictures of our time. Only this month it has produced this image of galaxies colliding: 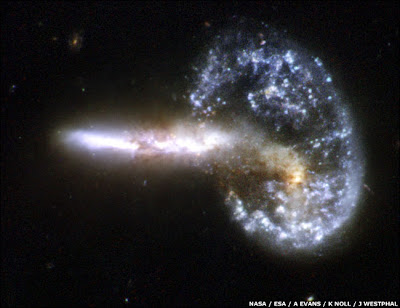 In five years' time a new space telescope will be launched, promising images of a far greater resolution. In the meantime, the Hubble continues to surprise us and it is scandalous that NASA contemplated cancelling any further maintenance missions. Fortunately they relented, but if the accountants had had their way, there would have been a hiatus of at least five years between the HST and its successor.

How can anyone contemplate giving up on the Hubble when it produces images like this: 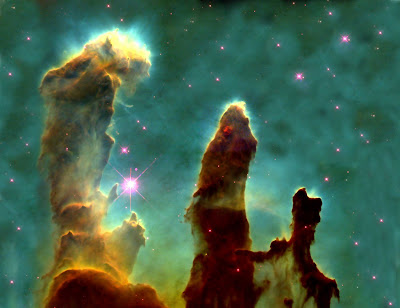 And this astounding photo of deep space, in which every bit of light is a galaxy: 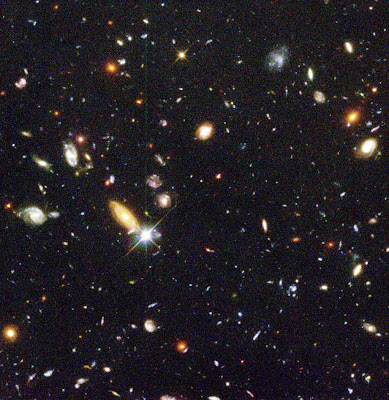 This is one of the most amazing images of our time, but if I mention it to most people they have no idea what I'm talking about. Is it me, or is this odd?
Posted by Steerforth at 6:25 pm

They really are beautiful. Do you know Astronomy Picture of the Day (at http://apod.nasa.gov/apod/)? Amazing stuff.

The galaxies colliding image reminds me of the time I was reading the paper and saw that the woman who used to be my uni physics lab partner, and with whom I had to concoct results to get a passing grade, since we couldn't even measure gravity correctly, had discovered two colliding galaxies in deep space: the biggest cosmological "structure" ever yet discovered by anyone at that time, I believe. At that time I was designing wine-of-the-month cards for restaurants. It gave me pause, I can tell you.

What a great story!

It's not just you; it's just too big to comprehend. And the last picture? It looks kind of like wrapping paper. but yes - incredible.