I don't like East Anglia. It's very flat and there always seems to be a cold wind that penetrates even the most impermeable layers of clothing. Unfortunately my mother-in-law lives there and I usually have to go at least twice a year. She lives opposite a nuclear power station, which has recently been decommisioned but looks likely to gain a new lease of life as a processing centre for radioactive waste. I'm surprised there hasn't been any protest. Everyone in my wife's family has had cancer and a large number of their friends and neighbours have died from it. Perhaps it's just a coincidence, but it seems a lot higher than the national average of one in three people.

Last week we went to stay there for a few days and I decided to challenge my preconceptions by exploring the region. I picked a route at random and set off with low expectations. Initially my prejudices were confirmed and I felt depressed by the monotonous, treeless landscape, but about 45 minutes into the journey I turned a corner and saw this: 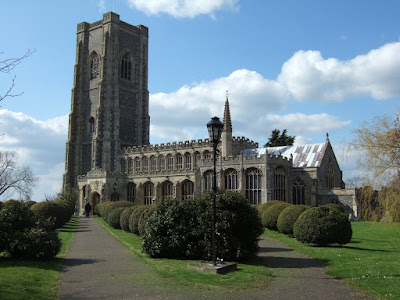 It looked a rather large church for a small, insignificant English village, so I decided to park the car and explore. I discovered that I was in Lavenham, which was once the 40th richest place in England, thanks to the wool trade. During the late Middle Ages, Lavenham experienced an economic boom that enabled its burghers to build a church that looked more like a scaled-down cathedral.

I entered the church and the interior was even more impressive. Everywhere I looked, there were memorials to Lavenham's most prominent citizens. 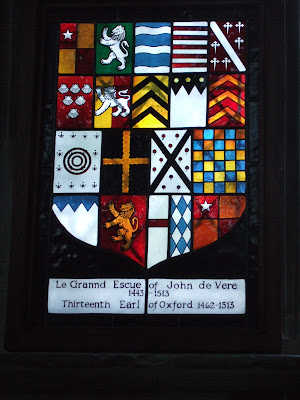 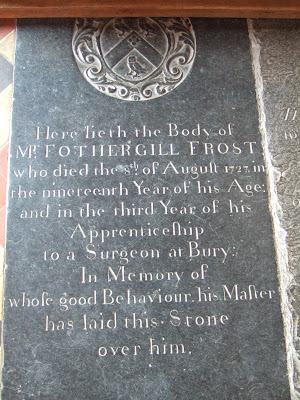 Sadly, the poorer members of the community rest in anonymity, obscured by centuries of rain, wind and lichen: 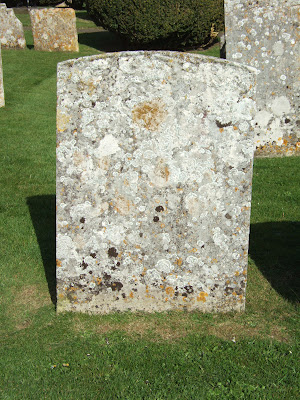 The village looks normal enough at a glance, but where most places might have a few medieval buildings, almost every house in Lavenham seems to be at least 500 years old. 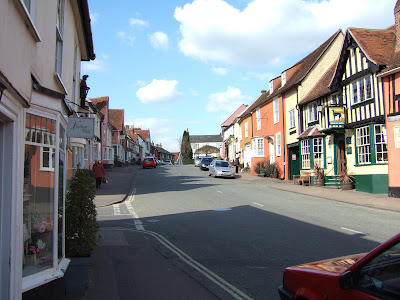 Houses like these seem to defy the rules of symetry and gravity, with upper floors leaning out at strange angles and yet I suspect that these buildings will last longer than many of their contemporary counterparts. 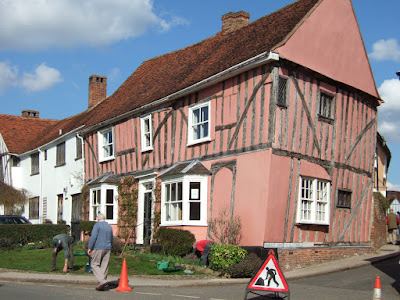 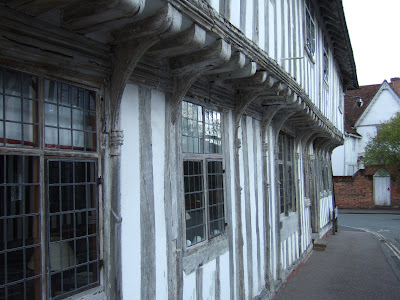 So what's so special about Lavenham? The answer, apparently, is quite simple. The town's wool trade went into a sharp decline during the 16th century and the local people could no longer afford to replace or alter their existing buildings. The village effectively became frozen in time. Today Lavenham is on the tourist trail, but it is still a real community with over a hundred businesses. I was completely bowled over by the place and if you're ever in the area, I'd recommend a visit.

Posted by Steerforth at 6:35 pm

I love the language on that old gravestone: it's both touching and oddly (unintentionally) comic.

As Hardy said, 'Life is basically tragic, with comic overtones' (I'm quoting from memory, but I think that's right)

Lavenham is beautiful. But if you want cold, flat, featureless landscape where the winds can come straight from Siberia with little to stop them, try the edge of the fens around Peterborough. Can't WAIT to move out!

There are still little architectural gems though, even here.