Gems from my record collection...

Picture the scene: the offices of City Musik Produktion, a Berlin record company. It is 1968 and everyone is smoking. In walks producer Hans Bradtke.

'Well Hans, what have you got for us this time?'

'I've got a brilliant idead Helmut! How about taking some Burt Bacharach hits like Walk on By and performing them in the style of Johan Sebastian Bach?'

At this point there should have been an embarrassed silence, or at worst, derisive laughter, but this is West Germany in 1968 and Bacharach Baroque seems like a brilliant idea.

The following year, someone at Sunset Records in London hears a demo of Bacharach Baroque and loves it so much that they decided to release it in Britain. Photographer Bryce Attwell is commissioned to take an appropriate picture for the front cover, but how do you neatly encapsulate the concept of Burt Bacharach being played by an 18 century-style orchestra in one image?

Someone has a brilliant idea.

'I know. Let's have a picture of a fat bloke lying on the grass being fed grapes by a topless woman. Oh, and stick a lute next to him. That should do it.'

I found the result some years ago in a charity shop and had to buy it... 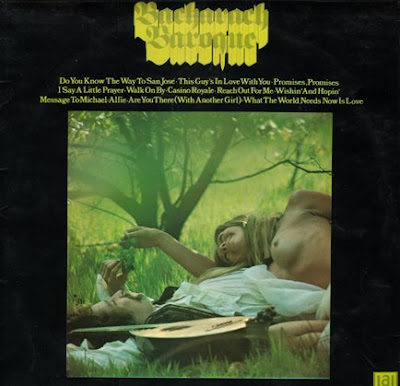 Posted by Steerforth at 1:17 pm