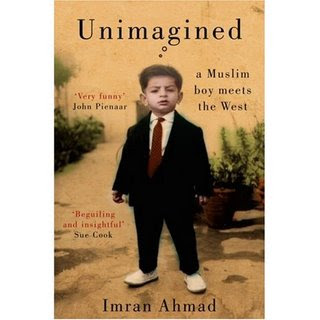 One of the most critically acclaimed biographies of 2007 was Unimagined by Imran Ahmad. It began life as a self-published memoir with a pretty awful jacket and might easily have suffered the fate of most self-published books, but when Scott Pack was chief buyer at Waterstone's he spotted its potential and asked Ahmad permission to forward Unimagined to an agent.

A year later a hardback was published by Aurum and thanks to a combination of canny marketing by the author, glowing reviews in the press and word of mouth recommendations, the book was a great success. I really enjoyed Unimagined. In addition to giving an insight into the cultural clash between the demands of a Pakistani family and British society, Ahmad has written a warm, funny and touching memoir of growing up in the 1960s to 1980s.

However I had another reason for reading Unimagined: I knew the author's brother.

We met in our late teens at the local tertiary college, where we were both studying 'A' levels. I knew that his family were from Pakistan, but I can't remember being particularly conscious of what religion Imran's brother was. After an evening in the pub, he would stagger home, frantically sucking Polo mints to cancel out the smell of alcohol on his breath. My parents weren't keen on me drinking and I assumed that my friend's parents held similar views. I was woefully ignorant about Imran's family and their beliefs.

In Unimagined, Imran Ahmad portrays his parents as being remarkably tolerant, whilst remaining faithful to their values. This tallies strongly with the impression I got. In hindsight they must have known what my friend got up to, but they wisely decided to turn a blind eye. Imran's brother was able to borrow his mother's car to drive to parties (and we had a few hairy journeys home) and when he said that he wanted to do a drama degree, he didn't encounter any serious opposition (as far as I know). He was allowed to enjoy the same freedoms as his peers.

However once the degree was over, the traditional cultural expectations began to reassert themselves. A drama degree was fine, but now it was time to get a proper job in a bank. Then, in his mid-20s, the family began to discuss an arranged marriage. It was probably then that I first became aware of the cultural void that Imran and his brothers had to negotiate every day.

Reading Unimagined has made me feel sad that my friend was so taciturn about his Muslim cultural heritage. When he was an undergraduate he even started to shorten his name to a more English-sounding one and seemed pleased that some people thought he was Italian. Was he hiding his true identity or trying to find a new one that successfully united the two disperate elements of past and present? Either way, he seems to have reconciled the different parts of his life as well as anyone could.

Most of us have to negotiate cultural divides, whether they are between classes, generations, political viewpoints or working relationships, but it is hard to imagine what it is like to be a second generation British Asian, trying to succeed in the country that is your home without betraying your family's cultural values. That fact that Imran and his brothers have been so successful is a tribute to their strength of character and the wisdom of their parents.
Posted by Steerforth at 4:49 pm