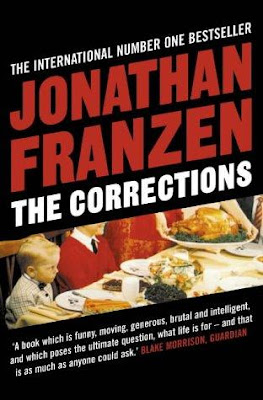 When it was published over six years ago, The Corrections received the rare accolade of universal critical acclaim. I bought the book immediately, but the more reviews I read the more reluctant I became to start reading it. Now that so many people had told me what a great novel it was, possibly the Great American Novel, I felt obliged to enjoy it. If my reactions were anything less than effusive it would be my failure, not the novel's.

Soon friends started to recommend The Corrections and I discreetly moved it to the top of my bookcase so that people wouldn't be prompted to talk about it. Years passed, dust accumulated and the book became a member of my collection of books that I will probably never read. (These include Paul Theroux's My Secret History, Wuthering Heights, Sakarov's Peace, Progress and Intellectual Freedom and The Catcher in the Rye)

Than last week, for no particular reason, I started reading it and from the first few pages I knew that I was reading a masterpiece. Most writing, indeed most art, only aspires to allude to universal truths, but Franzen actually dares to try and spell some of them out. The result is a novel that is both uncomfortable and comforting - the hallmarks of a great work of art. The Corrections makes the reader face some unpallatble truths, but offers solace in the knowledge that these experiences are part of the universal human condition.
Posted by Steerforth at 3:52 pm