Some years ago I was in the National Gallery and saw a group of people huddled around a television screen showing a clip of Laurence Olivier doing the 'band of brothers' speech from Henry V. It was stirring stuff, but I kept being distracted by a man in the crowd who stood head and shoulders above everyone else. Apart from his height there was nothing unusual about his appearence, but he radiated a presence. In the end I became so distracted by the stranger in a beige raincoat that I edged forward to see what he looked like.

It was Charlton Heston.

The clip ended and Heston turned round. An American tourist in a wheelchair said 'Great to see you sir.' Heston smiled benevolently and thanked him.

Heston has been a favourite actor of mine for years. His performance in the original Planet of the Apes film had a brooding intensity and who can forget the wonderful denouement, when Heston rages against the stupidity of mankind?

But sadly there is also Charlton Heston, the gun-toting chairman of the National Rifle Association who spent his later years appearing in Dynasty. It is hard to reconcile the Heston of the 1960s, who supported Martin Luther King and the Civil Rights movement with the reactionary Republican of recent years. What happened? Was it the Alzheimers? 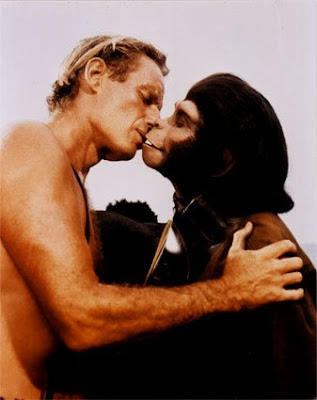 Posted by Steerforth at 7:00 am

Great little vignette. Lovely. I was just reminded, over on normblog, that Heston was in that wonderful film The Big Country. Of course it is Gregory Peck's film, and the music's, but I'd forgotten Charlton Heston was even in it, and that doesn't seem fair. He was great.

I first remember him in Ben Hur, of course, which came on TV one day when I was about seven and completely freaked me out.