What do these two pictures have in common? 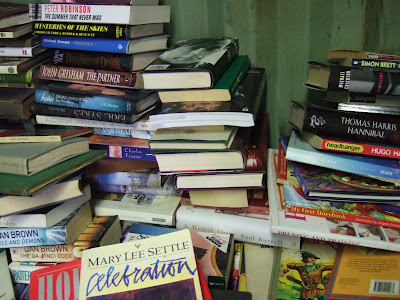 What's the common thread linking the items in these photos, which include a first edition hardback of Thomas Harris's novel Hannibal, a boxed VHS set of Sex in the City, videos of David Attenborough's documentary The Blue Planet and paperback copies of The Da Vinci Code and The Lovely Bones?

The answer is that they are all rubbish. Literally. Every item would have been dumped in a landfill site if the staff at the local refuse and recycling centre hadn't rescued them from people's dustbin bags. This is the room where all of the retrieved items are kept. There are CDs, picture frames, a bird cage, a four-volume Cassell History of England and, for some unknown reason, hundreds of golf balls. 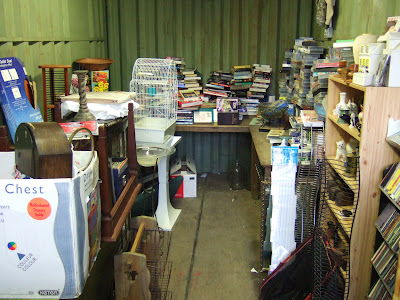 I realise that VHS cassettes are now obsolete, although I would have thought that there are enough people with VCRs who would happily pay a nominal sum for many of these titles. It is appalling to think that they are probably going to end up buried in the ground, poisoning the soil.

But what really hurt was the books. I can't bring myself to throw any books away, not because I think they're sacred (I've worked too long in the book trade for that) but because I know that there are people out there who will read them. The books in the photo included novels by Stephen King, John Grisham, Peter Robinson, Josephine Cox, Michael Crichton and James Patterson - all bestselling authors. I'm sure that if these books' owners had bothered donating them to the local charity shop then they would have sold.

I visited this dump earlier today and deliberately took my son with me, as he's going through a very materialistic phase and spends most of his spare time pouring through the Argos catalogue. So far I've failed to win him over and when, last week, I spent ten minutes explaining clearly and concisely why money doesn't bring happiness he replied 'Dad, that's the most stupid argument I've ever heard.'

However today I think I made an impression. He seemed genuinely shocked by the piles of discarded computer monitors, televisions and electrical goods and when we entered the hut with the books, I saw a look of dismay and incredulity. We walked back to the car in silence as if we were leaving a burial. I wondered what the world would be like for my son's generation and whether we would be able to change things before it was too late, then he looked at me and said 'Dad, can I buy a fish tank?'
Posted by Steerforth at 5:36 pm