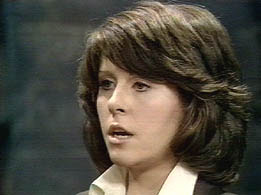 If you're of a certain age (i.e over 35 or under 15), then the name Sarah Jane Smith might warm the cockles of your heart. Voted the most popular assistant in Doctor Who's 44-year history, Sarah Jane Smith left the Tardis in 1977, making a triumphant return 29 years later.

Elizabeth Sladen's portrayal of Sarah Jane was more believable than some of the screaming, 'dolly bird' assistants that preceded her. She played a character who was outwardly feisty but had a winning vulnerability. 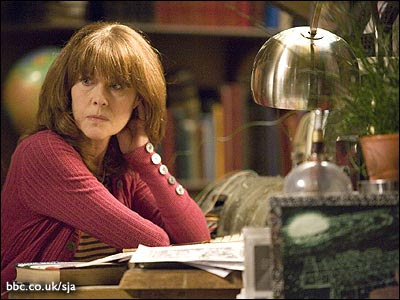 Shockingly, I read that today is Elizabeth Sladen's 60th birthday! How has she managed to age so well? Has she utilised alien technology to slow down the aging process?

19th April 2011 - I have just posted a brief Elisabeth Sladen tribute in response to the very sad news of her death. Click here to view it.
Posted by Steerforth at 6:25 pm

Yes. I have to say I watched The Sarah Jane Adventures faithfully and love the way they've developed the character. I particularly enjoyed the two-parter 'Whatever Happened to Sarah Jane?' Though the least said about me fancying a sixty year old woman the better.

There's nothing wrong with it - she's still a hottie!

I wish they would show the Sarah Jane Adventures in the US, but as they are showing Dr. Who and Torchwood here, maybe Sarah Jane will be in the not-too-distant future. She does look fabulous!

I have just seen her on BB1 morning news regarding todays Sarah Jane Diarys, and her face does not move, it is so tight.
It is such a shame that woman are not allowed to age naturally in this industry.

I'd like to second Silverback's comment... Elizabeth Sladen you will be sadly missed, I watched her in the 70's and I've been glued to SJA also, I think that life will never be quite the same now. RIP...

Oh no! That's shocking, sad news. I thought she was a wonderful actress and was really pleased to see her career take off again.

I shall do a Sarah Jane tribute post straight away.

A role model for doctors assistants and a big part of Dr Who's historic "brilliant" era. Three cheers for Liz who helped make TV worthy of bringing back for the latest Dr Who era and the Sarah Jane adventures. So sorry for her family but Liz/Sarah lives on in many happy memories.

My wife told me as soon as I got up and I just said, "Oh, no!" I don't think I've felt this bereft since Eric Morecambe died.

Shocked at her death, she
was just about my favorite
actress of any in the world
of TV entertainment, and I've
watched a lot of television
in 49 years.