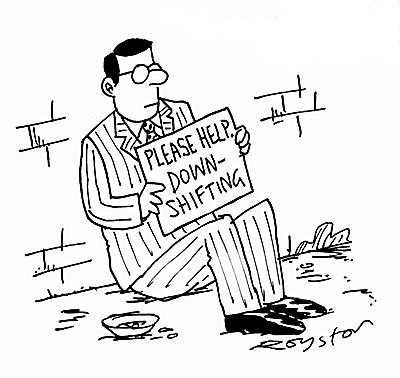 I am not down-shifting, as I never up-shifted in the first place, but my financial circumstances are becoming a little precarious and I've recently embarked on a drive to live more frugally. At first the prospect of tightening the purse strings seemed fairly depressing, but the reality has been quite different. Indeed, in many ways it has been liberating.

Until I sat down and looked at our finances I had no idea how much money we were wasting, either by buying things we didn't need or paying too much when cheaper alternatives were available.

With these few simple actions I have saved over a thousand pounds:
Ebay has been particularly useful. I have been selling proof copies and first editions of novels and although the results have been mixed (15 pounds for a proof of Ian McEwan's Amsterdam, but no takers for a signed first edition of Saturday) I have made a bit of money and cleared some space. I've also sold DVDs and CDs and as I parcel up each sold item, I feel a sense of relief. The house is becoming emptier and more manageable.

It's strange how, within two generations, we've gone from being oppressed by an absence of things to an excess of possessions. My mother remembers the constant worry of not having enough money to buy essential things like clothes. Today, many wardrobes are bulging with unworn items.

I think things will change - they have to - and it's possible that the end of the consumer society as we know it will spell disaster, as our whole economy is based on persuading people to buy things they don't need. However, as long as we're not starving or shivering, we may be better off for it.
Posted by Steerforth at 9:28 am

I know where you're coming from. My wife and I shifted down a gear about a year ago. At first I panicked a bit too but making do isn't so bad. If there is one thing I'm starting to appreciate is how flaming expensive books are but you cope.

Yes books are expensive, but between charity shops, Ebay and Amazon's marketplace it's possible to read well without spending much.

The only annoying thing is when you read a brilliant review of a new hardback and it's twenty-five quid.

Last October I knew what it was like to be poor for the first time: 100 euros for a whole month! As a side note: books cost in Portugal between 15 and 30 euros, paperback being the minimum wage 427 euros. Imagine this...

But I see myself in your words. I've been thinking about using Ebay as well to get rid of some nice stuff I have around but seldomly read or listen to. How do you retrieve the money from Ebay?

You set up a Paypal account, linked to your personal bank account, then you can transfer money back and forth.

You wouldn't believe how my wife is so surprised at how everybody here in Portugal addresses others by "Dr" or "Eng" or "Arquitect" or whatever if you have a degree. It's crazy! I guess it's because we're so late considering other countries in Europe, that having a degree is still considered important. :p I'm still G. :p

Thanks for the tip. I have to check out paypal.