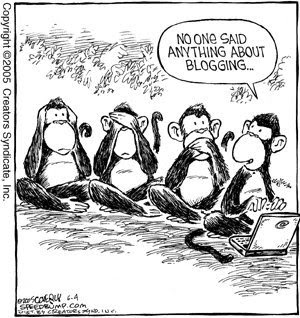 I know that this blog has become increasingly dull during the last few months. There are reasons for this, which I won't bore you with at the moment. To the few of you who still bother visiting The Age of Tedium, I promise to make amends in the not too distant future. But mine isn't the only boring blog. I have wasted an inordinate amount of time recently clicking the next blog button and visiting what is supposedly a random selection from the Blogosphere, although it does seem to favour Brazil for some strange reason.

I would say that at least 90% of the blogs I've seen are very dull. Most of them also seem to fall within a rather limited number of categories:

I have just decided to give some substance to my rant by doing a quick blogsurf and it has confirmed my prejudices. I found two baby sites - one child was called Peyton, the other had the even more absurd name of Londyn. The USA certainly has cornered the market in silly names, but wherever the Americans go, Britain blindly follows and we are catching up.

I found a couple of Asian teenager sites with sentences like these: here we are ^^ -he is my secondary skul fren- frenship forever k?! n...dun scare of driving lar...

I've no idea why President Ahmadinejad should feature so prominently. The worst thing is that a lot of what he says make sense. Maybe there's a Muslim fundamentalist inside me waiting to get out, as I also once found myself thinking that Bin Laden had a point as well. But would I have to believe in God and grow a beard?

I once set myself a target to find a site that would be interesting enough to bookmark within 50 clicks. I failed. There were no John Selfs, Fiction Bitches or Bookseller Crows. Not even the least book-related book-related blog that you're reading now. So if you're consumed with doubt about the point of blogging and the quality of your material, just look at the competition. 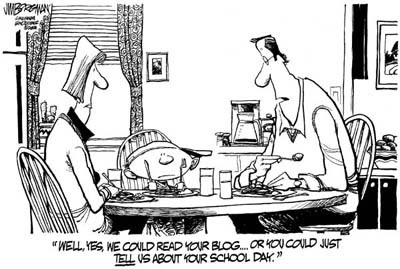 Posted by Steerforth at 5:57 pm

Yes, we've all been there clinging onto that belief that that really cool blog that's exactly what we're looking for is just one more click away. Knowing the web is full of crap is one thing, wading though it is quite something else. I do find it depressing trying to find people out there of like mind. Usually what I do is click on every link on someone's site to see who they read. It's a chore whatever way you look at it.

Have you tried this one, http://culturalsnow.blogspot.com/ ? One of the few I still visit most days (apart from yours). He's also got some good quality links on his page.
And Nick too, at
http://nickhereandnow.blogspot.com/

Hi Steerforth, thanks for the mention. If you don't already do so Sarah is well worth a visit
http://sarahsbooksusedrare.blogspot.com/

As is Caustic Cover Critic (who is actually not very caustic.
"http://causticcovercritic.blogspot.com/"

For laughs it would be impossible to beat
Antonia at Whoopee
http://yetanotherbloomingblog.blogspot.com/
Who I don't even link to because almost every time I read her, I think I, along with the rest of the internet, may as well give up.
There is a literary connection there, too.

Thanks for the tips - they're all bookmarked. I particularly enjoyed Cultural Snow, Antonia and the wonderfully obsessive blog about book jackets.