What's going on with McDonald's? I thought the whole idea was that the food was crap but at least it was fast and cheap. The other day I visited one of their restaurants for the first time in years, forced there by torrential rain, insatiable hunger and the absence of any alternative.

At first everything looked normal. There were the usual crackhead mums shoving fries into toothless infants whilst checking their phones for texts, a couple of old ladies hiding in the corner wistfully remembering the Lyons tea rooms and a lad in a shell suit who wasn't eating anything but seemed to be enjoying the atmosphere, judging by the moronic grin on his face.

But the food was completely different - healthy salads, fruit juices and wraps seemed to dominate the menu. Where were the quarterpounders dripping in grease, or the milkshakes consisting of 22 sugars and wood pulp (allegedly)? 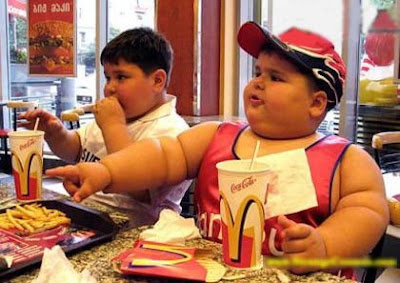 I tentatively approached the counter and asked for one quarterpounder and a medium strawberry shake (I took great care to remember to omit the word milk). A girl with very poor skin looked up and asked 'Dwanamildil?' Thinking that there was a misunderstanding, I repeated my order and she repeated her question, adding 'It's cheapar.' I nodded and paid double what I was expecting before being told that I would have to wait. Wait! What has happened to fast food?

Five minutes later, Fagash Lil ambled over and wiped my table. My God, it's almost waitress service now. I felt as if I had been in a coma for twenty years.

This must be the post-Supersize Me McDonald's, trying to claw back its market share after several years of declining sales. It was a strange experience, but I'm relieved to say that the quarterpounder and milkshake tasted the same as they did in 1994, right down to those bloody gherkins. Indeed, like cockroaches after a nuclear holocaust, I bet the gherkins will still be there in 50 years' time.
Posted by Steerforth at 10:38 pm

Excellent stuff! McDonald's did do the health thing a couple of years ago but I thought they had removed them all again, and recall an interview with one of their (or equivalent fast food burger chain) executives, who said, "People told us they wanted healthy options. It turns out they lied."

Which is fair enough. If you fancy a salad and smoothie, you sure as hell don't go to McD's.

By the way, you missed the other essential element of the McDonald's experience: an ill-motivated immigrant worker repeatedly swiping a mop against your feet as you try to eat.

Ah yes, the mop - I'd forgotten about that!

I think the people who wanted healthy options meant elsewhere, not at McDonald's. I can't say any of their lighter options looked remotely enticing.

True masters of the art of table wetting lurk, waiting for you to take the first bite of your food, before punging up the table next to you and neutralising, at a single squeeze of a hand-held spray gun, all taste buds within a six foot radius.

They teach this stuff in Catering college.

That's exactly what happened. Once Fagash Lil had delivered my burger she said 'Ang on love, ah juss ge'i awl clean f'yer' and produced a bottle of carcinogenic fluids.

I'd rather have taken my chances with the dirt.

Heh. I'm picturing Catherine Tate's Lauren as the girl behind the counter. Was she bovvered?

She was barely sentient. I think she'd been eating the food.