Not how I meant it to sound...

A DVD-sized package lands on our doormat.

'What's this?' asks my wife, who remembers that I promised to stop buying DVDs.

'Er...it's a pirate copy of a film Jenny Agutter made when she was 15'

It is only when I see my wife's arched eyebrows that I realise how this sounds. She knows that like most men of my age I have a thing about Jenny Agutter, but has it reached the point where I'm buying dodgy DVDs of films she made when she was underage?

I try to explain the plot of the film, saying that she plays a schoolgirl but I realise that I'm digging deeper. Admittedly the sight of Jenny Agutter in school uniform appealed to me when I first saw the film, but in mitigation I was a schoolboy at the time. What impressed me most was the ordinariness of the setting and Agutter's brilliant performance and I have wanted to see the film again for years, but it has never been released on DVD.

I convince my wife that if she watches the film with me, she'll understand its appeal. She is still not convinced but agrees to see the beginning with me. Ten hours later we are sitting on the sofa watching the film and within minutes my wife agrees that it is brilliant. 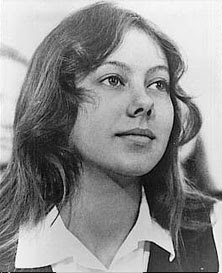 I Start Counting was filmed in 1968 and is set in an anonymous new town in the south of England. The film is ostensibly a murder mystery, but the thriller element is incidental as the real theme of the movie is change and growth. We see Jenny Agutter's character changing from a child into an adult against a backdrop of a town where old buildings and a traditional way of life are being destroyed to make way for the new. As for Agutter's acting, it was one of the best things I've ever seen.

It's a mystery why this wonderful film hasn't been commercially released when so much rubbish is available on DVD. I would have thought that Agutter's name alone would guarantee commercial success. There are some decent pirate copies available on Ebay and until the film's owners have the good sense to make it available to the public, I'd strongly recommend buying one.
Posted by Steerforth at 9:21 am