Doctor Who - the Gay Connection

Yesterday my six-year-old son came home with the latest Doctor Who comic. It comes out every two weeks and it's clear that the production team struggle to come up with new ideas and usually rehash the same photos every third or fourth issue. Luckily, because childhood seems like an eternity, my son never seems to remember.

This issue featured the usual assortment of monsters, but there was one radical departure in the form of a comic strip entitled 'The Battle of Reading Gaol'. As soon as I saw the title I did a double-take. It couldn't be, could it? But yes, it was all about Oscar Wilde. 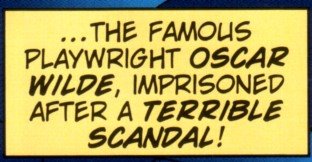 Someone at Doctor Who Comic must have have decided to have a bit of fun and the result is a brilliantly wicked story that must have gone over the heads of 99% of its readers. 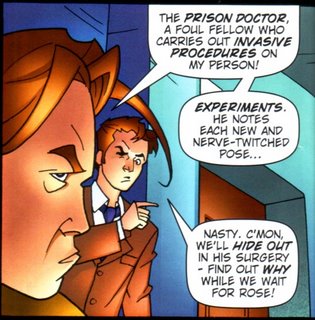 Reading my son's comic, I remembered how many gay people I'd met who loved Doctor Who. I once went to a party where everyone had to dress as a character from Doctor Who and I dutifully turned up in costume. The party was in full swing when I arrived, with several Doctors, the Brigadier and a variety of aliens dancing very energetically. I couldn't dance in my costume and decided to move into the garden where I was confronted with the unusual spectacle of seeing two Doctor Whos (William Hartnell and John Pertwee) snogging passionately. It was a rather surreal image.

At this point I realised that the lack of women and choice of music (Sylvester's 'You Make Me Feel Mighty Real') pointed to the fact that this was a very gay affair. I was fascinated. I had always assumed that Doctor Who fans were spotty, heterosexual males who lived with their mothers, but here was whole new subculture that I knew nothing about.

I decided to ask William Hartnell, once he had stopped kissing John Pertwee, why Doctor Who appealed so much. It was, he said, a mixture of things, but it was mainly the fact that here was a hero who wore crushed velvet jackets with frilly shirts, avoided fights and didn't have a girlfriend. He also confessed that he first knew that he was gay when he saw a cyberman at the age of five ('Ooh, they were just so dominant')!

It all made sense and when, over ten years later, the man who wrote the groundbreaking gay drama series Queer as Folk was chosen to revive Doctor Who, I knew that the franchise would be in good hands.
Posted by Steerforth at 8:41 pm