John Grisham and a stoat

Just when life seems predictable and mundane, bizarre sequences of events can happen out of the blue. For example, on a very dull, grey afternoon one February, I received a phone call inviting me to a reception for John Grisham that evening in the Harry Potter-like surroundings of the Middle Temple. When the call came I had been standing by a skip tearing up pieces of soggy cardboard wondering where my life had gone wrong. Four hours later I was drinking champagne under the watchful gaze of several Stuart monarchs in a medieval banqueting hall.

Three hours after that, I was back in Sussex being followed home by a stoat. 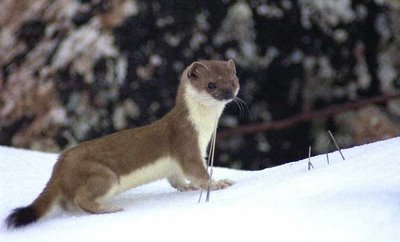 That is the beauty of bookselling. You can spend hours, days, weeks doing very dull things with boxes, forms and computers for very little money, but you know that at some point something extraordinary will happen. Perhaps Anthony Burgess will walk through the door (before he died, preferably), or maybe you'll find yourself recommending true crime titles to Jordan ('Cos me and Peter like to read a bit of true crime together when we're in bed').

And of course, last but not least, there are the books.

My top tip at the moment is Jose Saramago's 'Blindness'. Published by the wonderful Harvill, it is a compelling story set in an unnamed city where a plague has rendered the whole population completely blind. In theory the novel should be heavy going. There are no chapters, none of the characters are named (apart from a dog) and Saramago doesn't use speech marks, but after the first couple of pages I became so absorbed in the story I forgot about the unusual style.

In Britain we don't usually expect literary authors to be gripping as well as deep, but Saramago succeeds on all fronts. In addition to writing a novel that is as exciting as anything I've ever read, he also asks the reader 'What is it to be human?'. For those of you who believe in the 'Dunkirk spirit', you may not like Saramago's answer.

Posted by Steerforth at 9:11 pm

Yes, 'Blindness' is a gripping book, though I did have a problem with it - it seemed to require to be read as an allegory, yet didn't really fulfill those terms. Striking and affecting, though.

Blindness is a fantastic book! My favourite by Saramago, definitely. And a all-time personal favourite as well.

You know, just a small curiousity, he was born in this little village called Azinhaga do Ribatejo, just 40 kms from my city and I've always wondered how a man from such a place would reveal such a universal genious... He is a solid gold writer, that is unquestionable.

Finally, some good news about the movie based on the book: the Brazilian director of City of God is going to shoot it! I can't wait!

Brilliant! I usually have mixed feelings about turning books into movies, but I trust Fernando Mierelles. Also, a movie will result in more readers for Saramago's masterpiece.