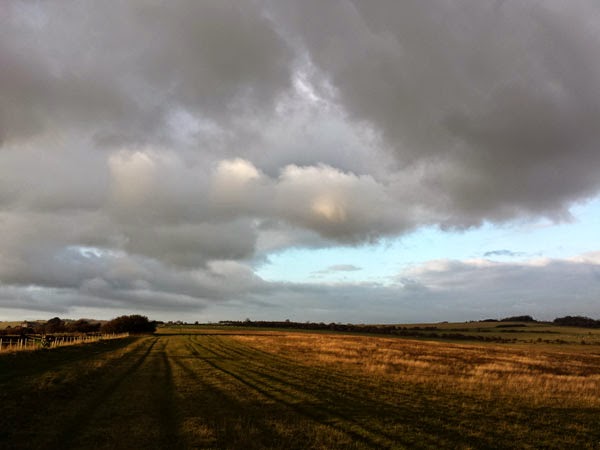 I've started to get into the habit of taking a regular 'constitutional'. I particularly like going for a walk in the late afternoon, when the light is failing and the shadows are long. The highlight of the journey is usually a flock of sheep, but yesterday I saw a familiar-looking figure: 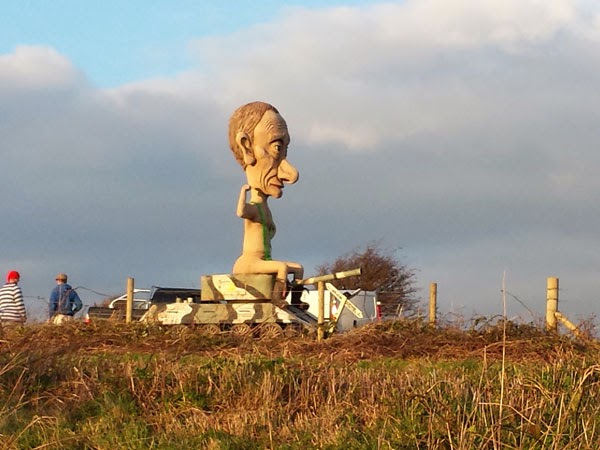 It was one of several effigies made by a Lewes bonfire society, ready for last night's procession. This year, they managed to alienate a sizeable number of people in both Russia and Scotland. They did  Kim Jong-un last year. I think they're gradually working their way around the globe. 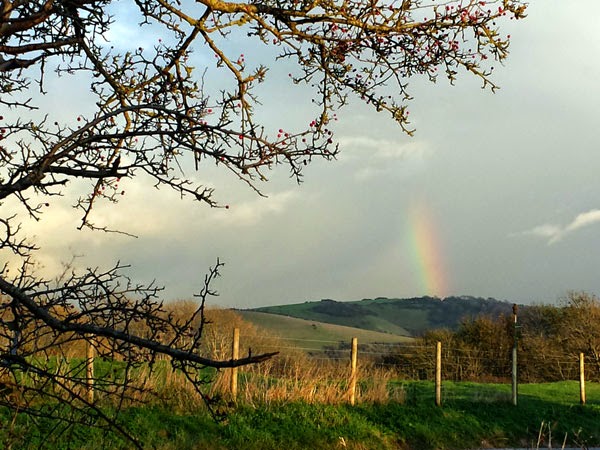 I have mixed feelings about Bonfire, as it's known here. On the one hand, I enjoy the sense of anarchy and the sheer spectacle, but it also reminds me how isolated we have become as a result of my older son's difficulties. When we first moved to Lewes, I assumed that one day we would all dress up as a family and join the procession. I now realise that will never happen. 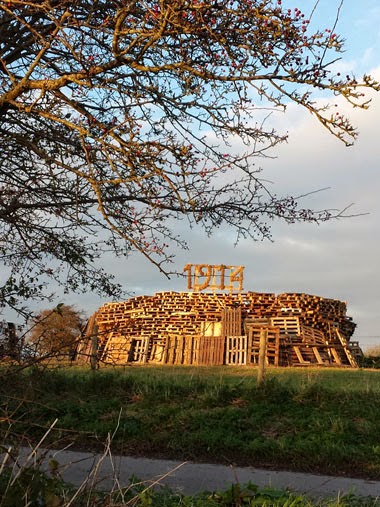 This morning, my wife and I took our younger son to the Museum of London, where he was supposed to be studying the Romans: 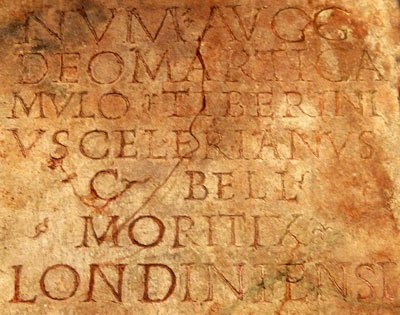 I don't know why, but I just can't get excited about the Romans. They came, they saw, they conquered. Then they left.

On the other hand, the prehistoric gallery was surprisingly fascinating, reminding us that elephants once grazed by the banks of the Thames, whilst people lived in straw huts in a landscape that was mainly marshland and forest. A flint tool from around 450,000 years ago was genuinely awe-inspiring.

Every gallery was really well curated and arranged in a way that created a strong sense of a narrative. My son loved it and we all resolved to make a return visit.

After the Museum of London, we walked to the Tower of London through a particularly ugly area. This picture is from Wikipedia, as I forgot to take one: 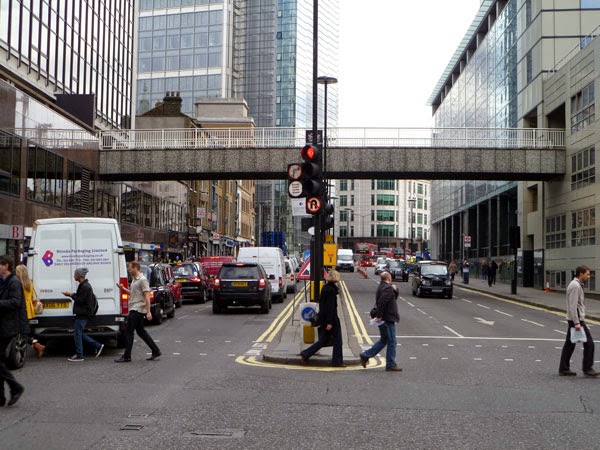 A combination of bomb damage and bad planning has largely ruined this part of London, but it's a thriving business district and we walked past countless glass office buildings, watching a succession of very earnest-looking people having meetings. In one office, the computer screensavers said "Client Focused", as if it was something special.

The thought of having to sit in a meeting, listening to humourless people talk complete bollocks on a daily basis, sent a chill through my heart. I remembered being subjected to 'brand wheels', KPIs (key performance indicators) and 'upskilling' (training). It was awful.

Fortunately, just as I becoming a little grumpy about the business world, we arrived at the Tower of London and saw this incredibly moving tribute to those who died in the First World War: 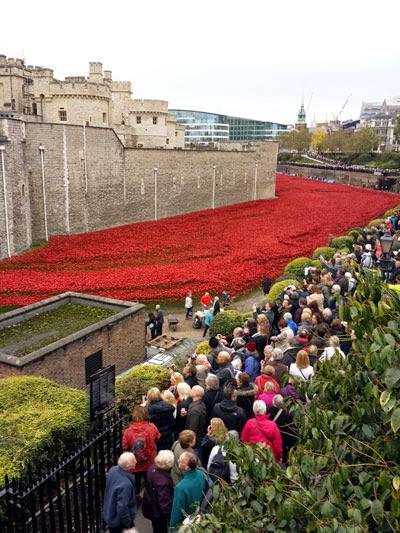 880,000 artificial poppies. One for each person who died, painstakingly placed in the ground by volunteers.

I was also extremely moved by the huge crowd of visitors (there were several thousand when we arrived), some of whom had travelled a long way to look at the display. A few had simply come to see the spectacle, but I suspect that many were paying tribute to a lost grandfather or great-uncle, and felt that one of the poppies was theirs.

N.B - Click here for some stunning photos of the full display.
Posted by Steerforth at 12:36 am

Yes, the poppies - I visited before half-term, mid-week and it was then possible to walk around amongst people talking quietly in many different languages... Imagine being the person who first put this idea up to some committee or other - perhaps a bit like the hideous meetings you saw behind glass... How wonderful that the idea wasn't pooh-poohed, but taken up and done so beautifully..

You may not realise it, but you do 'dress up as a family' each and every day.

That's Barry Norman not Valdimir Putin that the good people of Lewes burned.

I think the thing that puts us off the Romans is the way the subject is taught.I had six years of learning Latin and six of Roman history, and emerged fully equipped to fight in a Roman legion or pursue a Roman court case (and I was a teenage girl!)- but of daily life amongst the Romans I knew zip.

It was not till recent years, especially since the Internet, that I've been able to catch up with the roundness of their customs, belief systems, and art (and I'm not there yet).

Have a look at this blog by my Italian friend and get a glimpse of the wonderful Roman things they could have been teaching us about instead of all that war and weaponry.http://bat-bean-beam.blogspot.co.nz/2013/09/crepereia-tryphaena.html

The alternative knowledge and way of looking at Roman society as a whole was always there - we were just caught up in a pedagogy system that reflected the values of a boy's public school of the 1880s.

Yes those early galleries at the Museum of London are brilliant! And the Roman bit is off-putting - a bit like Oxford Street at Xmas - all shops and crowds and people shouting. That wasn't all of Rome, either. And the City isn't all bad. ;-)

I'm envious of the places you have to take your walks. I have a polluted dirty commercial river (the Delaware, in Philadelphia) and an equally dirty city with ceaseless car horns and loud noises. I'm grateful for the pigeons and squirrels in the little parks, my urban wildlife.

Anna - That's a very good point about the poppies - it would have started with a meeting, but I bet nobody used the words tranche, upskill, relocate, rebrand or product.

Dale - I shall look at the blog, as I'm determined to overcome my prejudice. The Romans is one of those subjects, like sport, ornithology, China and jazz that I struggle to find an interest in. I don't know why.

Lucy - I agree that the City has some often hidden gems, but I wish Wren's original plans had found the financial backing. Perhaps that would have protected a larger area from some pretty hideous architecture.

Joan - It is lovely up on theDowns, but even there you're never completely free from the roar of the traffic in the distance. I wish we could have the occaisional traffic-free day.

I'd like to think, Steerforth, that they didn't use "trope" or "meme" in that meeting either.

The other view on the Tower of London poppies is, visually arresting as they are, that they contribute greatly to the tide of sentimentality which has washed over the WWI anniversaries. This shows itself in many ways,from the apparent need to deck Strictly Come Dancing competitors in poppies to the shanghaiing of football matches by the military, complete with full battle dress, marching, flags, medals and huge presentation poppies.
The art critic of the Guardian suggested that the Tower moat should have been filled with the artistic equivalent of blood and bones - the better to bring home the reality of the 880,000 deaths. I'd rather this approach, I think, than, as has happened, finish up with something which suggests the tear-jerking end frames from Blackadder Goes Fourth but squared and squared again.
I saw a picture today which showed the moat as it was during the Great War. It had been converted to vegetable production. I wish we'd thought of something as practical (and useful) a century later...

Sorry about the numerous typos. I made the mistake of writing the last comment on the keypad of a smartphone.

Roget - You have a fine nose for cant and hyperbole, but on this occasion I beg to differ. I think the poppies were a splendid idea and although they may have prompted a sentimental, maudlin response in some quarters, the original idea is a noble one that eschews jingoism and melodrama.

Perhaps there is a meme behind the extraordinary response to the display - over 4,000,000 visitors to date - which is the same one that is behind the advent of UKIP: a nation with an identity crisis that is venerating its past as an comforting alternative to the complex, multicultural, post-referendum present.

Wow, the display of poppies is really impressive. I like to believe that one was for RCAF Officer Fred Casher, whose plane crashed in the Yorkshire moors in February of 1945.

Oh, and those pesky Romans? In addition to building Hadrian's Wall, they also built a lot of aquaducts and bridges, in addition to just conquering and leaving! :)

Those poppies were very nice, and incredibly moving. I was in London to see Kate Bush, and as a secondary pleasure, meet the Ravenmaster at the Tower of London for a chat about...ravens. The poppies were a complete surprise. Nevertheless, you could still say I traveled all the way from western Canada to see them.