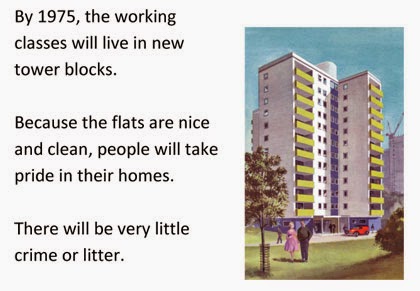 Ouch! Well, it's good to have ideals, I guess.

I'd kill myself. I used to work for an investment company that built and managed places like this. We could never keep them 'nice and clean' because the tenants kept ripping out the trees, throwing garbage in the halls, writing graffiti .... you get the picture.

It's a failed social experiment. These blocks may be fine for affluent, childless professionals, but as living spaces for families, the elderly and the socially feckless, they have been a disaster. I read JG Ballard's 'High Rise' recently - a superb satire on this theme.

So, that kind of thinking has never anywhere worked in the US...

Oh, my question as been answered by the first three commenters.

Hang on. So that's NOT one of your excellent Ladybird piss takes? It must be.

When I was growing up in south London, a lot of my extended family lived in places like this. The stairs and malfunctioning lifts always smelt strongly of piss (a dog is a man's best friend because they have so much in common?). It was strange moving to Spain, because most urban people live in high rise flats and it's not a social failure and it has no associated problems. What was it that didn't work in the UK?

It's fakery. I only wish I was more skilled at the graphic design bit.

It is interesting how apartment living is so natural in some cities, but became a problem in the UK. Perhaps it's because over here, the poorest people were dumped en masses into tower blocks, creating concrete ghettos. Compare the continental apartment block - elegant and functional, manned by a concierge - with the grim British equivalent and it all makes sense.

Oh dear! Is that from the Ladybird Book of Ideal Homes?