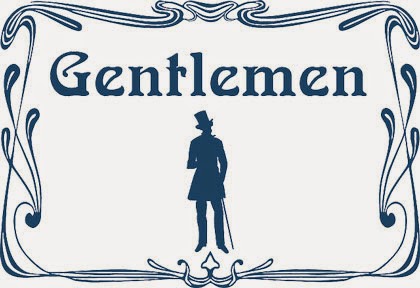 I had a slightly disconcerting experience in the gents' loo of a restaurant last night. As I walked in, several men turned round and looked at me with a mixture of incredulity and contempt. It was very unsettling.

I quickly checked myself in the mirror, but couldn't see anything out of the ordinary. The men left and I resolved not to give in to any feelings of paranoia, but in the silence that followed, I became aware of some very strange atonal piano music playing in the room.

I can safely say that I have never heard piped Webern in a public convenience before and it only served to enhance the sense of unreality. Perhaps the restaurant manager was indulging his quirky and sometimes inappropriate sense of humour.

After a brief pause, the music continued. The new movement reminded me of the soundtrack to a particularly grim Eastern Bloc animated film. Outside, I could hear some innocuous folk playing in the restuarant. It was all very odd.

Then I finally realised that the music was coming from my pocket. I must have pushed an app button on my smartphone and the strange looks from the men were a perfectly rational response to a man entering the loo with atonal music emanating from his nether regions.

It was the second of two embarrassing misunderstandings this week. The first happened at my son's ninth birthday party.

For the presentation of the cake, I dimmed the lights and put on the third side of the Beatles' White Album, which begins with the song 'Birthday'. The candles were blown out and the boys seemed to be enjoying the music and having the lights off, so I left them to it.

I tried to explain, but I think it only made things worse.

I shall be glad when this week is over. In addition to public embarrassment, I had to spend most of Wednesday in the A&E at Haywards Heath, after my mother had fainted at a concert. Fortunately she regained consciousness quickly, saying "Well, they weren't very good singers anyway."

The doctor wanted to keep my mother in for tests, so that they could eliminate the possibility of a blood clot. Sadly, this meant spending six hours sitting in a cubicle, listening to my mother talking non-stop about other people's ailments. At one point I suggested that she should have a sleep, but she didn't take the hint.

Perhaps I'm being churlish, but six hours of "Doris with the neck needs to be near a toilet...There are a lot of coloured people working here...Brenda didn't pay me back for that pint of milk I bought...Vera's cross because the window cleaner didn't come on Thursday..." is five hours and 45 minutes more than I can take.

The one enjoyable moment this week was visiting the De La Warr Pavillion in Bexhill, just as the sun was setting over the sea. 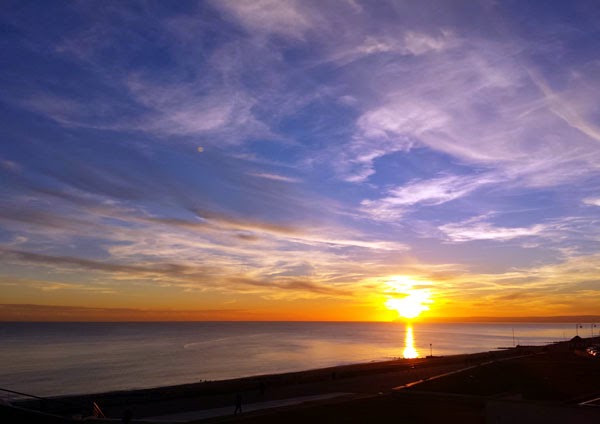 As long as there are moments like these, everything else is tolerable. Just.

Email ThisBlogThis!Share to TwitterShare to FacebookShare to Pinterest
Labels: embarrassment

Oh dear! I do sympathise, even if I admit I laughed aloud a couple of times. I hope your weekend is better.

I bet everyone else in A&E was wishing she'd put a sock in it too... Those cubicles are not soundproof.

No doubt they covered all this, but from the experiences of a couple of friends with elderly parents:

-- does your mother have low blood pressure? That can cause fainting.

-- if she's taking any medicine regularly (including over-the-counter stuff which Vera recommended) it's worth making a list and checking whether any of it conflicts. I would suggest asking her pharmacist or doctor, but you could also do some online searching. It's surprising how the unhealthy combinations can slip past doctors & pharmacists, and sometimes people don't admit the stuff they buy OTC.

-- and while you're looking for conflicts, check the side-effects of the drugs. Sometimes they can be replaced by a similar drug which won't have that side-effect.

Helena - We think it's low blood pressure, possibly caused by heart problems. My mother-in-law's 'gentleman friend' had similar symptoms and a pacemaker sorted him out. Her list of medication is longer than the Magna Carta, but this is supervised by her GP.

It's an odd thing being related to (and loving) someone you wouldn't choose to know socially. I suppose it will be my turn one day, but I hope I'll always have more interest in my sons' lives than my mother does in mine.

She's 85 today, so I'll have another afternoon of anecdotes about Kenneth's goiter.

Your mother sounds remarkably like my mother in law (93 and still living at home). We have had to spend interminable hours at A&E with her and the comments are quite unbearable - the racial ones she usually makes at the top of her voice. I hope they shoot me before I get like that..... :s

Oh dear. Sometimes life can be so stressful. I do hope things are settling down and that all will be well for the rest of the holiday season.

Take care of yourself, and have a nice restorative cup of tea and a biscuit. I find things always look better after that.

Love to you, xoxox Carol

This reminds me of the time I took my dad to the emergency room because he was coughing up blood. After a few hours he remembered he had bitten his tongue. When I got home that evening, I had been robbed of all my jewelry and some other items. Not a day to remember. I sympathize with you. May you have a better week. MDC

Kaggsy - It's extraordinary how long everyone is living. No wonder the NHS is creaking at the seams. During my time at A&E, I saw doctors diligently examining a few women who were so old, they looked like mummified husks and seemed barely aware of what was going on. It doesn't seem right to prolong life beyond its natural limits, unless it's accompanied by good physical and mental health. Like you, I hope they shoot me before I end up like that.

Carol - Luckily, my younger son is turning into a master baker, so every day I'm able to enjoy a restorative cup of tea and a slice of fresh cake.

M. Denise - How awful, after what must have been already been a stressful day in the emergency room, imagining the worst before discovering that it was a bleeding tongue!

I don't know if BBC downloads are available worldwide, but this programme featuring Atul Gawande is a very interesting discussion about old age, death and the changing relationship between parents and children.

Isn't it strange how the roles of parents and children seem to reverse as we get older? Great photo.

That same thing has happened to my husband! What is it with you guys?! Never happens to me, but then I have only a dumb phone, not one of the smart ones.

I should have said my 'stupid phone'. Seems that no phone is entirely dumb, or is it? Clearly mine is not capable of all the tricks the smart phones can do. I don't want a phone more multitalented than I.

I have a theory that it wasn't the Webern that bothered those gentlemen, but I won't expand on it in this family-friendly forum. :)

Thomas - I think the man on his knees was just looking for a lost contact lense ;)