It is an oppressively hot afternoon. Outside, an ice cream van is playing Greensleeves to empty streets and my youngest son is recreating jungle warfare in our neglected garden. The house seems curiously barren since we handed Maisy the dog back to her owners.

(Maisy's departure wasn't quite as straighforward as I'd anticipated. After a seemingly emotional reunion with her family, she ran away the following day and was discovered sitting on our doorstep. I can only assume that this and subsequent escapes were prompted by happy memories of long walks and Tesco's Finest dog food)

It has been a sociable weekend. Yesterday I spent a very pleasant afternoon at the Coal Hole in the Strand with a couple of friends from university. We argued about Twitter, agreed about the Olympics opening ceremony and recalled a rather unpleasant encounter I had with a vicar who worked in a boys' home.

We ended up in the Chandos where, to my horror, a young Australian barmaid had never heard of a Pernod and lemonade. I felt like a man who had been released from prison after a very long stretch.

I felt slightly fragile this morning, but when a friend reminded me that this was the weekend for the wonderful Heritage Open Days scheme, we decided to visit St Michael's Church in Lewes: 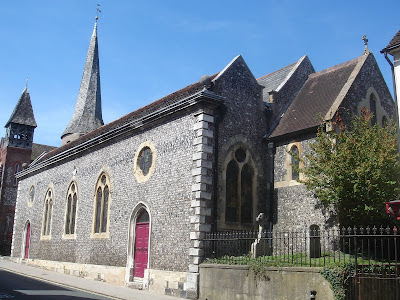 On the outside, St Michael's is a pleasant but fairly unremarkable medieval church, right next to a main road. However, it contains one of Lewes's hidden gems: a beautiful walled graveyard, tucked away between the Castle and some old houses: 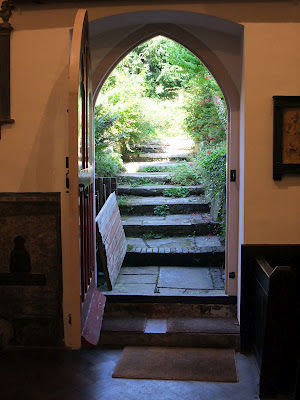 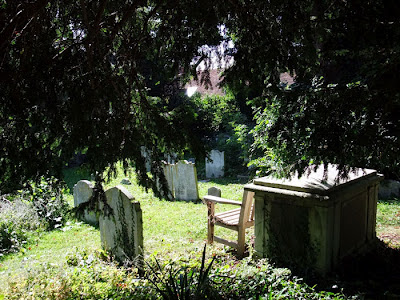 If ever I feel the need to get away from everything and enjoy an hour's solitude, then I come here. The bustling high street is only yards away, but there is an eerie quietness that evokes an older world and spiders' webs lie undisturbed. 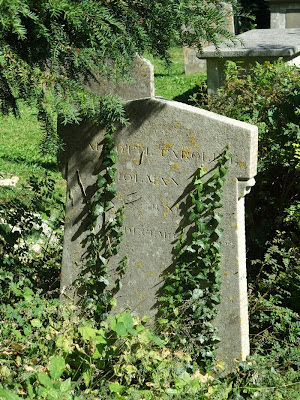 Beneath those rugged elms, that yew-tree's shade,
Where heaves the turf in many a mould'ring heap,
Each in his narrow cell for ever laid,
The rude forefathers of the hamlet sleep.
With Lewes Castle towering over the churchyard, you can enjoy the same view that Thomas Paine and his bride had, when they married here in 1771. 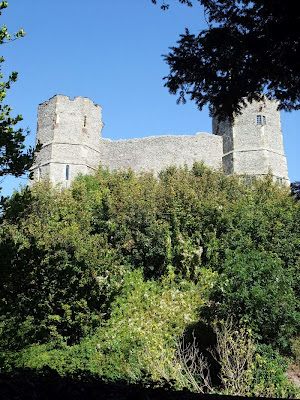 I wonder how much this view of St Michael's, from the top of the Castle, has changed in 241 years? I'd like to think that Thomas Paine would find 21st century Lewes reasonably familiar: 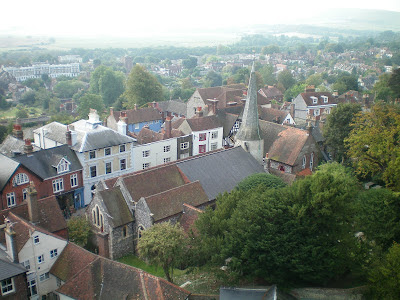 Posted by Steerforth at 2:52 pm

Paine would find it familiar, but he'd also find something to complain about. Because that's the sort of awkward git he was, fortunately.

There's something about the solitude and peace of old churchyards isn't there. It's funny, you don't hear a quote from Gray's Elegy for ages and then two come along almost at once.I am teaching myself 'How Enjoy Poetry' from a 1983 edition by Vernon Scannell. He quotes the Elegy as 'an impeccable demonstration of iambic measure'. Each line is in iambic pentameter. Clever old Gray to have done that and given us beautiful words at the same time.

So, that's where you go to Lewes yourself...

Great pun, Seamas. I certainly can't top that one!! xoxo

Tim - He was a git and also a wrong one, in several ways. I'd have rather have taken my chances in George III's England than revolutionary France.

Nell - I didn't know that, but I shall now be able to sound terribly clever if anyone mentions this poem.

Séamus and Carol - I must admit I was being a bit thick and didn't get it at first, because the town sounds more like Lew-iss. But when the penny dropped it made me smile.

What a great place. One of the good things about old towns like Lewes is that there are green spaces hidden away. There might be be gardens behind some of the town houses fronting right onto the busy street. I wonder if there are.

Jenny - I've just visited your wonderful blog and discovered some great articles that have whetted my appetite for travel. I shall be a regular visitor in the future.

I've done one of my Lanzarote posts this week; do drop by!