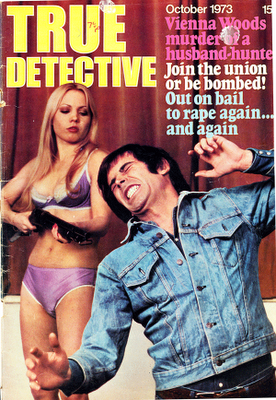 Every month or so, I buy a consignment of books from a house clearance merchant. There is a rather melancholy aspect to acquiring books that have become available as a result of death or senile dementia, but at least they are being saved from ending up on a landfill site.

Over 90% of the stock is disappointing: book club editions, out of date encyclopaedias and bestsellers by unfashionable authors like Howard Spring, Frank Yerby, Naomi Jacob and Frances Parkinson Keyes, but the remaining titles can produce a modest profit if you know what you're doing.

Occasionally I acquire 'private collections' that I'm sure their owners would have destroyed if they hadn't been caught short by an unexpected misfortune. I certainly won't forget the photograph album I discovered (I was going to write 'came across', but decided against it) which began with shots of a reasonably attractive blonde woman in saucy lingerie, but gradually revealed that she was more of a man than I'll ever be.

It won't be like this forever. These days, the darker recesses of the human psyche can be sated in the privacy of cyberspace, so the day will come when house clearances no longer reveal as much about people's hidden fantasies. Also, their books, photo albums and music collections will be conveniently stored in an object no bigger than a coin.

But in the meantime, there are plenty of gems. Today, I found a collection of magazines tucked away at the bottom of a box. This was my favourite: 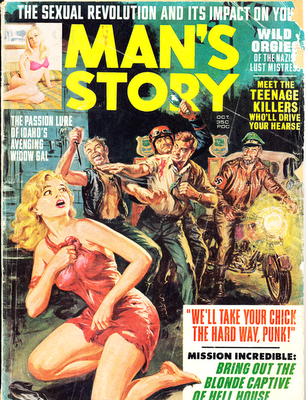 Judging by the many adverts for hairpieces and cures for baldness, I'd guess that the magazine was aimed at middle-aged men who had missed out on the sexual revolution and wanted a piece of the action:

THE SEXUAL REVOLUTION AND ITS IMPACT ON YOU.

This is the era of the swinger when anything goes and no holds barred. Yet it can become the time of your greatest frustrations as it has for many. 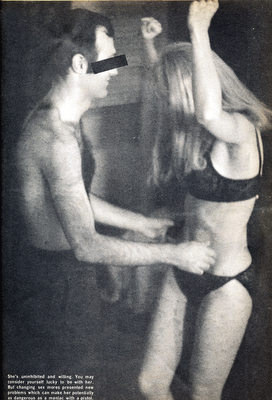 "I've done eveything they suggest in the Kama Sutra and then some. There's no possibility of committing the act that I haven't tried. And that goes for all the exotic buildups too. Frankly, sex is getting to be a nothing with me." The speaker is a 20-year-old coed whom we'll call Connie.

19 pages on, another article asks: "Is sex dead? Before you laugh at the thought, listen to what the experts are saying. You may be in for some startling surprises."

By now, you don't know whether you're coming or going, but luckily there are plenty of helpful products to help you negotiate your way through the late 1960s sexual minefield.

Let's begin with the hair:

Perfect. Those groovy chicks will dig your hair, but if you're not convinced that $20 will be enough to maintain the illusion of youth, there are more expensive alternatives: 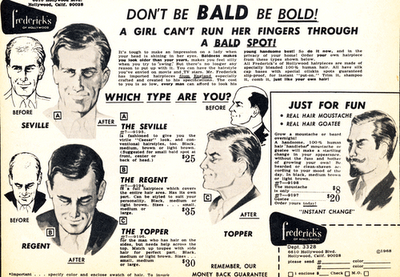 I think I'll go for the Seville, but although my hair now looks great, there's not much I can do about my appalling physique, or is there? 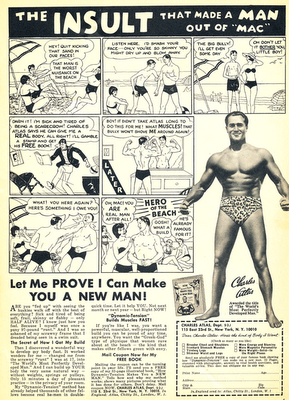 The Charles Atlas adverts were a staple of American magazines and comics long after this edition of Man's Story was published. Even as a boy, I hated this advert when I saw it in the imported Marvel comics that I was addicted to. For me, the 'weedy' man's transformation into someone like my PE teacher was a betrayal.

However, if you have managed to develop the perfect physique, you'll need a racier range of underwear: 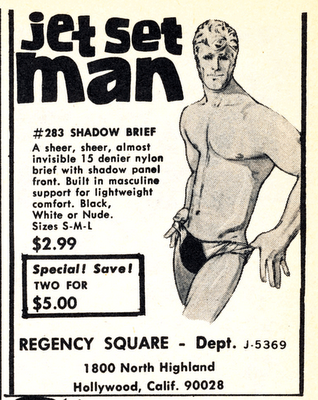 Now that you've transformed yourself from a balding, flabby middle-aged man into a 60s swinger, you can join the sexual revolution: 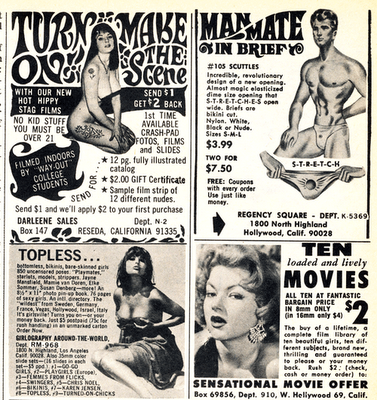 But how will you afford all of this sex? Fortunately, Man's Story is packed full of useful career advice: 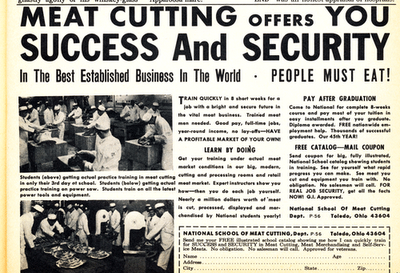 I'm not convinced that those swinging chicks would be attracted to a man who'd just spent the day cutting up dead animals. Surely it would be better to go for something like this: 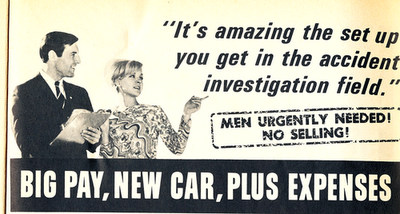 Sorry, no dames. Judging by this advert, in addition to a generous salary and a new car, you are also encouraged to have sex with victims of car accidents. Perhaps you might even meet someone like Collette Berne: 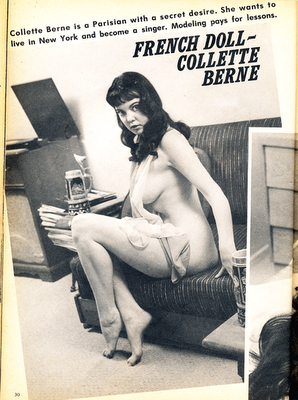 There are several photoshoots of 'aspiring actresses' who, posterity now tells us, continued to aspire.

As for the stories, they are surprisingly literary in tone - obviously the work of frustrated authors. To compensate for their dullness, the magazine's editors have added sensationalist bylines:

Through the vice-ridden cess pool of Oran, I clawed my way to the sinister abode on Rue de l'Aqueduc where the diabolical auctioneer dealt in lovely sex slaves and hideous slaughter... 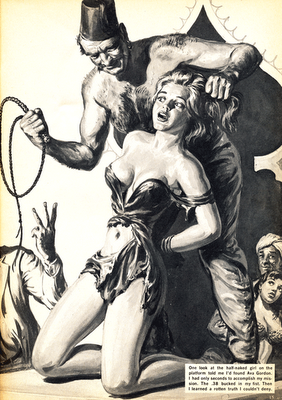 But the best has to be the Nazi biker story on the front cover:

You owe us something, Narko. And doll face here is your first payment." The way they looked at Arlene told me just how high their price would be.

However, beyond the humorous aspect of these magazines, the portrayal of women and the casual link between sex and violence makes me feel quesy: 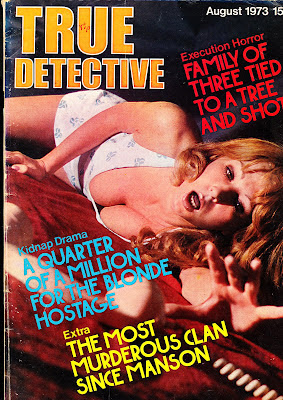 When I was at university in the 1980s, the pendulum had swung so far in the other direction that it sometimes felt as if we were living in a theocratic state, where even the most innocuous remarks could be branded as sexist and offensive. But after reading these magazines, I can see exactly why the reaction was so strong.

Ten years on, the pendulum had swung back again, but this time the sexism was 'postmodern' and 'ironic'. I don't think magazines like Loaded and Nuts have been our finest hour, but at least they didn't contain the awful sensationalist violence of their predecessors.

The one thing I really like about American magazines of the 60s and 70s is the adverts. You couldn't have got away with this in spoilsport Britain: 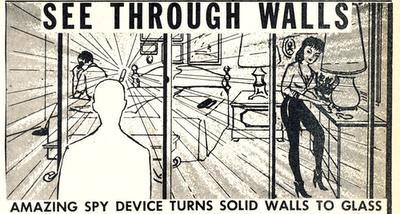 Posted by Steerforth at 8:31 pm

Ever thought of writing your own book of these little treasures you turn up? I'm sure there's a market for it.

I don't know why, but I find 'Meet the Teenage Killers Who'll Drive your Hearse' a peculiarly disturbing headline (or strapline or whatever those things are called). I suppose though, since the thing was published in 1968, they're actually pensioners by now - or very nearly. Whether they are still in the hearse driving business is a whole other question, I suspect.

Ah yes I was addicted to Marvel comics too, so is that why I remember the Charles Atlas advert? I seem to recall similar ones appearing in the small ads pages of the Sunday newspapers too. This whole post is funny, but. deeply disturblng too.

Martin - Sadly, working in the book trade has cured me of any urge to write a book.

zmkc - I've heard of drumming up trade, but that's taking the American entrepreneurial spirit too far.

Little Nell - Yes, it is deeply disturbing. I found the magazines quite repugnant, with their attempts to eroticise violence against women. I'm glad that values have changed, although they still have a long way to go.

Fabulous stuff. I too will mourn the day when everyone's past is space junk in cyberspace.